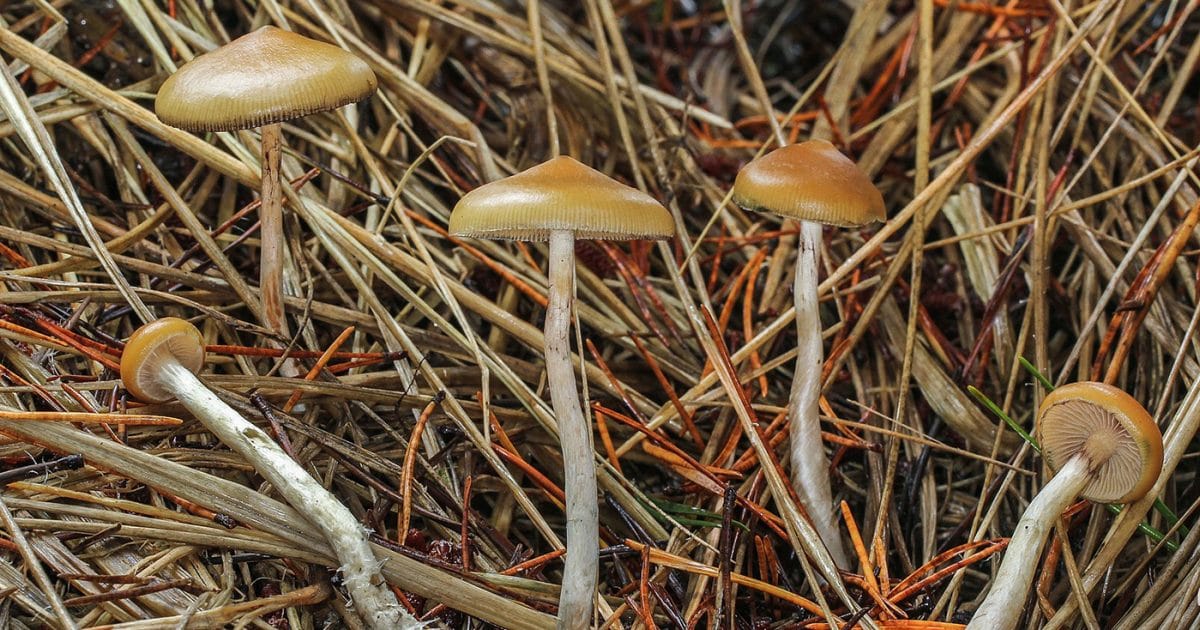 Psilocybe Azurescens: This Magic Mushroom is Stronger than What You’re Used To

While the well-known Psilocybe cubensis contain .14-.42% psilocybin, Psilocybe azurescens are packed with 1.78% psilocybin.

The genus Psilocybe contains some 180 species (with new species still being discovered) found within a broad range of habitats. With the growing acceptance of psilocybin’s medicinal potential, people are researching the genus in more detail. One of the species that draws attention—due to its potency and ease of outdoor cultivation—is Psilocybe azurescens.

The most well known of the Genus Psilocybe is Psilocybe cubensis (Earle) Singer, a tropical/sub-tropical species which often grows in cow dung.  They have a thick stem, a broad brown/yellow cap, and a skirt-like annulus.  P. cubsensis are very easy to cultivate, and publicised most notably by Terrence McKenna and his “5 grams in silent darkness”, something you probably wouldn’t want to do with Psilocybe azurescens!

Psilocybe azurescens are often referred to by a variety of common names: Azzies, Astoriensis, Flying Saucers, Blue Runners, Blue Angels, or Indigo Psilocybe. With their caramel coloured caps, bright white stems, and broad umbo (the “nipple-like” structure in the centre of the cap), Azurescens are quite distinctive in appearance, once you “get your eye in.”  To the untrained eye, many Psilocybes can look like any other LBM’s (little brown mushrooms) hiding amongst the undergrowth. The general advice is to know the features of the species you are looking for, but also the ones you are not. Members of the genus Galerina, for example, can be deadly, and many other lookalikes can be poisonous.

As the story goes, they were first found In 1979 by a group of Boy Scouts, camping close to the mouth of the Columbia River in Oregon. Some commentators assume they were probably known before this time, with local foragers referring to them as Psilocybe astoriensis or Psilocybe cyanescens var. [variety] “astoria ossip.” In 1995, mycologist Paul Stamets and his colleague Jochen Gartz formally described and named “Psilocybe azurescens”—after Stamets’ son Azureus, who had in turn been named after “Azure,” the color that psilocybin mushrooms bruise when damaged.

Azurescens grow naturally in a small part of the North American west coast, primarily Oregon, along the coastline near the Columbia River delta. They have been found in Washington, California, and British Columbia, with online groups now spreading them further afield. Their small natural distribution has led to a debate about whether they are an introduced species to the area; Stamets has suggested that they may have been introduced from debris washed down the Columbia from the old-growth forests upriver.

In their natural habitat, Azurescens are known to favor the land adjacent to the shoreline amongst coastal dunes, especially within clumps of the coastal grass Ammophila maritima, and lignicolous woody flotsam and jetsam washed downriver. They are found growing inland on deciduous wood chips and/or in sandy soils rich in ligneous debris. They grow in tight clusters (cespitose) or individually (gregarious). Azurescens develop an extensive and dense mycelial network. Their mycelium is very strong, holding on tightly to their myceliated (colonized) substrate (the material within which the “roots” of the fungi grow).

Their fruiting season begins in late September with the onset of colder weather and continues until “late December and early January,” according to Stamets’ book Psilocybin Mushrooms Of The World. As temperate wood loving Psilocybes, they can withstand cold temperatures of around  -4 to 20° C (25 – 68° F).

Mushrooms are the reproductive part of the fungus. The underneath of the cap are the gills (lamellae), where the spores (akin to seeds) are formed and ejected into the air so they can be distributed by air currents. By placing the cap on a piece of foil or paper, gills down, a spore print can be created to aid in identification, or used for cultivation. The color of most Psilocybe mushroom spore prints are dark purplish-brown to purplish-black.

Taxonomically, Psilocybe azurescens are described as having a dark caramel colored cap (pileus) that is three to ten centimeters broad, conic to convex in shape, and flattening with age, with a persistent broad umbo (the nipple-like feature). The surface of the cap is smooth, with a viscous appearance when moist, feeling sticky to the touch, with a separable gelatinous pellicle that can be removed if the cap is broken carefully. The cap is hygrophanous: As it dries out it changes color, becoming a dirty brown or yellow.

The edge of the cap (the margin) is often even, striate (meaning the flesh is thin enough around the edge to see where the gills join the cap underneath), and sometimes with a pale blue or azure color. The azurescens cap does not turn upwards to form the sine-wave shaped margin that P. cyanescens is so well known for.

The stem (officially called the stipe, when referring to mushrooms) can be nine centimeters to 20 centimeters long, by three millimeters to six millimeters thick. The stem is often white in appearance turning a dirty grey or brown with age. The stem is composed of thick, cartilaginous, fibrous mycelium-like tissue. The base of the stem thickens towards the ground and often has coarse white tufts of mycelium and white rhizomorphs.

Young specimens have a white partial veil resembling cobwebs covering the cap. This partial veil falls away as the cap expands, with the margin of the cap sometimes retaining a temporary white edge and an annular zone on the upper part of the stem that is often dusted with purple-brown spores.

An important diagnostic feature of the genus Psilocybe is the blue bruising; all parts of Azurescens, including the gills, bruise strongly blue or indigo-black when damaged.

Most people are likely to be more familiar with Psilocybe cubensis, the incredibly cosmopolitan species grown in cupboards and under beds all over the planet. In contrast to Psilocybe cubensis, Psilocybe azurescens are strong! Hold onto your hats, because they can be intense, highly visual, potentially hyperdimensional, and leave you wondering, “whoah…. What happened!”

One dried gram, or as little as a few dried shrooms, could be a potent dose, so psychonauts (or psilonauts) should be cautious with these powerful fungi. Their potent strength has also made them a popular choice for microdosing, since very little is needed to produce the intended effects.

P. cubensis contain psilocybin and psilocin at 0.14–0.42 percent and 0.37–1.30 percent, respectively—whereas, P. azurescens contain approximately 1.78 percent psilocybin, 0.38 percent psilocin, and 0.35 percent baeocystin, according to Stamets and Gartz’ account. Azurescens contain significantly more psilocybin than psilocin (psilocybin being more stable, deteriorating more slowly than psilocin) so that after a few months of storage in a cool dark environment, the mushrooms tend to retain most of their original potency.

Azurescens grow readily within mulched garden beds, since they like open shady areas, with reasonable moisture and deciduous trees. Known to grow near rhododendrons, rose bushes, and azaleas, they have also been found growing among blackberry and thickets of Scotch Broom.

This is not uncommon with the wood lovers, with P. cyanescens, and P. subaeruginosa also known to do well in urban environments.P. azurescens can be grown on a variety of plant  or wood derived substrates such as Alder chips (Alnus rubra) or other woody mulches.  Cardboard or burlap can also be used. The same techniques used to grow mushrooms such as Stropharia rugosoannulata or Lepista nuda, as described in Stamets’ book Mycelium Running, can be adapted to grow a variety of wood-inhabiting species. They can be started in small batches, then expanded, and in time be used to set up garden beds.

In recent years there has been increasing discussions in forums such as The Shroomery, and Facebook groups dedicated to Psilocybe identification about what is referred to as Wood Lovers Paralysis (WLP), caused by psilocybin mushrooms that grow exclusively on wood. There are reports that some people experience a loss of muscle strength and motor control that can persist into the following day. There is currently no satisfactory explanation, and a few theories abound, but aeruginascin is touted as a possible culprit.

Aeruginascin is very similar in structure to psilocybin, except it contains a third methyl group.  One of the main theories is that if aeruginascin undergoes the same dephosphorylation, as in the conversion of psilocybin to psilocin, the resulting compound would be very similar to bufotenidine, a toad venom which is known to cause paralysis. Due to their chemical structure (both contain a third methyl group), neither compound is able to cross the blood brain barrier and is probably confined to the peripheral circulation in the body, where they affect tissues containing the appropriate receptors.

This paralysis should not be confused with the overwhelming effects of a strong dose, as it can occur at relatively low levels of psychedelic intensity. WLP is a distinct physiological effect. The effect is known to be temporary, usually wearing off after 24 hours, but for the unprepared, it can be an anxiety-inducing experience. With these mushroom grow kits, you'll be sprouting spores in no time

Regardless of which psychedelic you take, set and setting play a critical role in your sexual experience. In fact, "they *are* the experience."