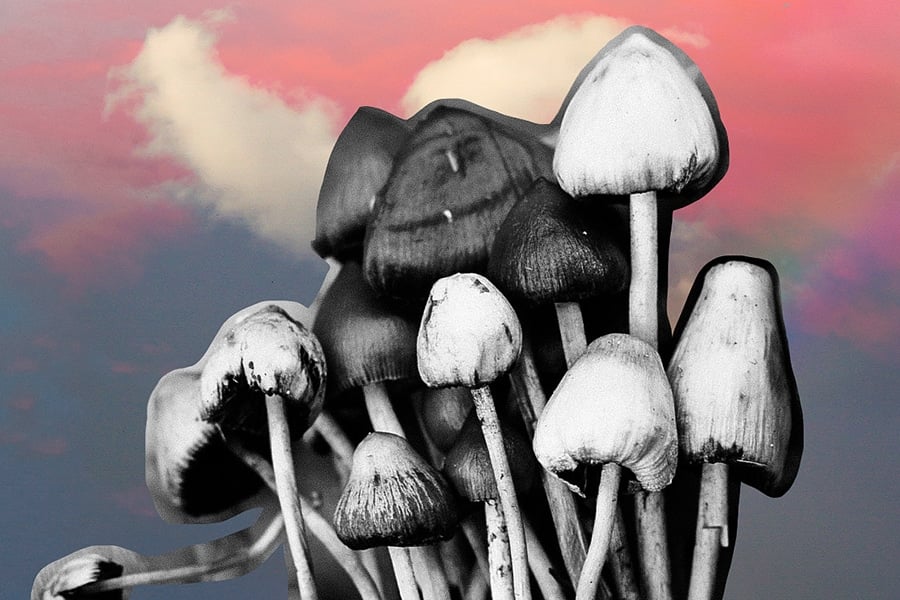 Redesigning Psychedelic Mushrooms to Never Cause a “Bad Trip”

The key to "good trips only" may lie in aeruginascin, the CBD of psilocybin mushrooms.

Tripping on psychedelic drugs can often be a gamble, but imagine if you were guaranteed to never have a “bad trip.” It’s not so hypothetical. A Washington startup dedicated to developing novel psychedelic formulations is in the process of making a “magic” mushroom devoid of “bad trip” potential.

CaaMTech, a small research lab based in Issaquah, aims to make custom blends of psilocybin mushrooms that have “optimized properties,” rendering psychedelic medicine more personal and unique. One compound they’re especially interested in is called aeruginascin (pronounced air-oh-gen-oh-sin), a rare fungal chemical some experts say will reduce or even remove the potential for negative psychedelic experiences.

For this reason, CaaMTech’s version of aeruginascin has the working title “Prophoria,” as it allegedly curates euphoria or intense pleasure. If it works as promised—and some evidence suggests it might—it could eliminate negative, challenging, or dysphoric psychedelic mushroom experiences.

“We’re thinking that preventing bad trips could increase the patient success rate,” chemist Andrew Chadeayne, CaaMTech’s founder and CEO, tells DoubleBlind. “We want to come up with a way to at least give people the option of increasing the probability for a euphoric experience versus a dysphoric experience.” Aeruginascin, Chadeayne says, “could be a really important molecule.”

Research into this chemical could not only make psilocybin therapy more attractive to folks unwilling or unable to weather dark psychedelic trips, but it could also shed new light on the human relationship to fungal molecules. Chadeayne and others believe that there is an “entourage effect” in mushrooms (a similar phenomenon allegedly takes place among some cannabis compounds), meaning the many chemicals found in psilocybin species work together to create specific experiences.

There is an “entourage effect” in mushrooms…meaning the many chemicals found in psilocybin species work together to create specific experiences.

Certain strains of cannabis are bred to highlight certain cannabinoids or terpenes—chemical compounds and aromatic structures the plant makes that can have differing psychoactive effects. Chadeayne wants to harness this theory in order to inform psilocybin drug designs tailored toward specific patient populations. He imagines mushroom blends could eventually be labeled similar to cannabis products.

“Maybe it turns out that I want a one-to-one ratio of psilocybin and baeocystin, [a similar mushroom chemical]. You could buy a pill, formulation, or gummy that has those ingredients,” Chadeayne says. “You don’t even know what you’re throwing away yet when you go to just pure psilocybin.”

But the story behind aeruginascin is more complex than it may seem. To begin with, it is only known to exist in one species of fungi. It also doesn’t seem to cross the blood-brain barrier, suggesting it’s inactive. Aeruginascin’s metabolites, however, may be what do the heavy lifting, according to some of Chadeayne’s unpublished research.

Aeruginascin may even be dangerous, as it has been linked to a uncommon, temporary condition called “wood lovers paralysis.” In rare cases, some people who have taken shrooms have reported their muscles locking up and being unable to move, however, this scary situation seems to resolve itself after a few hours.

This overlooked chemical could potentially change how we understand psychedelic medicine and pave the way for custom blends of psychoactive mushrooms beyond psilocybin. However, there’s still a lot we don’t know about aeruginascin: What is this mysterious molecule, does it actually work, and is it safe?

Only one mushroom on earth produces aeruginascin: Inocybe aeruginascens, a tobacco-colored species with blue bruises and green stains. It closely resembles another fungi, the fairy ring mushroom (Marasmius oreades), a choice edible with a distinctive nutty taste. This resemblance often causes accidental ingestion of aeruginascens mushrooms.

“Aeruginascin is now a hot topic in this wave of new therapy with psilocybin,” says Jochen Gartz, a German mycologist and chemist. He should know—he first discovered and named aeruginascin in the Eighties. Gartz, author of Magic Mushrooms Around the World, documented all the cases of accidental ingestion he could find. He says the idea of aeruginascin causing paralysis is unfounded. Furthermore, a momentary reversible paralysis does not exist in medical literature, he says.

“In many dozens of analyses I have found…no [cases of] ‘paralysis’ were ever seen in about 40 experiences, including accidental intoxications!” Gartz says in an email. However, in those cases of accidental ingestion, the unwitting trippers only had positive experiences, colored by euphoria and optimism—not the panic or anxiety that might be expected from accidentally taking a drug. There remain no case reports of negative experiences with aeruginascin.

Adding aeruginascin to psilocybin formulations could also make the medication more attractive to investors and regulators who are wary of psychedelics causing overwhelming negative experiences, even if these “bad” trips are relatively rare and can be managed by set and setting.

If all goes to plan by the end of 2021, psilocybin, the active ingredient in shrooms, will become an FDA-approved prescription drug, regulated by the same agency that oversees Adderall and hydrocodone. But psilocybin is remarkably unlike any drug in the Food and Drug Administration’s pharmacopeia of some 20,000 pharmaceutical products.

Some investors see psilocybin and psychedelics as the next billion-dollar industry because it shows potential to treat depression, anxiety, OCD, cluster headaches, addiction, and much more. But participants in clinical trials aren’t given fresh mushrooms picked off a cow patty, of course. They’re given pure synthetic, lab-made psilocybin instead. This makes it easier to dose accurately.

But psilocybin mushrooms—of which there are more than 180 species—produce many other compounds besides psilocybin, including baeocystin, norbaeocystin, psilocin, norpsilocin, bufotenin and of course, aeruginascin, at least in one species. The way these chemicals interact in the brain, if at all, is still unclear. It’s worth investigating what is potentially lost when drugs from nature become entirely synthetic.

The remarkable therapeutic qualities of plant and fungal medicines, such as ayahuasca or magic mushrooms, can sometimes clash with the Western model of drug development. Historically, pharmaceutical companies have forged singular, pure compounds focused on one molecular target.

But it doesn’t quite work that way in the wild, or as Chadeayne puts it: “Nature isn’t spitting up pure molecules.” When a plant evolves the ability to synthesize compounds, it doesn’t make just one chemical, but rather tends to produce several related compounds.

Think about how cannabis makes THC, the molecule that gets you “high.” The plant makes over 100 other chemicals that are structurally related to THC, including CBD, CBN and CBG. Each of these drugs have their own specific benefits, but scientists are beginning to understand how these chemicals work together to create synergistic effects.

This theory is called the entourage effect. While it’s not yet a scientific law and still requires much research, the evidence for it in certain species is ubiquitous. The entourage effect is what may give extracts of the Chinese tree Ginkgo biloba its cognitive-boosting punch. Other examples in nature may include Sonoran Desert toad venom (a blend of potent psychoactive drugs including 5-MeO-DMT, bufotenin and others), although some, such as journalist Hamilton Morris, have argued that the evidence for this is weak, bordering on non-existent.

Finally, there’s the concoction ayahuasca, which combines plants containing the psychedelic DMT with a vine that contains chemicals called MAOIs. When you drink it, DMT isn’t active, but the MAOIs (short for monoamine oxidase inhibitors), allow you to trip on it for hours.

Natural psychedelic experiences may therefore be a sum of the plant’s various parts, and fungi seem to be no exception. A study published last fall in the journal Chemistry described previously unknown chemicals in psilocybin mushrooms called beta-carbolines. These chemicals are MAOIs, some of which also appear in ayahuasca, leading the researchers to conclude that mushrooms produce “ayahuasca-like” and potentially synergistic metabolites.

Natural psychedelic experiences may therefore be a sum of the plant’s various parts, and fungi seem to be no exception.

However, fungal biologist Dirk Hoffmeister, the lead author of the study, isn’t ready to say mushrooms have an entourage effect just yet. “The beta-carbolines are very low concentrated in the mushrooms, too low, I’d assume, for a measurable pharmacological effect,” he says in an email. “Perhaps these compounds contribute somehow to the magic mushroom experience, but with the knowledge we have at this point it would be premature and speculative to make statements.”

Aeruginascin sheds more light on the entourage effect. However, the drug itself does not seem able to cross the blood-brain barrier, meaning it’s very unlikely to be psychoactive. So what is aeruginascin doing in the body, if anything?

The answer, which still needs more investigation, seems to be similar to the story of psilocybin. Psilocybin also doesn’t cross the blood-brain barrier easily. The body metabolizes it to create psilocin—this is the drug that actually causes a mushroom trip. (Feel free to whip out this pedantic trivia at a party the next time someone says they got high from psilocybin. They’ll love you for it.)

In results that are yet to be published, Chadeayne has discovered that a metabolite of aeruginascin, called 4-OH-TMT, is active at the serotonin 2A receptors, the same as psilocin.

“We’re really the only people in the world to know that this is active at the serotonin receptors,” Chadeayne says. This discovery could upend a lot about what we know about magic mushrooms. However, much more research is required. CaaMTech plans to test aeruginascin in animals later this year, but Chadeayne says they “want to know what it does first before we go tell other people that they need it.”

Psilocybin mushroom research is exploding with popularity, but as far as anyone I spoke to knows, CaaMTech is the only company actively exploring aeruginascin. Usona Institute said they are not studying it. Field Trip Health did not respond to a request for comment.

“It’s good to see so much research in this area now, with different molecules and substances,” Ekaterina Malievskaia, the co-founder of Compass Pathways, a for-profit company investigating synthetic psilocybin as a tool for depression, says in an email. “There is such huge unmet need in depression and other mental health conditions—patients need more innovation and more access to treatments that will help them.”

Aeruginascin could turn out to be the next hot drug in the evolving psychedelic space. Or it could turn out to be nothing at all, just another not-so-trippy artifact of the fungi apothecary. But it is a stark reminder of how relatively little we know about psilocybin mushrooms and how much they still have to teach us.

As we self-quarantine for Coronavirus, we're going to have a lot of time to contemplate our world today and our roles in it.