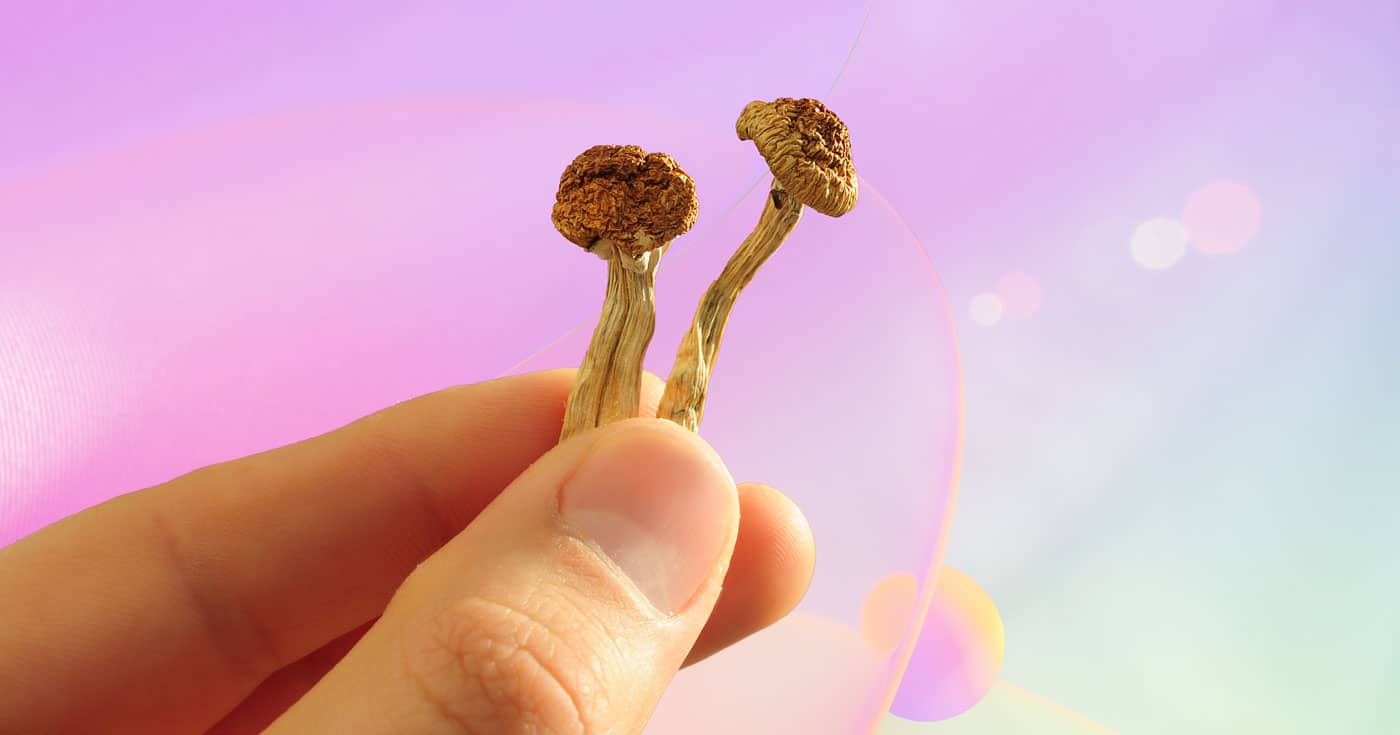 Mushroom Dosage: What is the “Right” Amount of Shrooms?

Mushroom dosage can be tricky, especially when different varieties come with different potencies. Here’s what you should know.

Table of Contents
1 Dosing Shrooms: How is Potency Measured?
2 Mushrooms Dosing Chart
3 What is a “Heroic Dose” of Mushrooms?
4 Microdosing Mushrooms
5 Factors that Affect Mushroom Potency and Dosing
5.1 Mushroom Species
5.2 Individual Biology and Psychology
5.3 Environmental Conditions
5.4 Preparation Type
5.5 Mixing Drugs and Medications
6 Caps vs. Stems: Is There a Difference?

Peering into a bag of generic psychedelic mushrooms and determining the right number to eat can feel a lot like Russian Roulette, even if it’s not your first time dipping into the diverse and mystical world of magic mushroom varieties. Over 180 species of mushrooms contain the psychedelic tryptamine compound known as psilocybin, and within each species, an even greater number of strains enrich the landscape with different varieties, different weights, and different potencies—all of which collide with your individual biology and psychology.

Dosing shrooms is tricky, but thanks to the guidance of mycologists, researchers, and psychedelic pathfinders of trips past, it doesn’t have to be a complete shot in the dark.

Dosing Shrooms: How is Potency Measured?

The potency of psychedelic mushrooms is measured by the amount of psilocybin present. Psilocin, a psychedelic metabolite of psilocybin, also contributes to the overall potency profile of a mushroom species. According to Paul Stamets’ foundational guide to mushroom identification, Psilocybin Mushrooms of the World, it’s helpful to know the species of mushrooms you’re working with along with the high-water-mark potency associated with that species (and this is a great book to keep on your shelf if you’re invested in identification and associated potencies).

Read: How to Take Shrooms

Potency may be measured as a percentage of dry weight or in milligrams. Take the commonly consumed species Psilocybe cubensis as an example. A single gram of cubensis that hypothetically contains 0.5 percent psilocybin by dry weight would contain 5 mg—or 0.005 grams—of psilocybin.

Doses used in clinical settings vary. One study utilized doses of 4 mg and 25 mg of psilocybin for participants experiencing anxiety associated with stage IV melanoma. Doses of 10 mg and 25 mg were studied for treatment-resistant depression. Point being, researchers are still figuring out the right dose for different people and for different purposes.

Unless you’re a participant in psilocybin research or a recipient of legal psilocybin-assisted psychotherapy (which, at the time of this writing, is no one except maybe time travelers), chances are, you are dosing mushrooms with untested potency. Oftentimes, the only information you have to work with is the weight of the dried mushrooms and maybe the species.

So, if you have an eighth (3.5 grams) of mushrooms, how much is the “right” dose? In DoubleBlind’s full guide to psychedelic mushrooms, author Michelle Janikian provides the following dosing guidelines, with the caveat that dosing and potency are complicated by many factors (we’ll get into that more below).

Take note: These dosing guidelines are meant specifically for the consumption of Psilocybe cubensis, the most common species. Other species may be more or less potent. For fresh mushrooms, multiply by 10 due to water weight. Always start with a lower dose to reduce the risk of an overly intense trip.

Naturally, increasing the dose means increasing the intensity; know that the experience usually lasts four to seven hours, with the most intense effects (the “come up” and peak) waning after the first two hours. If you’ve taken too much, remind yourself that it will peter out in time. Until then, try your best to ground and lean into the experience.

What is a “Heroic Dose” of Mushrooms?

A term made famous by ethnobotanist Terance McKenna, a “heroic dose”—or a “committed dose,” as he also called it—refers to a large 5-gram dose capable of “flatten[ing] the most resistant ego.” According to McKenna and others subscribing to a go-big philosophy of psychedelics, psilocybin mushrooms reveal their most important lessons at these high doses where the traditional structure of consciousness falls apart.

Dr. Roland Griffiths and others attempted to empirically describe the ineffable, mystical experiences initiated by high doses in a 2012 study observing participants given various doses of psilocybin up to 30 mg. Among those given a large dose, nearly all participants reported experiences of fear, fear of insanity, feeling trapped, and paranoia. Yet, a majority of the participants met criteria for what the researchers called a “complete mystical experience” and rated their psilocybin experience as “the single most spiritually significant of their lives.” Nearly across the board, participants receiving larger doses reported positive changes in their mood, behaviors, sense of wellbeing, and life satisfaction at the one- and 14-month check-ins.

There’s an important distinction to be made between the participants of Griffiths’ study and brave enthusiasts taking the plunge alone. In the mysticism study, participants were carefully monitored and supported by professionals throughout the intensity of their experience. For the solo adventurer, enduring the awe-inducing and often terrifying content of a heroic dose can be extremely difficult, especially if panic or paranoia sets in. As Dr. Matthew Johnson and others point out in their guidelines for clinical safety, psychedelics are not without psychological risk, but these can be mitigated with careful screening, preparation, and interpersonal support.

On the other end of the dosing spectrum is microdosing mushrooms—the practice of ingesting a small, sub-perceptible amount of psilocybin for wellness purposes. Microdosing is powered by the belief that tiny, semi-regular doses of psilocybin can reduce anxiety and depression while boosting focus, creativity, and mood.

You don’t have to look very hard to find someone eager to share success stories about their microdosing regimen, and self-reported research also paints a promising outlook. However, we’re still waiting for double-blind, placebo-controlled studies looking at microdosed psilocybin. It also isn’t clear what long-term risks might be associated with prolonged microdosing.

Two of the most popular regimens for microdosing psilocybin were developed by Paul Stamets—a protocol called the Stamets Stack—and Dr. James Fadiman, whose approach is outlined on his website dedicated to microdosing exploration.

Different species of mushrooms produce different levels of psilocybin and psilocin. For example, according to Stamets’ Psilocybin Mushrooms of the World, the species P. azurescens tend to be a lot more potent than the common cubensis. It’s a good idea to get to know the different types of mushrooms out there and how their potencies vary.

There’s endless conversation to be had about the unique ways our individual minds and bodies interact with psychedelics. Researchers have tried to identify some of the most important factors affecting our responses to psychedelics, such as in this 2012 study which looked at 24 different predictor variables like age, sex, education, personality, drug experience, and more. Besides the obvious importance of dose, here are the most important non-pharmacological variables they found associated with “pleasant and mystical-type experiences”:

The researchers found no significant response differences between male- and female-identifying participants. In line with other studies, weight or body mass index also does not seem to meaningfully affect subjective responses. Younger participants tended to have more anxious and unpleasant experiences than older adults, and researchers suspected this might have to do with the repertoire of coping and emotional management skills people develop over time and with life experience. Additionally, previous experience with hallucinogens “only moderately affected psilocybin responses.”

Psychological predispositions like emotional state and personality seem to have a profound effect on the perceived quality and intensity of the experience. In the end, studies like this tell us less about what we can expect for ourselves personally and more about the complexity of the psychedelic experience through various aspects of set and setting.

The impacts of nature and nurture affect all organic life, including psilocybin mushrooms. Knowing where and how a mushroom was raised can tell you quite a bit about its potential potency. Mushrooms intended for psychedelic enjoyment are often cultivated indoors and grown in specific substrates known to boost potency, compared to wild-grown mushrooms. Exposure to light and UV radiation is also likely to reduce psilocybin and psilocin levels of mushrooms. Older mushrooms may also be less potent as alkaloids like psilocybin degrade over time.

There’s more than one way to consume psilocybin mushrooms, which leads to the question of how different preparations affect potency. You can, of course, chew up whole mushrooms—or you can grind them into a finer powder or brew them into tea.

Read: How to Make Shroom Tea

Grinding up mushrooms for consumption can increase the surface area available for your body to absorb the psilocybin. Similarly, mushroom tea is essentially a psilocybin extract, delivering effects more quickly and intensely, according to anecdotal reports. For this reason, you might want to grind or brew less than you would eat in whole-mushroom form.

Psilocybin operates through our serotonin system—the same system that many antidepressant medications and other psychedelics interact with. The risks associated with combining psilocybin with other medications and drugs isn’t well understood, nor is it recommended for anyone with mental illness to try psychedelics outside of approved, supervised clinical settings. It’s always advisable to work directly with a trusted medical professional before making any decision to alter your regimen or combine drugs.

Also note that combining different drugs and psychedelics can often lead to unexpected intensity due to the fact that effects are sometimes synergistic—not additive (in other words, when combining some drugs, 2 + 2 = 5).

Caps vs. Stems: Is There a Difference?

Let’s end with a burning question that has cursed many attempts to fairly divide a stash of mushrooms: Are the caps more potent than the stalks? Or is the entire fruiting body fairly consistent in its psilocybin production?

A 2003 study from Japan analyzed the psilocybin content of six samples of cubensis and found that the caps were generally more potent. “The psilocin/psilocybin contents in P. cubensis were in the range of 0.17–0.78 percent/0.44–1.35 percent in the cap and 0.09–0.30 percent/0.05–1.27 percent in the stem,” study authors wrote of the data set. It’s not a large sample, but it’s perhaps the closest we’ve come to a real answer on the age-old debate.

The difference between any given stalk or cap may be subjectively negligible or pronounced; in the end, it’s wise to not to underestimate any part of these mystical, awe-inspiring fungi. Curandera Maria Sabina first introduced mycologist R. Gordon Wasson to Psilocybe Mexicana in the 1950s, he shared his story with the world, and the rest is history.