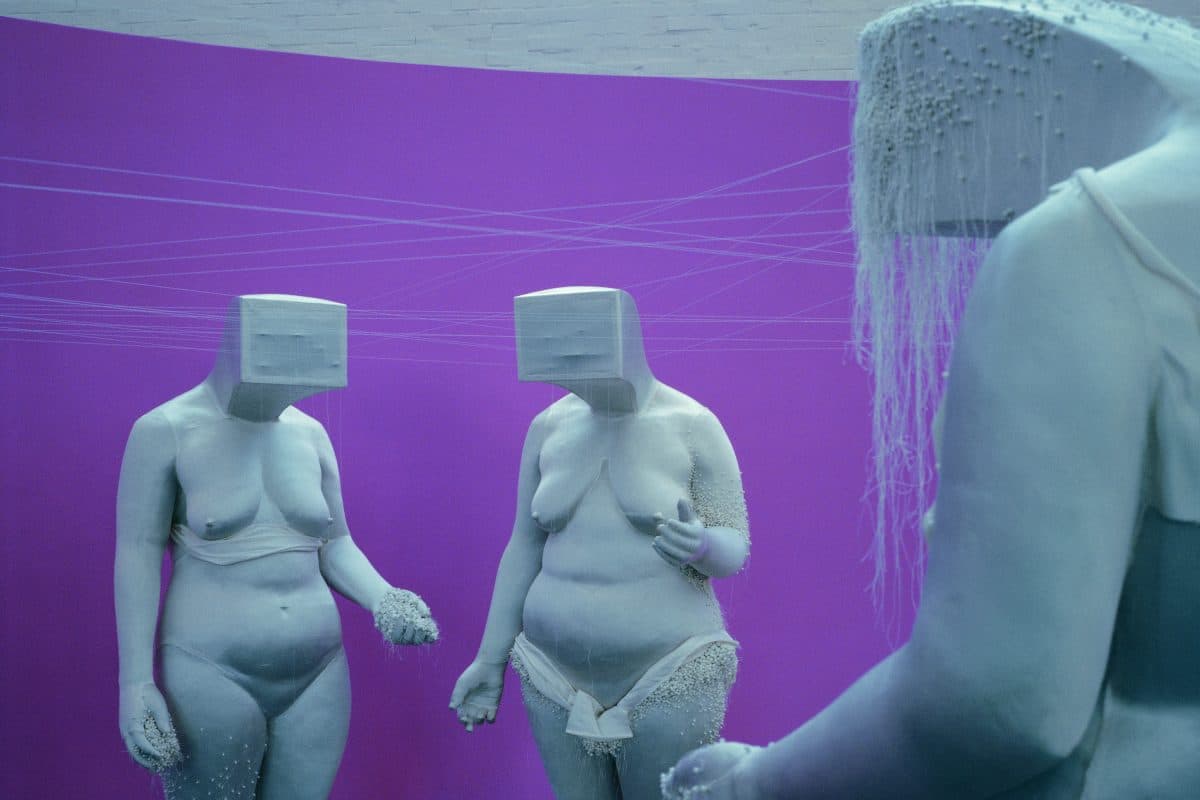 Beautiful and Grotesque Sculptures On the Burden of Womanhood

It is not rare for fabric to wrap itself around a woman’s body. Like language, and like other houses we build and inhabit, fabric can both caress and constrain; both free and arrest us. In the work of the extraordinary contemporary Chinese artist Lin Tianmiao (b. 1961), the female body both drowns in, and emerges from, elaborate costumes that inspire us to consider the forceful possibilities of womanhood.

Tianmiao, who currently lives and works in Beijing, has received significant attention and acclaim in art capitals across the globe, with shows in New York, Istanbul, Gwangju, and elsewhere. Her work, which often manifests as large-scale mixed-media installations, but also appears as paintings and sculptures, has confronted such notions as femininity, beauty, and gender representations.

The artist grew up in China, where she was nurtured by artistic parents. She had her earliest exposure to visual art during her father’s lessons in traditional painting and calligraphy. As a child, her mother, who was a dancer and researcher, also had her doing household chores—spooling cotton and sewing garments, for example—perhaps informing her use, to this day, of thread and day-to-day materials in her sculptures and installations.

A few years after she earned her BFA from Capital Normal University in Beijing, Lin Tianmiao moved to New York City with her husband Wang Gongxin, another prominent Chinese artist. They spent the tail end of the ‘80s and the early ‘90s in NYC, a period that Tianmiao has deemed formative in her career as a contemporary artist. Back in Beijing, Tianmiao and Gongxin circumvented their government’s censorship on the arts by launching ‘LOFT,’ an experimental art space in their home, joining a wave of alternative, independently-organized cultural initiatives.

Perhaps most striking in Lin Tianmiao’s oeuvre is her work on the female body. In various shows, she’s erected large-scale reproductions of female figures and bound them in elaborate costumes of her own making. In “Here or There,” exhibited at the Asia Society in New York in 2012, a number of mannequins were assembled as if in a costume and textiles show at a grand museum. The “gowns” they wore, however, seemed impractical, eccentric and even at times, grotesque. One figure had silky silver hair combed to the back—and front—of its head, with long grey braids spreading down over its back and chest. A large sphere covered the body from the waist-down, implying that the figure has no legs; just a round ball of black-and-white thread to keep it fixed to the ground. In another sculptural installation from the same series, a female figure was wrapped almost entirely in thick black string, with occasional strands of white, the fabric culminating in a long, course, black braid that trails behind her like a serpent, or a question mark.

After her stint in New York, Lin Tianmiao immersed herself in the practice of wrapping silk and cotton threads around objects, effectively transforming them—a technique she has dubbed “thread winding.” In “Here or There,” the objects she chooses to transform are mannequins, representing the female body. In a way, by creating these dramatic outfits, Tianmiao draws attention to the oppressive forces that act upon women’s bodies—much like the black, grey and white thread the artist employs. There is a kind of power in her creations, telling of a screaming inner desire to learn what it means to be a woman in this day and age, between worlds.

With the decriminalization of psilocybin, it's hard not to wonder whether magic mushrooms will follow the path of cannabis.

For the first time since MDMA was made illegal, patients may have "expanded access" outside a clinical setting.