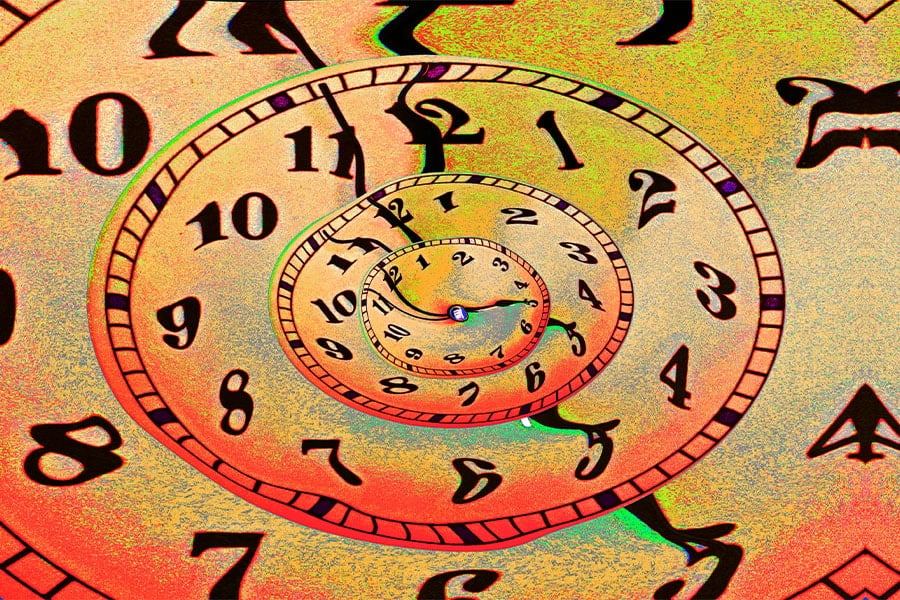 One reason that has contributed to the growing popularity of ketamine—both in medical and recreational settings—is its short duration. For a therapist providing ketamine-assisted therapy, a medicine with effects lasting around an hour makes the process very manageable: Ketamine therapy can be squeezed into a three-hour session, including talk therapy for preparation, as well as integration. A ketamine infusion can last under two hours, with a period of recovery. People who use ketamine in a social setting or for other non-medical purposes know that they will be back to a relative baseline within an hour or so, while knowing that they may not be back to full “normal” for the rest of the day or evening. But there are many other factors at play that influence ketamine’s duration, so the question remains—how long do the effects of ketamine last? Is there an afterglow? How long does it actually stay in your system? And does it show up in a drug test?

“Reactions and experiences may vary dramatically from person to person,” as Erowid reminds us, and the effects of ketamine can be anywhere from mild to extremely intense depending on the dose and a person’s tolerance, roughly lasting from 45 to 75 minutes. However, many factors affect the outcome, like the method of delivery—a.k.a. the route of administration (ROA)—the total amount of ketamine taken, the person’s experience with the substance, their age, weight and other individual factors.

The effects of snorted ketamine, the most usual ROA outside a medical setting, will last around 45 minutes. When consumed in this manner, the onset, which is the initial phase in which the user starts noticing the effects, is around five to 15 minutes. Some sources describe a second phase, called the come up, in which the plateau is reached, roughly 10 to 30 minutes. The plateau may last 20 to 40 minutes, ending gradually into the come down. Depending on the intensity of the experience, the after-effects may last several hours, or most probably the rest of the day. One can be sure to be back to normal after a good night’s sleep.

An intramuscular (IM) injection of ketamine is a method of delivery in which most of the medicine is absorbed by the body. The onset is faster, the peak is higher, and the overall duration is shorter. The effects are noticeable in under five minutes, after that the plateau is reached and may last 20 to 40 minutes, with a come down of about 30 to 60 minutes. Again, this last phase may last a couple of hours, or even longer depending on how high—or how deep—one goes. This is the method used by psychiatrists and therapists in their practices for the treatment of depression and other mental issues.

With intravenous (IV) ketamine infusions, the medicine is delivered through a dripper at a slow pace and clinics offering IV ketamine as a treatment for depression have settled in a model consisting of an infusion that lasts around 40 minutes, followed by a period of recovery of under an hour, where the patient waits around until they feel comfortable to leave on his own. With this method, the onset is practically immediate and the body absorbs 100 percent of the medicine, but as it is delivered during a period of time the plateau is not as high, making the come down also more gentle and subtle.

After IV or IM therapy, patients are usually advised not to drive a vehicle that day, as some cognitive and motor skills may be affected. After a treatment of ketamine, your whole day may likely be affected and not be back to normal for until the next day.

Oral ketamine produces a slower onset between 20 to 30 minutes with a longer plateau and a longer, though milder, overall duration of about 60 to 90 minutes and after effects that may last several hours.

However, one may argue that the effects of the medicine will last much longer than an hour, as its antidepressant properties, which are reportedly immediate, may stay with the patient for days or even weeks—hence its success when used for this goal by therapists, compared with other traditional antidepressant medications, which may take weeks to work or may not work at all for many patients.

How Long Does Ketamine Treatment Last—What About the Afterglow?

The afterglow period of classic psychedelics like LSD or mushrooms may last for days or even weeks. It’s a period in which the benefits of the drug linger in the user’s mind, a time in which the user will integrate the experience and remain in awe if it was a positive experience. The contrary is also possible: After a challenging experience, one might feel unsettled and distressed for days or weeks, even traumatized in case of a very challenging trip.

In the case of ketamine—not a classic psychedelic but a dissociative anesthetic with psychedelic properties—we can argue that its antidepressant effects are a kind of afterglow. If your life view shifts considerably after a profound psychedelic experience with ketamine, it makes sense that during the next days or weeks your mood will be lifted and your outlook for life will be more positive. The antidepressant properties of ketamine rely on both the psychedelic experience it provides, as well as the talk therapy that comes with it when used in a therapeutic setting, not to mention its biochemical properties (specifically, how ketamine is an NMDA receptor antagonist). Ketamine’s after effects are antidepressant and can last several days or weeks.

How Long Do Ketamine Treatments Last? What Affects the Length of Its Effects?

The duration of action of ketamine can be affected by a number of individual variables such as body mass, age, the presence of other drugs and the individual’s overall metabolism. A person with a larger body mass needs more medicine to achieve the same effects as another person who weighs less, which is why medical professionals adjust the dose depending on body weight in milligrams per pound. Age also affects the time that the body needs to metabolize the drug, with young people metabolizing the drug faster than older people do. Dosage will also affect the duration of action of ketamine making large doses’ effects longer.

How Long Does Ketamine Stay in Your Body?

Ketamine is metabolized in the liver and excreted through the urine and has a half life, meaning that the time it takes for the total amount of the drug in the body to be reduced by 50 percent is around two hours on average, and after that, the rest of the substance will be gradually eliminated in the next 12 hours on average. Generally, the bigger the dose, the longer it will stay in your system: 20 milligrams of insufflated (snorted) ketamine will have mild effects and will be eliminated faster than large repeated doses which will take longer to be metabolized, distributed, and excreted through the urine and will accumulate in the body in larger quantities. As a form of harm reduction, it makes sense to drink lots of water in order to flush away the substance to avoid its metabolites accumulating in the bladder, a known cause of ulcerative cystitis that affects heavy users.

Read: Yes, Ketamine Addiction Is a Thing. Here’s What You Need to Know.

As with the duration of action, a number of other factors affect the time ketamine stays in your system: the amount used, the frequency of use, the method of delivery, age, overall health and kidney function.

Can Ketamine Be Found in Drug Tests?

Ketamine does not show up in a standard five-panel drug test known as the SAMHSA 5, which is used to detect amphetamines, cannabis, cocaine, opiates, and PCP. A more exhaustive test will detect ketamine’s metabolites (the resulting molecules from the body’s metabolism) in urine up to five days after use, though more advanced forms of testing (which are also more costly and unusual) may detect it in urine for up to 14 days. Blood tests will detect ketamine 24 hours after use, but are also costly and less common. Tests using hair samples can detect ketamine use up to four months after use, but are rarely used, unless there is some form of legal investigation involved. Mushroom Dosage: What is the “Right” Amount of Shrooms?

Mushroom dosage can be tricky, especially when different varieties come with different potencies. Here’s what you should know.