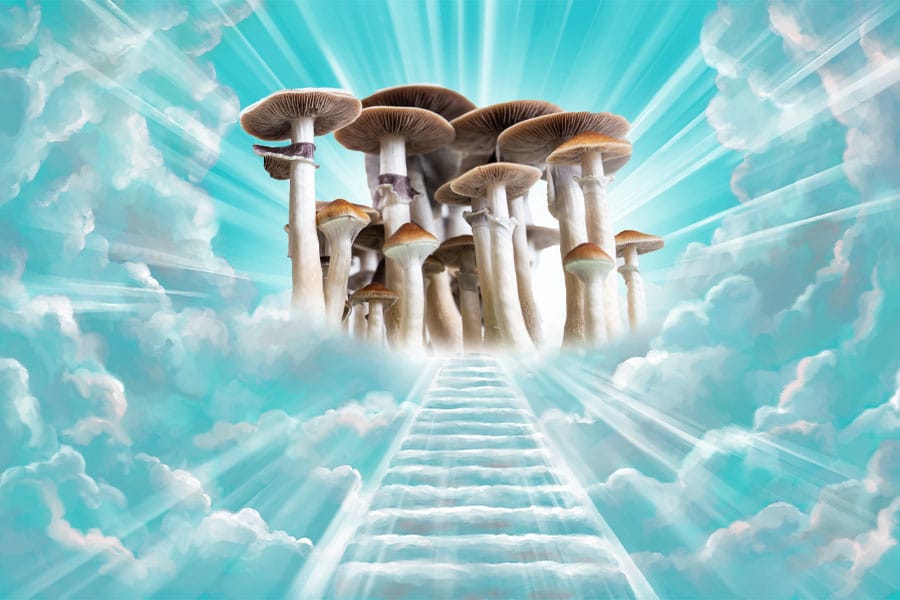 This Former Latter-day Saint Politician Started a Psilocybin Church—But Is it Legal?

The story behind Steve Urquhart, founder and "protector" of The Divine Assembly.

The Church of Jesus Christ of Latter-day Saints, formerly  known as the LDS or Mormon Church, makes its home and headquarters in Salt Lake City, Utah, at the heart of the Wasatch Mountains. With its complex of Church headquarters, conference centers, and flagship Salt Lake Temple and surrounding Temple Square, the Church literally and figuratively imposes over the topography of downtown Salt Lake City. However, many would argue that the Church dominates more than just the downtown area—exerting an oversized pull over politics at the state capitol, a mere fifteen minute walk from church headquarters.

Steve Urquhart is deeply familiar with both the state capitol and the internal life of a faithful member of the Church. As a Republican, he formerly served as a Utah State Representative in the deeply conservative southwest corner of the state. Today, he is neither a lawmaker nor Latter-day Saint. Instead, he is the founder and “protector” of The Divine Assembly, a Salt Lake City-based psilocybin church.

A practicing lawyer, Urquhart is a straight-and-narrow-path kind of guy: He served a mission for the Church to Brazil, married his wife Sara in a Church, and raised his four children in the faith. He never wandered far from that path until he and his wife had a life-altering experience with ayahuasca in Amsterdam.

“For the first big revelation, I saw this rapture scene, with my kids and wife,” Urquhart says of his initial psychedelic experience. “I thought, ‘Oh, God, I need to be more. I realized, I can be more. I can be good. I can enjoy them. The answer I got was, ‘Show your love. Do more dishes.’”

Members of the Church of Jesus Christ of Latter-day Saints are well-known for their teetotaling ways, adherence to the Word of Wisdom—which forbids the consumption of illicit substances like cannabis or shrooms—and other creeds that disallow premarital sex and emphasize modest clothing and language. Nonetheless, a former Latter-day Saint founding a psilocybin church is not as far out as it seems.

Read: Why Humans Believe in God

The Church claims mystic roots dating back to the Second Great Awakening. Founded in 1830 by a young Joseph Smith, the teaching of Smith’s First Vision in 1820 is part and parcel of the Church’s origin story. The story goes that Smith went to the woods in upstate New York to pray about which church to join, and was visited by two personages: God the Father and Jesus Christ, who counseled him to join no faith at all because there was no true religion on Earth.

Out of this vision sprang the Church that we know today, a Christian faith that separates itself from other sects by emphasizing the Godhead as three distinct individuals, granting the priesthood to all worthy males over 12 years old, practicing Celestial marriage and other temple ceremonies, and placing significance on personal revelation, “the way we know for ourselves the most important truths of our existence.”

The leading tenet of The Divine Assembly is that “each individual can directly commune with the Divine through the psilocybin sacrament,” though Urquhart hopes that sacred psilocybin use will draw people more into themselves, and away from any mainstream religion.

“I would think and hope, rather than pulling in what I learned from Mormonism, I hope that I am addressing the things that stunted my spiritual development,” said Urquhart. ”It’s top-down hierarchical dogma. Other humans telling a worshipper what to think and imposing all sorts of ridiculous requirements. I just have to believe that the amazing-infinite-wonderful-whatever-it-is-that-puts-the-universe-in-motion, which I call the Divine, just doesn’t give any shits about any of that stuff.”

Rather than a religious sect as typically envisioned, such as a building where worshippers gather for meetings and to partake of the sacrament, Urquhart sees the Divine Assembly as a revival-esque religious deconstruction, where members, in their own particular ways, lead in their own homes or at small, private gatherings, at least while the COVID-19 pandemic plays out. “It’s holographically formed. You can pull out any part and the rest remains intact,” he explains. “I founded it, but ideally, now I’m obsolete.”

Urquhart says he has done the work of establishing safety, best practices, and has completed the legal legwork with the state of Utah to be a corporate nonprofit church. “The government will have a problem with it, but it’s a very 2020 thing,” he added. “Why not remove the old white man from religion?”

Nonetheless, removing the “old white man from religion” is not as simple as starting a church, especially if that church’s membership plans to consume an entheogenic substance. The issue at hand is that believers—should they find themselves in court over their religious psilocybin consumption—need to demonstrate that their “sincerely held religious belief” as spelled out by the Religious Freedom Restoration Act (RFRA) is indeed religious, and not a philosophy or way of life.

The leading tenet of The Divine Assembly is that “each individual can directly commune with the Divine through the psilocybin sacrament,” though Urquhart hopes that sacred psilocybin use will draw people more into themselves.

Sean McAllister, a Denver-based attorney who specializes in cannabis and psychedelics, explains that even though RFRA puts the burden on the government in matters of  interference in religious practices, it also did not destroy the government’s ability to show it has a “compelling state interest” to quash the venture, especially if the religion engages in the consumption or distribution of a Schedule I substance, defined as having no medical use and high potential for abuse.

If any of the members or leadership of the Divine Assembly ends up in the courts, it is likely they will have to answer a dozen or more questions defining their religious beliefs as first laid out in United States vs. Meyers, a 1996 case which ruled against defendant David Meyers seeking religious protection for cannabis consumption.

McAllister says that the courts could ask a defendant any number of questions  to discern if the belief is, according to the government’s definition, actually religious.  “They could be asked, what is the theology, does your religion explain the purpose of life, does it teach you a moral or ethical set of codes around sexual ethics, around diet, around dress? The courts have looked at a lot of the details that dig deep into these religions.”

There are two precedents for religious psychedelic use in the U.S. One is the American Indian Religious Freedom Act of 1994, which states that “the use, possession, and transportation of peyote by Native Americans for bona fide traditional ceremonial purposes is lawful and could not be prohibited by states or the federal government.”

Read: What Is Mescaline? A Guide to this Cactus-Derived Psychedelic

The other is Gonzales v. O Centro Espirita Beneficente Uniao de Vegetal, a group that consumes hoasca (ayahuasca) as part of their religious observance. In this particular case, the government failed to show a compelling interest for prohibiting its consumption, and cited the Peyote exemption.

Psilocybin consumption enjoys no such precedent. In fact, the raid of Zide Door, Oakland’s Church of Entheogenic Plants, shows that sometimes the government, in this case, local police, may choose to go after plant-based churches, even if the plants are decriminalized by local law. According to Zide Door’s preacher, Dave Hodges, the church is preparing a lawsuit based on the RFRA against the Oakland Police Department, that will be filed later this month. Religious establishments that have won a lawsuit using the RFRA have been granted an RFRA-based exemption from the DEA.

Part of Urquhart’s inspiration for establishing The Divine Assembly was to protect from prosecution people like his wife, who integrated her psychedelic experiences with the help of her therapist, who also happened to be a Church Bishop (leader of a local congregation, similar to a priest or rabbi). “I see that a lot of people are nervous. So let’s get these people legally protected. They should be, “ Urquhart said.

A second  factor that seems to inform his confidence is his fluency in and interpretation of the laws as they currently exist.  “I’m saying, ‘My religious beliefs call for psilocybin sacrament.’ If someone says, ‘I don’t want to follow public accommodation laws because my sincerely held religious belief won’t let me accommodate gay marriage?’ No one asks the cake maker if these are their religiously held beliefs,” he explained. “Will prosecutors, police, and judges agree with me?”

McAllister is not so sure. “Just saying, ‘We use psilocybin to connect to God’ is not a holistic set of beliefs, and could easily have a hole poked in it.”

Whether or not law enforcement and prosecutors agree seems to be beside the point for Urquhart and a membership that has grown to 500 members in the past few months. COVID-19 has of course limited their ability to gather all at once. For the moment, Divine Assembly members can attend monthly worship ceremonies online. When COVID clears, they are searching for a dedicated space in Salt Lake City in which to worship, and planning an in-person gathering on the Bonneville Salt Flats for the summer solstice.

A series of experiments show the effects of acid on dolphins, cats, and other species.