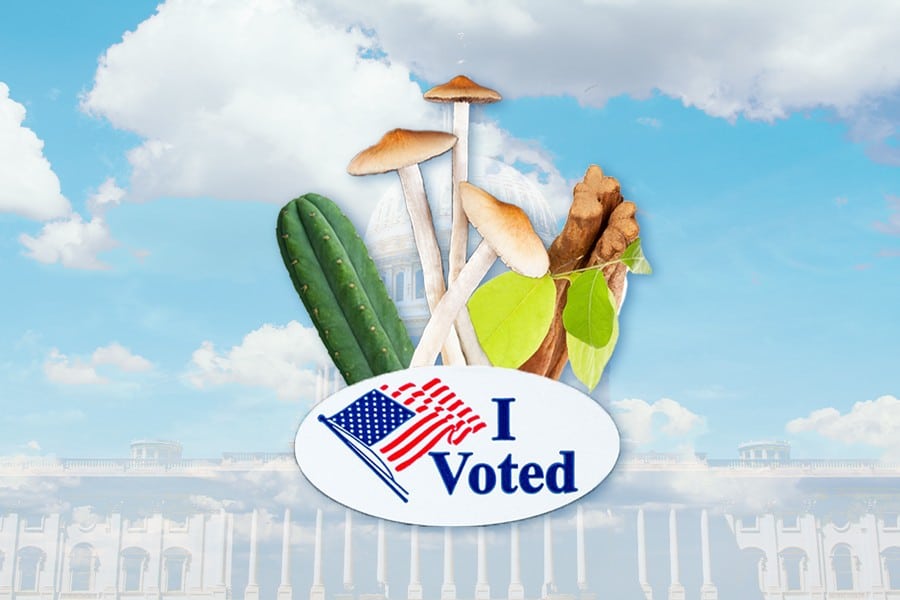 DoubleBlind Mag is devoted to fair, rigorous reporting by leading experts and journalists in the field of psychedelics. Read more about our editorial process and fact-checking here. Editorially reviewed by Madison Margolin.
Table of Contents
1 Pandemic Strategy Shift
2 What’s Next for Decriminalization?

Washington D.C. voters have turned out in support of Initiative 81, a ballot measure to decriminalize naturally-occurring entheogens like shrooms, ayahuasca, iboga, and mescaline-containing cacti. Soon, the nation’s capitol will join Ann Arbor, Oakland, and Santa Cruz in making these substances among the lowest priorities for law enforcement, clearing the way for DC residents to access plant medicine by growing and gifting; for-profit sales will remain prohibited.

“This win in DC is a very symbolic win. It’s right here in our nation’s capital,” Melissa Lavasani, founder of Decriminalize Nature DC and proposer of Initiative 81, tells DoubleBlind.

When Lavasani founded the Capitol’s chapter of Decriminalize Nature in late 2019 to put Initiative 81 on this year’s ballot, she envisioned a different kind of campaign. “I was expecting to be running around the city, going to people’s living rooms and speaking to their networks, to their friends and colleagues,” she says. But the COVID-19 pandemic stifled those traditional outreach efforts.

Instead, Lavasani and a cadre of volunteers petitioned DC City Council to allow electronic signatures while pivoting to a digital campaign alongside limited, socially-distanced canvassing. With $500,000 in financial support from Dr. Bronner’s Foundation, volunteers collected more than 36,000 signatures during the height of the pandemic shutdowns.

To further shore up the vote, Lavasani and her team built coalitions with DC-area social justice organizations and environmental groups, whose mission overlaps with Decriminalize Nature DC, she says. The DC Democratic party even endorsed the initiative—not a simple feat to pull off, says Lavasani—“they had lots of questions.”

When early voting started in D.C. on October 27, Decriminalize Nature sent volunteers to each of the city’s 32 polling centers to staff tables and educate voters on the ballot measure. In a city of just under 700,000, residents streamed into the early voting centers and voted by mail in record numbers for an election in which the stakes, for most Americans, are high.

For Lavasani, a DC city employee and mother of two, the push to decriminalize entheogens is motivated by her own experience healing postpartum depression with psilocybin and ayahuasca. In seeking the freedom to use plant medicine without fear of losing her family and livelihood, she discovered that other Washingtonians wanted the same freedoms to access entheogens for help with addiction, PTSD, anxiety, and depression.

The pandemic has opened the door to more candid discussions about mental health, says Lavasani, a fact that’s worked in favor of the campaign. “People are ready for change. And our mental health treatment options are not really that great—a lot of people are suffering right now.”

What’s Next for Decriminalization?

After the Board of Elections certifies the results and presents them to DC City Council, council members will submit them for review—as is coded in DC’s charter—by Congress and the president. Federal review, says Lavasani, probably won’t happen until the newly elected leaders take their seats in January—“but we don’t anticipate much pushback from the federal government on this,” she adds.

In the meantime, Lavasani and her team intend to keep building relationships with stakeholders like police, council members, and DC residents.

While some advocates of plant medicine might question whether Initiative 81 goes far enough, Lavasani believes that an incremental approach to drug law reform yields better results than an all-or-nothing one. “It’s such a small change that we were asking for, and I think that saved us,” says Lavasani.  “We just have to keep taking steps forward, no matter how small they are.”

Still, Lavasani believes that the passing of Initiative 81 in the nation’s capitol represents an important shift in the dialogue around plant medicine. “I fully intend to take this conversation to our legislators on a federal level,” she says. “Let’s get Congress to start talking about this. Let’s get states and cities to start passing reforms. It’s time to have these conversations and get real progress on these issues.”