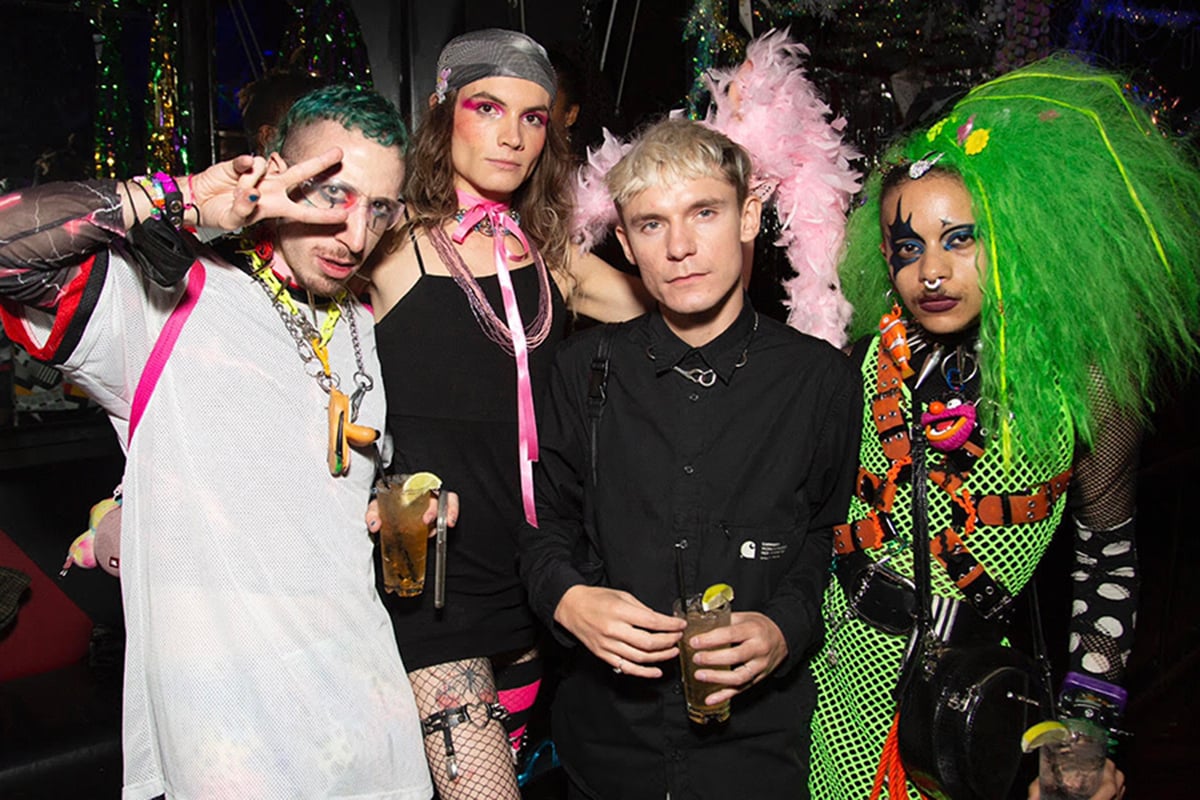 I sit on a rooftop in Bushwick, on a sweaty and buzzing Fourth of July afternoon. I chat with a few friends, all decked out in fly and glittering looks. Our party itinerary is long and filled with logistical concerns about who’s listed where and who’s working what door and the best times to arrive at each location. We pass a bag of mushrooms around as well as another with MDMA, our toothy smiles decorated with bits of earthy funk and our burps punctuated by chemical winces. We forget what we’ve done as soon as our cocktails have rinsed out our mouths and the conversation turns to sex and gossip, politics and the weather.

When it starts kicking in, my brain reels and I feel like I’m drowning in sensation. The cavalier attitude we had but 30 minutes before is mocking us. Our plans disintegrate and we take to the streets, passing through neighborhoods on foot—watching diasporas of people melt into one another as fireworks crack and shake above us in the sky. Human geography, architecture, urban nature, friendship, world histories…the very beauty and terror of the world sits matter-of-factly in front of us, almost dancing to the rhythms of crotch-rocket revs and 2 Chainz. Barbequed burnt flesh, gunpowder, beer, and sweat fill the air and we laugh at our own insignificance. This mode and strategy of drug consumption—casual, hedonistic, and spontaneous—I have begun to call “mindlessness.”

Mindlessness, as a concept, sits in opposition to the modern push in drug culture toward what is commonly referred to as “mindfulness” or “intentionality.” This trend is, in many ways, a means to avoid discomfort and the darker emotions associated with the psychedelic experience. It’s no secret that common barriers for people in psychedelic exploration are phobia and anxiety. This emotional response to the prospect of experimentation is, for most, a byproduct of hyperbolic cautionary tales in pop culture, governmental propaganda—dating back to the Reefer Madness era—and media accounts of the dreaded bad trip. These cultural beliefs, wrapped in the human fear of losing control, deter many a prospective partaker. As a form of anxiety mitigation, many trippers, both novice and seasoned, rely on set, setting, company, and ritual to assuage their paranoia—many times assigning inherent political, spiritual, or therapeutic benefits to this mode of consumption. Managing these factors allows humans to feel a greater sense of control within the experience. I’d argue that a more spontaneous strategy in the consumption of psychedelic drugs can aid in reducing anxiety and provide more fulfilling experiences without intrinsically increasing the risks of social or neurological consequences.

I’m no stranger to the underlying anxiety which often motivates a mindful approach to tripping. While I too am a victim of 7th Heaven and Fear and Loathing’s depictions of drug experiences, much of my personal fear surrounding psychedelics comes from my parents’ horror stories of being dosed with LSD in their youth. While out running errands with my mother, she would occasionally bump into her friend Billy, who was dosed with LSD in a bottle of wine when they were in high school. Punching his own face and reeking of piss, blood, and vomit, he’d yell angry conspiracies at her before moving on with his day. “That,” she’d say, “is why you never give someone a drug that they don’t know they’re getting!”

Peering up from my melting ice cream cone, my doughy 8-year-old eyes welling with horror, I’d watch him hurtle down the street like a rouge roller coaster cart. In spite of this anxiety, and perhaps because of it to some extent, my fascination with psychedelics began relatively young.

Read: The Dark Side of Festival Culture

The first time I tripped was 17 years ago, at age 13, by ingesting psilocybin mushrooms. My best friend and I raided my parents’ library, stealing some Harry Potter and other popular literature before heading to Half Price Books to sell them for shroom money. Feeling some apprehension, I planned our experience, set intentions, and engaged in spiritual rituals of my own devising before ingesting. Soon, after eating about a half-eighth of those nasty bastards, I was puking from anxiety and had a mild experience amounting to a microdose. While, of course I was young—arguably too young to be playing with drugs that powerful—this pattern of anxiety and let down continued for a decade without ever achieving ego death, strong visual hallucinations, or genuine personal revelations…that is, until I began taking psychedelics spontaneously.

A mindless approach to psychedelics not only transformed my relationship with the drugs themselves, but finally gave me the emotional, philosophical, and social benefits I had been craving in my earlier experiences. Casually dropping acid at a rave, a roommate finding a bag of mushrooms in a jacket pocket, some 2C-I chased with champagne at a club as an after-thought: These are the experiences that allowed me to see a previously unimaginable complexity in the world. It was cutting out the “seriousness” and the “intentionality” I had once viewed as mandatory that allowed me to stop letting anxiety tarnish my perception of events, as well as to stop ascribing pretentious and disingenuous meaning to psychedelic experiences.

Total drug decadence, with large doses and constant use, is not something to fuck around with. Our brains are fragile, both emotionally and neurologically. It would be a lie to say that I have not seen real psychological consequences manifest in people I have known within drug cultures and communities. That said, the general mode of consumption does not, anecdotally, appear to have much bearing on consequences. In fact, the worst results from psychedelic use that I have seen are in “mindful” users taking these substances with spiritual motivations.

Read: Consent is Psychedelic: Here’s Why

The belief that these drugs inherently foster spiritual growth can distract from their very real neurological consequences. Once while at a party, a young hippie friend of mine bragged to the group that he had gotten to the point where he was able to see others’ auras constantly, even without the aid of drugs. He described brilliant purples and greens swirling amongst us, showing our inner selves and essences. I was skeptical—and not just because he clocked me as a dull mustard yellow. His friends cheered in congratulations at his spiritual breakthrough, but in reality, as would become clear as he got older and increasingly lost cognitive function, his brain’s ability to process information was starting to deteriorate. His motivation was not solely responsible for this, but does illustrate that intention—spiritual enlightenment versus hedonism—doesn’t necessarily have an impact on quantifiable harm.

I am in no way advocating for a return to the acid-excess of my parents’ generation; viewing these drugs as consequence-free is inaccurate and giving someone a drug they do not know they are getting is a form of assault. To individuals for whom mindfulness works, I say, “good for you!” But, the persistent view that mindfulness is somehow more moral or truer than spontaneity deserves nothing but eye rolls.

Hiking abandoned subway tunnels to East New York and discovering the inner vascular network of the city like a demented episode of The Magic School Bus. The taste of joyful music pouring from the speakers at an after party. Spying a gargantuan carrier vessel snaking up the East River, as rare and majestic as a rhinoceros in the plains, and feeling the vastness of the universe as a physical sensation. Mindlessness fosters adventure and play, and by shifting toward an approach that validates both mindfulness and mindlessness, we can help facilitate more people in having profound and ecstatic experiences.

This article was originally published in DoubleBlind Issue 6.

We have a small favor to ask. Last year, more than five million readers like you visited DoubleBlind’s website. Many of them are suffering and simply seeking trusted information on how to use psychedelics to heal.

The Trippy Truth About Amanita muscaria, The World’s Most Famous Mushroom

From high to horror, the twisted tales of Amanita are as trippy as the mushroom itself.