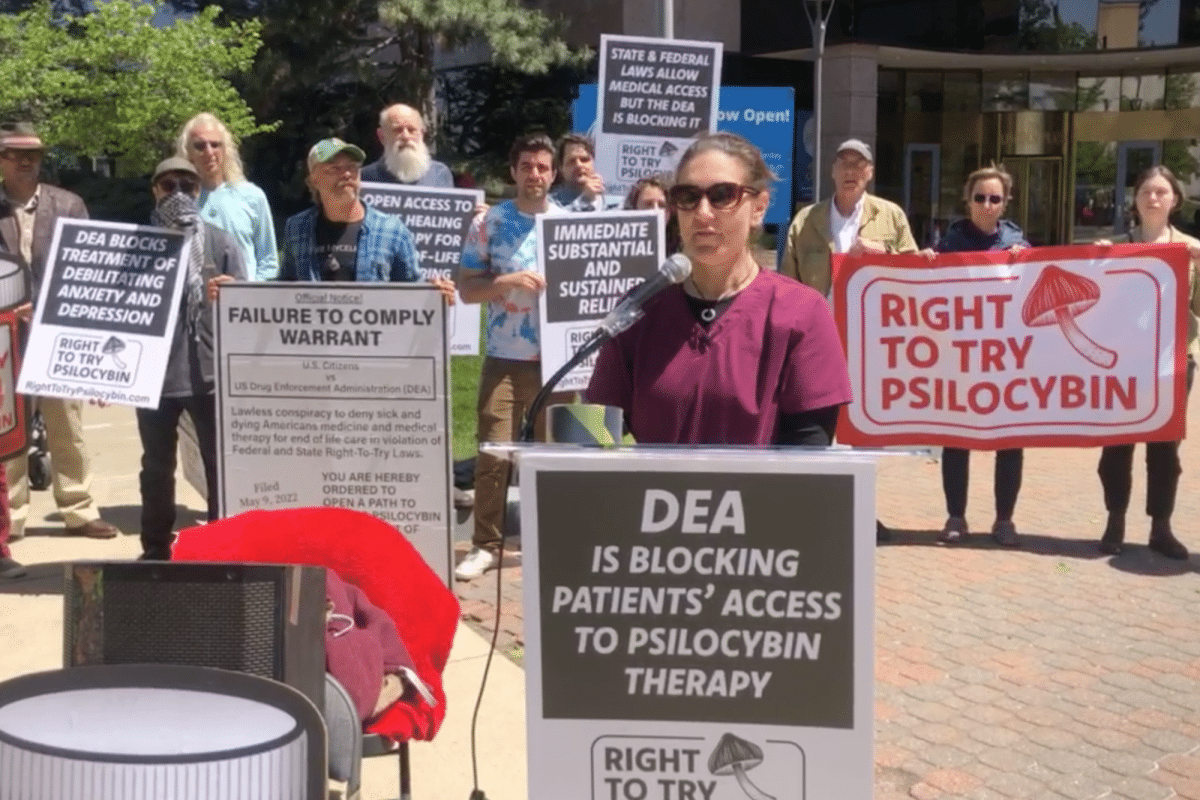 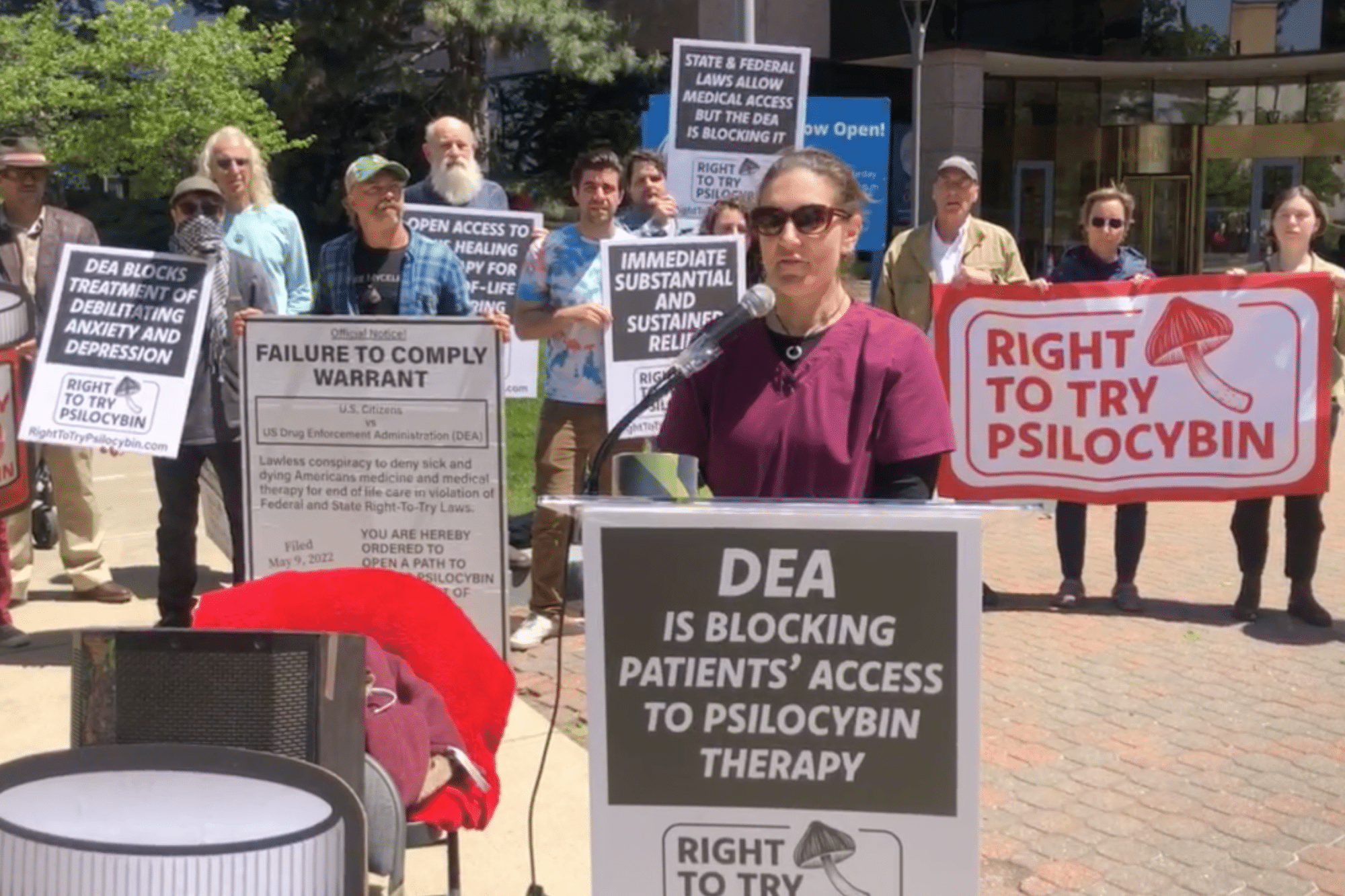 Activists staged a demonstration outside of the Drug Enforcement Administration (DEA) headquarters in Virginia on Monday, demanding that the agency allow terminally ill patients to access psilocybin therapy.

The event—which involved civil disobedience and arrests—was meant to call attention to DEA’s obstruction of Right to Try statutes at the federal and state level that patients and advocates say should facilitate legal use of psychedelics.

Patients, veterans and key advocates participated in the demonstration. One terminally ill patient, Erinn Baldeschwiler, is involved in ongoing litigation against DEA over its refusal to give her and others access to psilocybin.

At DEA headquarters, the activists set off colorful smoke bombs, plastered the building with violation notices, held a die-in outside one of the entrances, removed DEA’s flag and painted messages on windows.

After a couple hours, federal police showed up at the protest but did not immediately make any arrests. Rather, an officer spoke with activists and went inside the building to see if a DEA representative might be willing to discuss the issue with the participants.

While it seemed that officers had potentially reached a deal to allow Baldeschwiler to speak with DEA officials about the issue, she and 16 others were ultimately handcuffed and arrested.

“We’re here today to demand that the DEA open a pathway to access,” Kathryn Tucker, who is representing Baldeschwiler in the legal challenge, said at the start of the demonstration. “Not one more dying patient [should have to] endure debilitating anxiety and depression when relief could be had.”

“We’re not asking DEA to be compassionate,” Bronner said at the opening of the protest, before being detained hours later. “We’re asking them to follow established law.”

Tucker, the attorney in the ongoing litigation, said that “to absolutely prohibit access, when state and federal law are intended to allow access, that is impermissible.”

“These dying patients could have immediate, substantial, and sustained relief from debilitating anxiety and depression,” she said. “Why anyone would obstruct access to that kind of relief for a dying patient is impossible to comprehend.”

Advocates have pointed out that the Food and Drug Administration (FDA) has already granted psilocybin a “breakthrough therapy” designation.

In February, a Seattle doctor specializing in end-of-life care filed a formal petition with DEA challenging the government’s Schedule I classification of psilocybin, the main psychoactive component of psychedelic mushrooms.

The petition requests the agency to reschedule psilocybin as a less-restricted Schedule II drug, pointing to its relatively low potential for abuse and “exceptional promise in relieving debilitating symptoms in those with intractable and otherwise untreatable illness,” including the severe anxiety and depression that can result from a terminal illness.

Attorneys for Dr. Sunil Aggarwal filed the federal petition almost immediately following a decision by the U.S. Court of Appeals for the Ninth Circuit that dismissed on procedural grounds a lawsuit Aggarwal, Baldeschwiler and another terminally ill cancer patient filed against DEA last year. In that case, plaintiffs argued they should be allowed legal access to psilocybin under state and federal right-to-try laws, which are intended to let patients with terminal conditions try investigational medications that have not been approved for general use.

Separately, in January, a bipartisan group of members of Congress sent a letter urging DEA to let terminally ill patients have access to psilocybin. The agency, lawmakers said, is “obstructing access to psilocybin for therapeutic use consistent with the letter and intent Right to Try (RTT) laws.”

Congress and 41 states have adopted right-to-try laws, which allow patients with terminal conditions to try investigational medications that have not been approved for general use. Lawmakers said that DEA “has failed to abide” by the law.

DEA has increased production quotas for the production of certain psychedelics like psilocybin in an effort to promote research, but its scheduling decisions have continued to represent obstacles for scientists.

This article was originally published on Marijuana Moment. 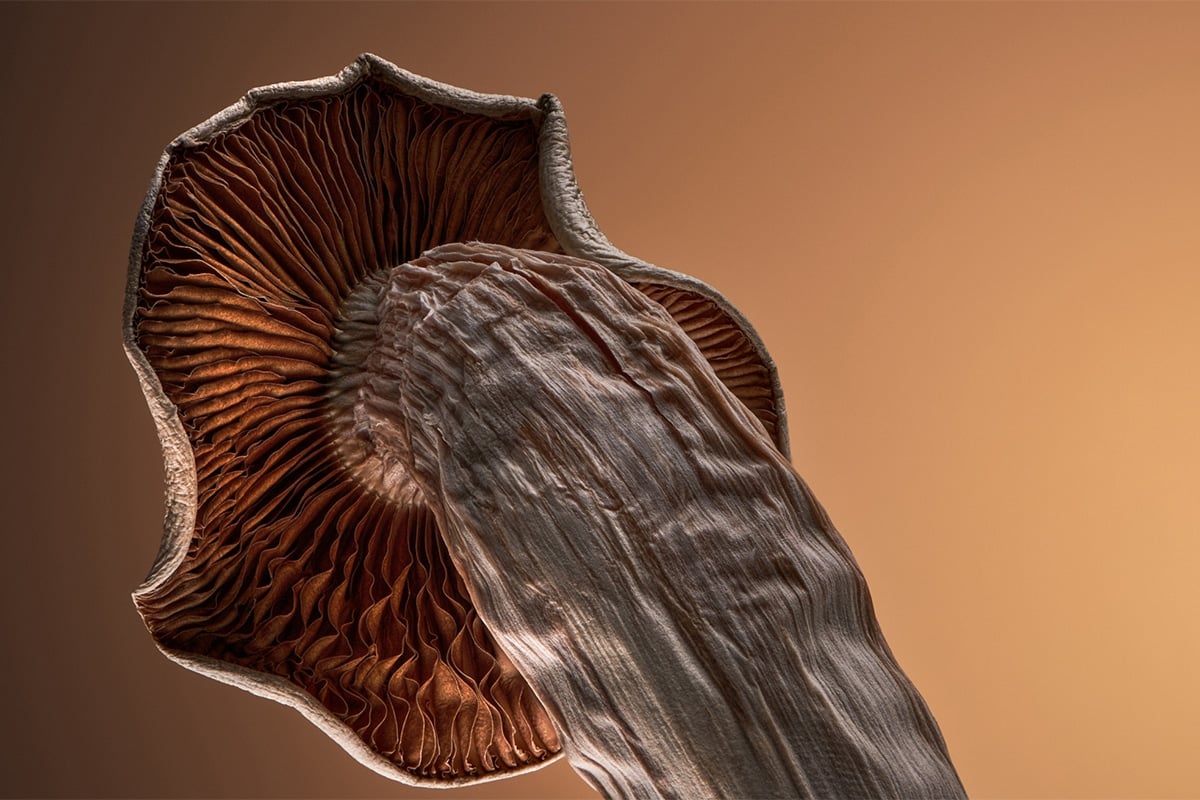 12 Best Things To Do on Shrooms

Tell your subconscious we said hello.