Compounds in these medicinal fungi may be natural "smart drugs."

Using mushrooms as medicine isn’t new, but the field of nootropics—along with the increasingly vast array of mushroom-enhanced supplements—is in a boom phase. Research suggests that “functional mushrooms” (those with benefits beyond their nutritive value) have anti-inflammatory, antioxidant, and anti-cancer properties and can potentially help with immunity, mood, sleep, digestion, fitness, skin issues, brain health, and more. Mushrooms are considered nootropic mushrooms when they show positive evidence of improving brain health and function.

What Are Nootropic Mushrooms?

The words “functional,” “adaptogen,” and “nootropic” are frequently thrown around in the wellness space. While the latter two both terms include a large swathe of compounds that may help you adapt to stress through different pathways, nootropics can be understood, says integrative pharmacist Dr. Swathi Varanasi, as “a type of adaptogen that pertains more to brain activity and brain health.”

The nootropics category—often dubbed “smart drugs”— includes both natural and synthetic compounds. They range from prescribed stimulants like Adderall and Ritalin to over-the-counter drugs like noopept and piracetam, to the amino acids, L-theanine and creatine, and herbs such as Rhodiola, ginkgo, and ginseng. Caffeine, shown to enhance cognition and decrease reaction time, is probably the most widely consumed nootropic worldwide.

Coined in 1972 by Romanian psychologist and chemist Corneliu Giurgea, the word “nootropic” originally described drugs that could positively impact learning and memory. Today, the word is frequently used to advertise brain-boosting supplements and other products—with controversy. Research on the efficacy of brain-enhancing supplements can be scant, and distinguishing marketing hype from genuine benefit, challenging.

Yet, while most nootropic conversations focus on consumables, Varanasi suggests that the category also includes activities and behaviors, such as mindfulness meditation, that “positively influence our brain activity and brain health.”

Read: Our Guide to Medicinal Mushrooms

Of over 2,000 edible mushroom species, only a small handful of non-psychedelic varieties are currently valued for their nootropic effects. (Psilocybin-containing mushrooms are also thought to have benefits for the brain.) But, it’s important to note that while these proposed nootropic mushrooms have been used medicinally for millennia, research on many nootropics—and particularly many natural nootropics—is emerging. At the time of writing, it’s impossible to pinpoint exactly what effects these mushrooms have on the human brain, although early experimental studies provide insight into their potential. Some substances may warrant the name “nootropic” more than others.

Among the five most commonly named edible nootropic mushrooms—lion’s mane, cordyceps, reishi, chaga, and maitake mushrooms—multiple mechanisms and pathways are likely responsible for their positive effects on the brain and nervous system. Emerging studies suggest that some nootropic mushrooms seem to work by boosting nerve growth factor—thereby stimulating the growth and repair of nerve cells. Others fight inflammation throughout the body, including in the brain, that may lead to degeneration. Some nootropic mushrooms may boost oxygen uptake in the body and brain, which, in turn, may promote optimal functioning. And others could help with mood stabilization, a known factor affecting brain health.

“Mushrooms work so well because they incorporate many bio-actives,” says Varanasi, referring to phytochemicals like polyphenols, polysaccharides, and triterpenes that are hypothesized to work synergistically to give functional mushrooms their therapeutic effects.

Lion’s Mane, characterized by its shaggy, pom-pom appearance, has numerous uses in traditional Chinese medicine as both a remedy and a tonic. Historically, Buddhist monks were said to drink lion’s mane tea (yambushitake or “mountain priest mushroom” in Japanese) to enhance their focus during meditation, and research backs up those perceived nootropic effects. A 2013 study from the University of Malaysia found that compounds known as hericenones and erinacines in lion’s mane stimulate nerve growth factor, an abundance of which is essential to repairing damaged neurons and boosting new neuron growth (aka neurogenesis). Healthy neurons, in turn, support cognition, memory, concentration, and balanced mood.

In 2009, a double-blind, placebo-controlled trial found lion’s mane significantly improved cognitive functioning in seniors with mild impairment. Interestingly, the nootropic benefits diminished after subjects discontinued their use of lion’s mane; though the study size was small, its authors found sufficient evidence for the mushroom’s efficacy for mild dementia. Well-known mycologist and entrepreneur Paul Stamets calls lion’s mane, after psilocybin, the “second smartest mushroom in the world.” He recommends lion’s mane as part of a psilocybin microdosing “stack,” described in more detail below.

Solid research on lion’s mane and centuries of anecdotal evidence all convene around the brain-boosting effects of the fungi (for nootropic benefits, says Dr. Varanasi, “lion’s mane is amazing!”)—making it no surprise that lion’s mane is the most sought-after mushroom nootropic today.

Cordyceps is primarily known as a fitness-boosting supplement that may improve athletes’ tolerance to high-intensity training, boost energy and metabolic rate, increase oxygen uptake, and aid in muscle recovery. Because the brain also requires oxygen to function, it’s thought that higher levels of oxygen circulating in the bloodstream can have beneficial effects on cognition and other brain processes as well.

Additionally, authors of a study published in 2018 found that cordyceps extract improved learning and memory in mice, likely because of its roles in protecting the nervous system and scavenging free radicals that damage healthy cells. Cordyceps may also contribute to brain health by providing neuroprotective benefits for the hippocampus (associated with learning and memory) in the case of age-related dementia.

Read: What Are Adaptogenic Mushrooms?

Chaga, which grows on the bark of birch trees in northern climates, is being studied for its potential as an immune-boosting, anti-inflammatory, tumor-inhibiting, and pain-relieving agent. Chaga has been shown to protect from oxidative stress in some medical conditions, which, says Varanasi, makes sense, given that many Inonotus spp. rank very high on the ORAC—a USDA-backed scale measuring antioxidant activity in fruits, vegetables, herbs, and other edible plants and fungi. Varanasi notes that chaga’s antioxidant benefit—superior to better-known free-radical scrubbers like açai and green tea—is related to chemicals known as anthocyanins which also give the mushroom its deep, black rings.

A 2011 study from Japan also found that chaga intake increased acetylcholine values in the brains of mice with amnesia and “significantly improved learning and memory” as measured by two different assessments. Chaga is also valued as an immune system modulator that can, somewhat paradoxically, help ramp up an underactive immune system or soothe an overactive one. While there’s a complex interrelationship between immunity, inflammation, and brain health, it’s possible that chaga’s immunomodulating effects could help reduce inflammation in the brain and protect that important organ from circulating immune cells.

Reishi (lingzhi, “plant of immortality” in the traditional Chinese pharmacopeia) is best known for its roles in supporting immunity, promoting stable blood sugar, fighting cancer, and—perhaps most importantly for brain health—lessening fatigue, anxiety, and depression. Indeed, one small human study suggests that regular reishi supplementation may help reduce fatigue for patients with neurasthenia, an old name for a condition that causes mental and emotional fatigue. Another found that the mushroom may ease cancer-related fatigue.

A 2017 animal model showed that reishi helped regenerate neurons and mitigate the cognitive decline of Alzheimer’s disease in mice. Like lion’s mane, laboratory research suggests that reishi may also promote nerve growth factor, which itself boosts learning, memory, and longevity.

Maitake mushrooms—often used to treat fatigue, allergies, high cholesterol, and high blood pressure—is less studied as a nootropic. Nonetheless, these common culinary mushrooms may boast some brain benefit. Early research in mice suggests that they may have antidepressant effects. Yet, thus far, this mushroom is studied far more for its impact on the immune and metabolic systems.

The Stamets’ stack—comprised of lion’s mane mushroom, niacin (vitamin B3), and a microdose of psilocybin—is a mushroom nootropic stack popularized by mycologist Paul Stamets. Stamets designed the microdosing protocol to theoretically boost brain function and improve mood. The stack was tested for the first time in a qualitative study published by Stamets and colleagues in 2022. Researchers analyzed data from 953 self-reported psilocybin microdosers and 180 non-microdosers who used the Microdose.me app. Of the microdosing participants, 264 “stacked” using lion’s mane, psilocybin, and niacin.

App data—from predominantly white, heterosexual men—suggests that microdosers had greater improvements in mood and cognition scores over non-microdosers after one month of microdosing. However, older adults who “stacked” appeared to have greater improvements in psychomotor and cognitive function than those who microdosed psilocybin alone. Although, the study authors point out that these preliminary results may be coincidental. More research is needed to suss out the benefits and risks of this potent mushroom nootropic stack.

“Some companies are incorporating nootropics into other things that you eat on the daily and drink on the daily,” says Dr. Varanasi. “My concern with this is that, when you look at the actual breakdown of what they put in each serving, it’s really quite low. So, unless you’re consuming a lot, you’re not getting much benefit.”

In the case of some supplements, she continues, you would need to take several capsules to get the “actual dose that’s been studied.”

Clean sourcing for mushrooms also matters. Because fungi absorb surrounding material in the soil or substrate, it’s important to read labels and websites, and to reach out to the company directly if you have questions on where and how the mushrooms were grown, whether the extract was made from fruiting body or mycelium (Varanasi prefers mushroom supplements made with fruiting bodies), as well as any questions you have on the extraction process or potency of the product.

To Go Deeper, Find a Health Professional Who Knows Nootropics

To optimize your nootropic mushroom experience, you may want to work with a knowledgeable practitioner who can help you hone in on your brain performance goals and refine a supplementation routine—especially if you’re also taking herbal supplements, psychedelic compounds, or prescribed medications. Mainstream healthcare providers don’t typically train in this area of research and practice, so Varanasi suggests finding a practitioner with a medical degree who’s done additional training in herbal and functional medicine. “Unfortunately,” she says, “that’s not the norm.” 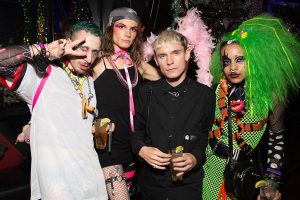 Ahead of federal approval, Connecticut seeks to lay the groundwork for psychedelic treatments in the state