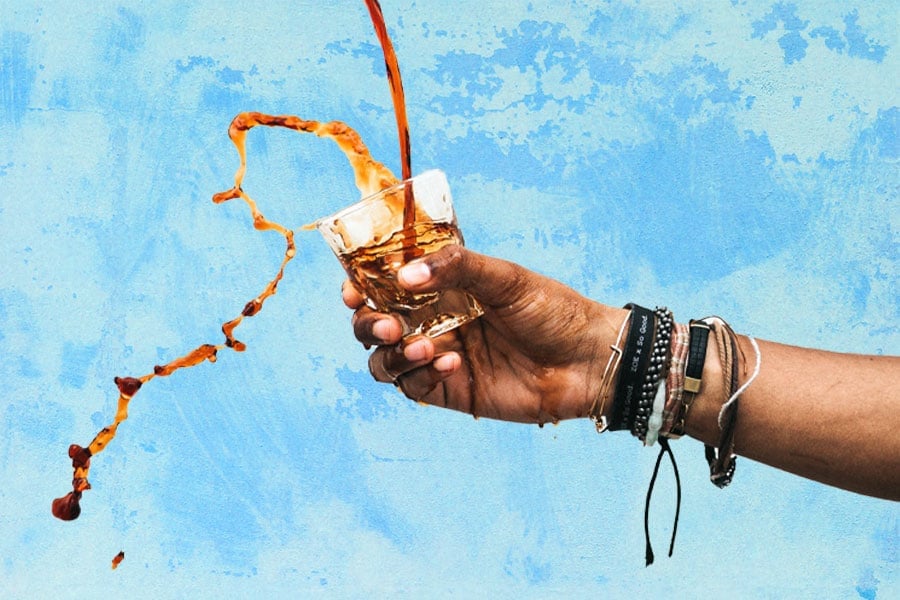 Microdosing Caffeine: What You Should Know

Psychedelics aren’t the only substances you can microdose—some people are choosing to microdose the world’s most popular drug.

DoubleBlind Mag is devoted to fair, rigorous reporting by leading experts and journalists in the field of psychedelics. Read more about our editorial process and fact-checking here. Editorially reviewed by Madison Margolin.
Table of Contents
1 Microdosing Caffeine
2 Caffeine Dosage
3 Benefits of Low Dose Caffeine
4 The Negative Effects of Caffeine
5 How to Microdose Caffeine

Microdosing is all the rage right now. As the name implies, microdosing is the practice of consuming very low doses of a substance over an extended period of time. The goal is to reap the benefits of a substance while mitigating the unwanted effects that can occur with ingesting larger doses.

In many ways, microdosing is reshaping the conversation surrounding drugs. Instead of focusing on the altered states of consciousness that they can produce, microdosing emphasizes consuming substances to enhance performance in day-to-day activities. Instead of taking center stage, the substance lives in the background, gently helping you achieve your goals.

Microdosing recently gained mainstream notoriety with substances like cannabis, psilocybin shrooms, and LSD; however, the idea of microdosing has started to expand into new, yet more familiar, territory. Here’s what I mean:

Caffeine is the most commonly used psychoactive substance in the world. It is so common, in fact, that many people are taken aback when it is referred to as a drug or psychoactive substance. Yet, every day, millions of people start their day with a cup of coffee—many of whom like to keep that cup filled until the day’s tasks are complete.

Unlike microdosing psychedelics, which are typically dosed intermittently every three or four days for a few months, caffeine is consumed daily by those looking to experience its benefits. Most people don’t give it too much thought, but caffeine is a powerful stimulant that helps people elevate their mood and battle through fatigue until they can get to a place they can rest.

In short, microdosing is an exercise in finding an optimal dosage. Yes, caffeine is going to interact with each individual uniquely, and individual experiences are a great guide for determining an ideal dosage; however, experience can’t help you in regard to where to begin. Thankfully, we can lean on science to help us find a safe place to start.

Unlike other psychoactive substances, caffeine is legal. It can be purchased at your local gas station and openly consumed while working. Indeed, one of the biggest perks of a lengthy legalization period is that it had a lot of time to be studied by the scientific community.

Cannabis, for example, is now legal in a variety of places; however, because of the laws that governed its prohibition, scientists were not allowed access to study the plant. The science community has needed to play catchup in order to give solid recommendations for personal use—especially with things like dosage.

Caffeine, on the other hand, has had the opportunity to be studied at length. The scientific community has a working knowledge of how caffeine interacts with the human body; they know general tolerance thresholds, and they know how long it can stay in the body. Understanding this information is the first step toward constructing a microdosing regimen. So, let’s take a moment to look at what science has to say about caffeine consumption.

Doctors recommend that a person should ingest no more than 400mgs of caffeine in a day; however, like we mentioned before, it is important to note that everyone is going to experience caffeine differently. In other words, some people are going to be more sensitive to caffeine than others and, therefore, need to use less to see optimum results.

It is also important to note that it is not recommended to consume 400mg of caffeine all at once. For most people, the ideal range of caffeine sits somewhere between 50mgs and 100mgs. This is equivalent to about a regular cup of coffee (100mg), a shot of espresso (85mg), and two cups of green tea (45mg each). People start to experience negative effects of caffeine at about 140mgs. These can include migraines, anxiety, insomnia, high blood pressure, and rapid heart rate. The trick is finding your sweet spot.

Microdosing is a great way to figure out your sensitivity to caffeine as well as make sure that you stay within your ideal range; however, before you decide on a dosage or consumption regimen, it is important to consider how long it takes for the effects of caffeine to kick in and how long those effects will last.

After orally ingesting caffeine, you will start to feel the effects between 15 and 120 minutes later (typically between 15 and 45 minutes). How long it takes is dependent on both your metabolism and what is already in your stomach. Caffeine has a half-life of about five hours, and the half-life, like the onset time, is unique to the individual.

By experimenting with small doses, you can gauge how long it takes for caffeine to take effect in your body, how sensitive you are to caffeine, and how long the effects of caffeine last. After you get a feel for how your body responds to caffeine you can begin to construct a microdosing regimen that will keep you in your own ideal range.

Caffeine is typically used to help people stay active and mentally sharp through their day. Not everyone has the luxury of getting a perfect night sleep, let alone having a schedule that allows them to have a regular sleep schedule. Caffeine is relied upon by many people to stay alert until they find time to get some sleep, but what is the best way to consume it?

People start to experience negative effects of caffeine at about 140mgs. These can include migraines, anxiety, insomnia, high blood pressure, and rapid heart rate. The trick is finding your sweet spot.

Everyone seems to have their own regimen when it comes to caffeine consumption. Some people think drinking a bucket of coffee throughout the day is the best strategy—the more the better! Others are convinced that if they drink a cup of coffee after 2:00 pm, they won’t be able to get to sleep at night. Everyone has their own experience, but here’s what science has to say on the matter.

In 2004, scientists at Harvard conducted a study that focused on the effects of microdosing caffeine. In this double-blind, placebo-controlled study, 16 male subjects were given small amounts of caffeine for 29 days. During this time, the subjects were deprived of time cues—experiencing extended periods of wakefulness and given tests that measured their cognitive abilities.

Especially if you are in a profession that requires extended periods of wakefulness—like a doctor or first responder—caffeine can definitely be helpful in making sure that your performance stays up to par when you are on the job. You just have to be mindful of how much and how often you consume, because there is such a thing as too much of a good thing.

The Negative Effects of Caffeine

Another benefit of microdosing is that you can avoid many of the more severe negative effects associated with caffeine. Too much caffeine can lead to things like insomnia and anxiety; however, by sticking to a strict microdosing regiment, you can actively avoid these negative effects. Caffeine withdrawal, on the other hand, is something completely different.

If you are a regular caffeine consumer, your body will start to let you know it wants more caffeine between 12 to 24 hours after your last dose of caffeine. If you do not grant your body its request, you may start to experience withdrawal symptoms—migraines, fatigue, irritability, and difficulty concentrating. It was found that the more caffeine that is consumed, the more severe and lengthy the withdrawal symptoms – some lasting as long as nine days.

Microdosing isn’t going to make it so you do not experience withdrawal symptoms if you decide to cut caffeine out of your diet. Slowly weaning off caffeine is the best course of action if you wish to stop consuming caffeine and minimize withdrawal effects; however, microdosing will ensure that the onramp and offramp to your caffeine consumption goes as smoothly as possible.

How to Microdose Caffeine

Microdosing ensures that the caffeine slowly builds up in your body and stays at the optimal level for an extended period of time. You won’t experience an anxiety inducing caffeine spike from guzzling an extra large vat of coffee, and you won’t experience the inevitable caffeine crash that comes a few hours later. Microdosing allows you to stay sharp until you can find time to get some rest.

For many people, the ideal range of caffeine sits somewhere between 50mgs and 100mgs. We know that doctors do not recommend exceeding 400mgs in a day, and we also know that the caffeine dosage that was administered to the subjects in the Harvard study was about 20mgs (roughly two ounces of coffee) of caffeine every hour. The trick is finding your perfect dosage.

Everyone is going to respond differently to caffeine; however, the Harvard study offers a great place to start. Based on your unique sensitivity and needs, you may find you need to take smaller doses or consume less frequently. Like any microdosing regimen, you want to make sure to start slow, take the time to feel how it is affecting your body, and always consult a doctor if you have any questions or concerns. Caffeine works for a lot of people, but that doesn’t mean it has to work for you. Good luck!