What Made María Sabina Unique

We know her as the woman who gave foreigners mushrooms, but that story is incomplete

There’s a classic black and white poster of María Sabina smoking, not a joint, but a cigarette. She holds it in a ceremonial way, in a secularly masculine way, between thumb and forefinger, eyes lowered in concentration. So many still think it’s a joint, not sacred tobacco. I’ve seen the image on t-shirts and in a bar in Palm Springs, a bar in Texas, and all over Oaxaca, Mexico, claiming space amidst other icons like Elvis, Marilyn Monroe, and Frank Sinatra. She’s an icon, and because of this she has travelled far.

I often wondered if María Sabina being singled out by R. Gordon Wasson and featured in his 1957 Life Magazine article “Seeking the Magic Mushroom” was the singular reason for her near saintly status in both Huautla de Jiménez and Western psychedelic culture. She was, afterall, just one of many practitioners in a very old tradition. What a strange lottery, and how American, to pluck a single practitioner from the many and portray her as though she was in possession of rare idiosyncratic genius. The fetishization of María Sabina as holy martyr is a problematic trope that infuses her with the spirit of Western individualism, while her role among the Mazatec people becomes a side note.

When I was 20, I read her life story and translations of her mushroom chants in a book titled María Sabina, edited by Jerome Rothenberg and Alvaro Estrada. María Sabina set the bar for me as to what language can do. They were the most beautiful “poems” I had ever read. Deceivingly simple, they are impossible to imitate. The mystery of their resonance has posed one of my life’s most serious inquiries. Shamanic language is always different from secular language, whether it be conversational or literary. Its power lies in this differentiation. María Sabina’s words, however, are both artifacts of a still existing shamanism and of literary greatness. Mexican poet Homero Aridjis called her “the greatest visionary poet in 20th-century Latin America.”

María Sabina was a “genius who emerged from the soil of the communal, religious-therapeutic folk poetry of a native Mexican campesino people,” said Henry Munn, one of the most eloquent scholars on the topic of the Mazatec culture in María Sabina: Selections. Sabina herself spoke of being a child and hearing the elders at night speak and sing in a way that was different from the daytime. The altars would be lit and the sounds would come, beautiful incantations that evoked other words and powerful feelings. She said the curanderas and curanderos all learned by sitting at the feet of the elders and observing, and when they were older and began practicing the ceremonies, each one brought their own signature to the practice.

Read: A Definitive History of Psilocybin and Magic Mushrooms

So what made María Sabina unique?

Munn also felt this was an important question. I mean, considering she’s been bestowed with the status of a saint, except when she was being vilified as a traitor to Mexican Nationalism, it seems important to know whether this happened because she was a curandera at a weird place at a weird time in the crossroads of Empire, or if it was something else, something truly extraordinary.

In his essay The Uniqueness of María Sabina, Munn said that what distinguished her from her contemporaries was just one particular thing: her musicality. She had a way of taking one word—madre for instance—and breaking it up into staccato beats, ma ma ma, mai. Mixed with her humming and percussive abilities, this sound has a powerful effect when heard on mushrooms, like her voice is literally getting inside your etheric body and doing things. It’s an extremely effective psychedelic tool.

In a book club discussion, one of the participants asked me why I thought she brought forth a previously unwitnessed musicality. “Necessity,” I answered. It felt true and any other answers I had were probably projections, like maybe she did things differently because she was suddenly in the crossroads, doing ceremony with white people for the first time in history, maybe she was adapting, evolving?

Before I let my imagination get away from me, I consulted Tom Lane, author of Sacred Mushroom Rituals: The Search for the Blood of Quetzalcoatl. He experienced a ceremony with María Sabina and has dedicated himself to correcting the volumes of misinformation floating around the ethers having to do with her. He said no, she never did anything different for Westerners. Her uniqueness was simply the result of talent.

“Let’s say Aretha Franklin/Robert Frost were one person and a singer and a poet and a Chjine Cjota or a woman from the ancient Tlamatinime transitioning from pre-Columbian to post-Columbian as a singer, earth dancer, poetess of the Earth,” Lane said. That was María Sabina. That was her talent.

Talent—the psychedelic virtue we rarely talk about because it’s also the new taboo. You can’t buy talent. It’s seen as either God-given or an accident of nature. Talent defies Mimesis, the building block of late-stage capitalism dependent on the proliferation and circulation of representations.

Whatever María Sabina had going on will never be taught in any school for psychedelic clinicians—because shamanism itself can’t be taught, save for the way it already is taught, and that ain’t in school. It doesn’t serve power to think some skills are simply innate and can’t be purchased. We actively work against the notion of talent, presenting a template that anyone can fit into so that no one is left out of the marketplace. We like to insist our practitioners have proper training, which is a good thing because most people lack talent so at least we can equip others with the basics, so no one gets hurt. The most talented among us often end up on the fringe of things. The best music is rarely on the main stage. Cornel West didn’t get tenure at Harvard. I can’t say the name of the most talented psychonaut and chemist I know because he operates fully underground.

If we had the conversations we should be having about shamanism and psychedelics, with the people who know what they are talking about, a lot of folks would lose interest due to the complexity. Personally, my class syllabus would consist of works by Black Quantum Futurism, Troy Conrad Therrien, Robin Wall Kimmerer, and East Forest. In a recent return to Aldous Huxley’s The Doors of Perception, I realized the essay anchors a Western psychedelic tradition born out of the inquiry of Modernism. The book about his mescaline trips is basically a critique of art in antiquity and a plea to look at things how they ought to be looked at—psychedelically. Huxley was primarily concerned with aesthetics. Like Immanuel Kant, he proposed that our conscious faculties of judgement are what enable us to experience beauty and the mystery behind it.

Aesthetics are how we know what’s going on.

Talent figures into all of this as something very mercurial and mysterious, and I’m not going to mess with it by trying to figure out what exactly talent is. I’ll just say we need more of it right now. Actually, no. Maybe there’s as much talent as there needs to be at any given time, we are just tasked with recognizing it

The poet Ariana Reines, of Invisible College, a literature and artistic mystery school of sorts, was speaking in a live feed about the NYC New Year’s Eve Ball Drop. She said it was a shameful crime against American citizens who are hurting, grieving, and suffering in a pandemic, because the whole thing was a phoned in charade as if we couldn’t feel it. It was cops and their girlfriends in weird boxes in the middle of the street. It was an insult. I saw it, too, and like all the optics in our televised public spaces these days, it was ugly. The musical performances were swallowed by a soda commercial crossed with nationalist propaganda aesthetic. I longed for Barbara Streisand or a child playing violin. Buskers in the city put on a better show. It was New Year’s Eve—what is the point in gathering around if not for talent? From the graphics on the evening news, to the crumbling infrastructure of airports to everything about that awful movie Promising Young Woman, we’re looking like shit, guys. The psychedelic knows Surface matters, that it tells the whole truth. Talent finds its home in the aesthetics of a situation.

The way we are seeing needs a makeover. In the Sixties, the psychedelic was bright cartoon colors melting, in the Nineties it was Mondo 2000, but the psychedelic is mercurial and never crystalizes. What’s going on is always changing. I don’t see the psychedelic in Meow Wolf’s fantastical installations, but I see it in the cinematography of the film Nomadland. I see it in Alia Shawkat’s acting and in Britney Spears’ kinetic sand video.

I have just made a thing that begins with María Sabina and ends with Britney Spears and what they have in common is that they are both icons that symbolically represent an uncanny thing that could be called talent. Tom Lane just wrote me to say, in regards to Sabina, “Besides talent, there needs to be an affinity and acceptance FROM the entheogenic plant/fungi.” It has to love you back. It has to choose you. Talent is a relationship.

I have no talent for the oracular. I would have been kicked out of Delphi, accused of drifting my way inside just for the good drugs. Saying what you see to be the future is too much responsibility. The skill lies in saying what is helpful. Each and every one of us knows what’s going on from our own position in the geometry.

I’m supposed to tell you that talent is important. We need to look for where it’s expressed and nurture it. Water it. Give it money. Give it a job. At the very least, don’t kick talent out of the room. Talent isn’t always convenient. Talent is triggering.

We are collectively miserable right now. We are grieving losses. Our souls are withering with hunger for beauty and truth that resonates deeply, most of us having been there at least once, in love, in nature, in ceremony. We know when we are being lied to. This is the time for us to stop pretending we don’t know what’s going on and bring forth our talents. No need to get workaholic about it: Talent is feminine, she exists in states of non-action, but she must be allowed to shine. 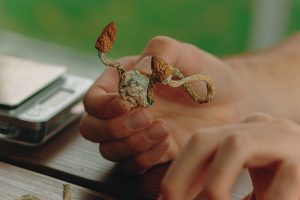 Where Are Magic Mushrooms Legal?

The legal status of psilocybin globally is in flux. Here's where you can journey without prosecution—sort of

Delight your eyes and tickle your brain with these trippy visuals