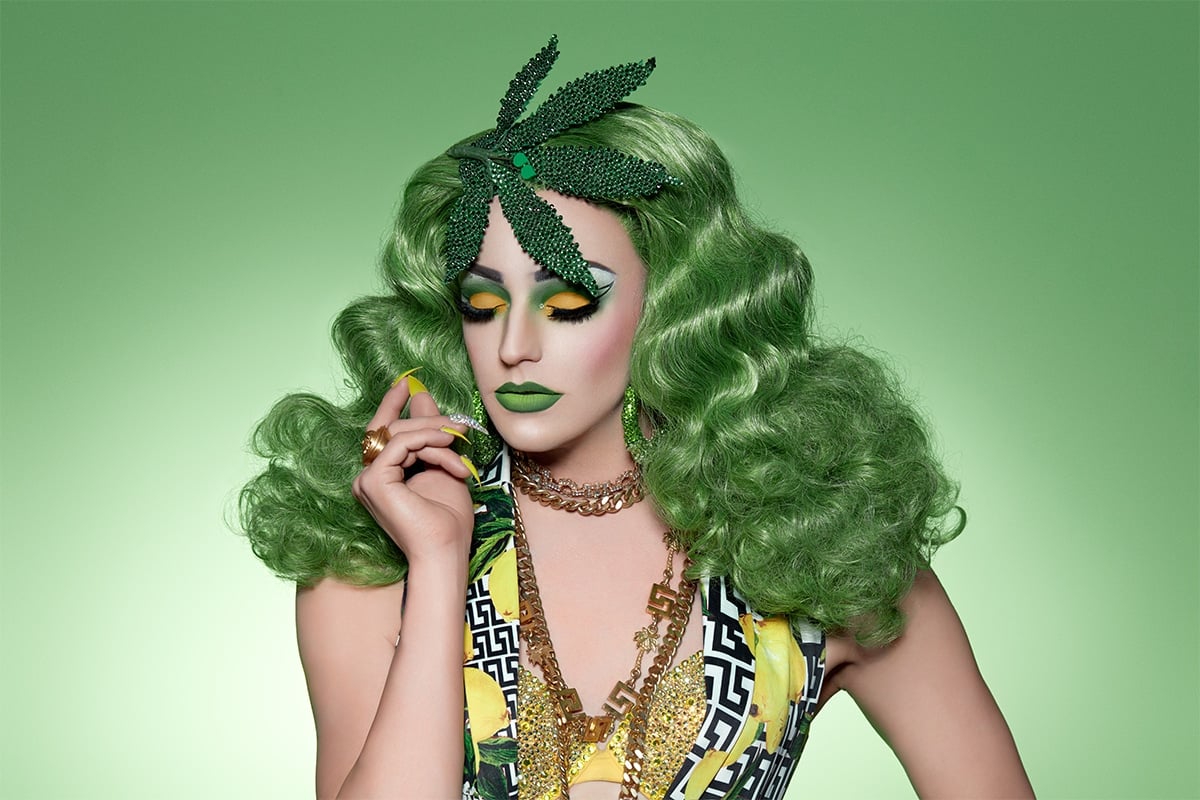 The international drag queen sensation doesn't trip much these days, but her work embodies what it means to be psychedelic.

There’s something undeniably psychedelic about drag. The colors, the transformation, the choreography, the fun, the queerness of it all…

And so, when I originally interviewed cannabis drag queen Laganja Estranja, I was surprised to learn that she, in fact, doesn’t have a strong relationship with psychedelics. She tried mushrooms in college, tripped in Amsterdam, and here and there might dabble in the psychonautic ethers, but “to be honest, psychedelics and I don’t mix that well together anymore,” she told me. “The older I’ve gotten, the less I want to feel out of control, which is why I love cannabis—because it’s my medicine. It helps me be a better me.” Initially thinking that the interview would survey storied tales about colorful trips that would culminate in the birth of Laganja’s drag identity, I probed a little more, asking if cannabis at least felt psychedelic to her (the answer was “no”), or if she’d had the somatic experience of psychedelics helping her feel more embodied, inspired to dance (also “no”).

I stalled, paused, and once I let go of the psychedelic angle and let the interview evolve free-form, I found that here we were talking about choreography, costumes, the courageous spirit needed to wake up every day and play the role of international drag sensation—all things, that I realized, are psychedelic in and of themselves. And so I ask, what is psychedelic, if not permission to explore your identity, defy limitations, and embody the essence of what it means to be a soul in a human body that moves—or dances—through this earthly plane? At the end of the interview, it all clicked: Being psychedelic has little to do with how much you actually take psychedelics, but how much you’ve actually integrated their ethos into life itself.

And that’s especially apparent in drag.

As Daniel Saynt, founder of the NYC members-only sex and cannabis club New Society for Wellness (NSFW), put it, “much of the experience of psychedelics is beyond just the visual, there is a mental opening that comes from exploring native plants and medicines.” When used ceremonially or intentionally, he continued, these mind-altering substances are “meant to guide people, show them a path, revealing who they may be.” The integration of the psychedelic experience is walking that path. And for some of those in drag, that path may just be the runway.

Read: The Inherent Queerness of Psychedelics

While there have always been more than two genders and ways to identify, he continued, this knowledge had been stigmatized for so long. “This rich culture of transformation has always been with us and mushrooms and other psychedelics have been tools for unlocking this knowledge for millennia,” said Saynt. “Drag is transformation. Exaggeration for the purpose of celebration. The femme and masculine spirits combined to create spectacle, entertainment, and solidify individual identities.” Drag, he said, is an opportunity to see our psychedelic visions come alive in real life. “The bright colors and shape-shifting elements of drag hold true to the original purpose of many of these tribal medicines and rituals. It’s a recreation of the visions that many have in the past and an acceptance of self in all its forms.”

All that is evident in Laganja Estranja, herself. At the age of 18, cannabis became Laganja’s gateway into the world of mind-altering experience—and shape-shifting identity. For a time, mushrooms were her psychedelic of choice. “I loved being out of control,” she says, but cannabis was ultimately what put her on the path to self-actualization—by helping her to focus, to regulate eating and sleeping cycles, and to feel grounded in a way that psychedelics never offered. Cannabis became a tool for the exact type of precision and diligence of health necessary for Jay Jackson to perpetually cultivate and perfect Laganja Estranja in all her beauty, choreography, and stage presence.

“With cannabis, my intention is to better myself every day,” said Laganja. “It helped me become a more regulated person. It helped me be not so depressed. It helped me take care of myself. I loved myself more because I felt better.”

Read: How Psychedelics Help with Gender Identity and Transition

But even if cannabis, rather than classic psychedelics such as shrooms and LSD, was central to Laganja’s development, psychedelics have nonetheless always been central to the queer community at large, she told me. “It’s common for anyone who suffers from PTSD to turn to medicinal drugs to help them heal themselves, so I think it’s always been prevalent, since trauma has always been in the community,” she said. “When I first started using cannabis, I don’t know if it was medicinal per se, but I knew it would make me creative and help me come up with choreography that I wasn’t brave enough to do before—so I think [for other people] it’s the same thing with mushrooms or any kind of psychedelic.”

“So do psychedelic culture and drag culture overlap?” I asked her. “100 percent. They absolutely go hand in hand,” Laganja affirmed, admitting that even her own work is indeed psychedelic. “While tripping isn’t necessarily for me at this time, at one point it was and I loved it—all the colors and vibrations that I got from those experiences. I think those stuck with me and informed my work.”

A self-described “old soul,” Laganja surmises that she’s been through many moons and cycles, and in this lifetime has the opportunity to align with so many different parts of herself. It’s not an un-psychedelic notion—to associate more with the soul, than ultimately with the body. “That’s why my work is the way it is, so over the top and expressive,” she said. “I do feel like it’s another worldly spirit that takes over when I start to dance. I try not to judge that spirit much. I’m the vessel, the channel for that.”

“I’m an artist, I’m inspired by everything,” she told me. “I’m inspired every day I wake up. From my dog, from the music I listen to, from floral arrangements, to the Netflix shows I watch. If you think you are alive and well, then you can pull inspiration from anything.”

If that’s not psychedelic, tell me what is. The MDMA Comedown: Why Coming Down From Molly Feels So Bad

The real cause of the "Blue Monday" crash—according to a psychiatrist.