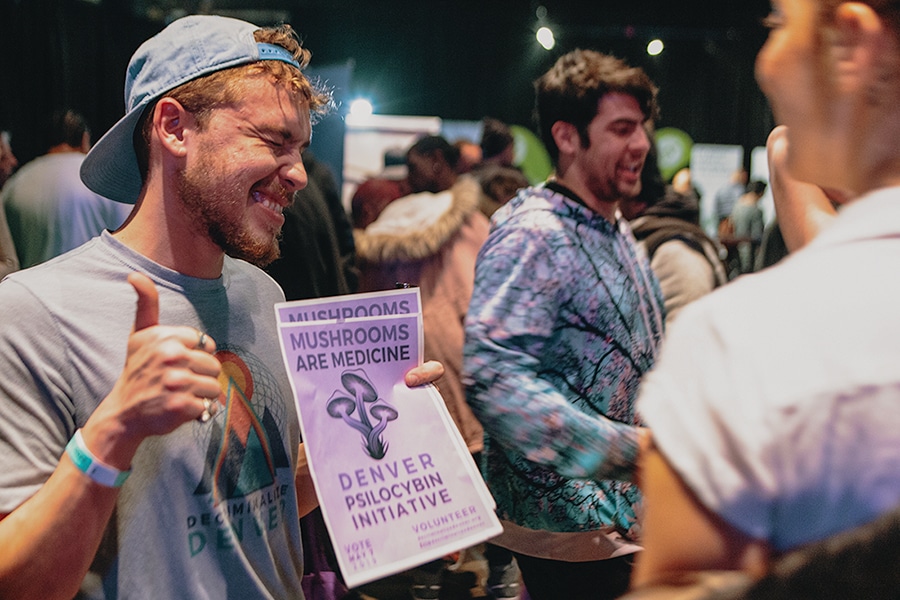 Decriminalization vs. Legalization: What’s the Difference?

Your guide to the differences between decriminalization vs. legalization when it comes to drugs.

When the word “legalization” is typed into a clickable headline, most of us who scroll our way past it assume that it has a simple meaning. On the surface and in plain English it means, quite simply, that something which was once prohibited by the law is now permitted. But if we’re talking about the legalization of federally banned substances like cannabis or psilocybin mushrooms, the meaning of that word becomes a whole lot more complicated.

When something like psilocybin is decriminalized at the state or local level, it remains federally illegal, while punishments for possession may be reduced to a fine or set as the lowest law enforcement priority. Legalization, on the other hand, is when a once-banned substance is no longer illegal, but may still have restrictions like age and possession limits, and in some cases may still require licensing for certain retail or production purposes, as with cannabis.

For anyone who wishes that legalization could just mean a system in which we are all free to use, produce, and possess a substance of choice, these muddled definitions can be frustrating. Unfortunately, there is currently no proposal in the United States that suggests psychedelics should be totally free of restrictions, but there are some that come close.

Cannabis & Psilocybin Help Illustrate The Difference Between Decriminalization and Legalization

Nationwide legalization or decriminalization of psychedelics is something that’s likely far off into the future. Cannabis activists are perhaps the closest to realizing their goal of legalization on a federal level, than say those looking to legalize shrooms outright, but even with some members of Congress like Rep. Alexandria Ocasio-Cortez and Sen. Cory Booker on board with the legalization of cannabis, passing legislation has proven to be difficult.

When it comes to psychedelics like MDMA and psilocybin, FDA trials that are currently underway might help to speed the process of legalization along, but even then, it will likely come with restrictions like the need for a prescription (in which case, “legalization” would like more like “rescheduling”). This is yet another way in which the difference between legalization and decriminalization operates on a case-by-case basis with specific rules attached. Currently, MDMA is being studied by the Multidisciplinary Association for Psychedelic Studies (MAPS) for its efficacy in treating PTSD, while both the nonprofit Usona and the for-profit company Compass Pathways are looking into psilocybin for depression. In any case, even as some states have legalized cannabis and some cities have decriminalized psilocybin, the DEA has continued to enforce federal bans.

In California, where cannabis for adult use was legalized in 2016 via Proposition 64, many activists rightfully complain that the regulations render the industry inaccessible to most, while the price of legal weed is prohibitively high. Heeding the cautionary tale of cannabis, activists are now aiming to decriminalize psilocybin throughout the state, with hopefully fewer regulations to follow if they succeed.

Until COVID made it impossible for the the Decriminalize California campaign to collect enough signatures to qualify for the November ballot, Californians would have had the opportunity to vote on an initiative to “legalize and regulate psilocybin mushrooms for medical and therapeutic use, and decriminalize them for personal, spiritual, religious, and dietary use.”

Read: Thanks to COVID-19, Magic Mushrooms Will Remain Illegal in California—For Now

While the campaign is now delayed until another election further in the future, the new regulations would have allowed Californians over 18 years of age to possess, cultivate and consume psilocybin mushrooms. It would also have allowed for licensed retailers to sell psilocybin mushrooms, while prohibiting unlicensed folks from doing so. Sharing mushrooms, however, would have been allowed.

Those under the age of 18 would be allowed to consume with the consent of a guardian while minors who are caught “cultivating, extracting, manufacturing, distributing, transporting, in possession of, or consuming psilocybin mushrooms” will attend a drug education program with no conviction on their record.

The state of Oregon is currently considering two initiatives which might make it on the ballot by this November.

The first is an initiative known as PSI 2020 that would exclusively provide psilocybin-assisted therapy. This limited form of legalization would allow for therapeutic psychedelic services overseen by the Oregon Health Authority for individuals 21 years or older without requiring a diagnosis of any particular condition for treatment.

It would establish something called the Oregon Psilocybin Services Program, in order to train therapists to treat patients with a variety of mental ailments from depression to PTSD with the help of psilocybin. If voters approve it, the program would require a two-year development period before it goes into effect (presumably to prepare and train those who will be licensed to administer it). Sales and commercialization, as well as home cultivation, possession or personal use would not be allowed under this initiative.

Oregon’s second initiative is a decriminalization initiative known as Proposal 44 or the Drug Addiction Treatment and Recovery Act (DATRA). This initiative attempts to reduce prison sentences and punishments that come with the possession of all substances in schedules I through IV of the Controlled Substances Act—everything from psilocybin and ayahuasca to heroin and LSD. It would reduce punishment for possession to a fine of $100 and would have the Oregon Health Authority establish addiction treatment centers using tax money collected from cannabis sales. Possession in this case is defined by whatever the current law allows for each substance. For example, for psilocybin that limit is 12 grams.

In New York, Assemblywoman Linda Rosenthal introduced a bill to the health committee that would decriminalize psilocybin. Little is known about what the outcome of the bill would be if it were to pass through the state legislature, however the legislation is still new, having been brought to committee this past April.

In Iowa, Jeff Shipley, a Republican member of the state’s House of Representatives, introduced a series of bills to reform the law around psychedelics. One of the bills would allow Iowa’s To that end, he introduced a series of drug bills in the Iowa legislature earlier this year. One of them would allow the Iowa state pharmacy board to reclassify psilocybin, ibogaine, and MDMA for medicinal purposes. The measure would also remove the criminal penalties associated with the drugs when they are used for medicinal purposes. If passed, another bill would remove psilocybin and psilocin from the list of substances thought to have no currently accepted medical use.

In Vermont, Representative Brian Cina introduced a measure earlier this year to psilocybin, ayahuasca, peyote, and kratom. The bill states that these four substances in particular are “commonly used for medicinal, spiritual, religious, or entheogenic purposes.”

Local Initiatives: The Choice to Decriminalize vs. Legalize

In the Spring of 2019, the county of Denver became the first in the country to decriminalize psilocybin mushrooms. The initiative did not make mushrooms legal in Denver, but it did set possession and cultivation of psilocybin as the lowest law enforcement priority. Sales of psilocybin remain illegal as well as possession for minors. The intuitive also set up an advisory board which is currently looking into setting rules for possession limits and providing educational resources to ensure safe consumption of psilocybin.

Shortly after Denver decriminalized psilocybin, the city council of Oakland, California voted to decriminalize all entheogenic plants and fungi (naturally occurring psychedelics). Like Denver, they have set the enforcement of federal or state bans on these plants and fungi as the lowest law enforcement priority, meaning that they are still illegal, but that police are unlikely to commit resources to arrests. Following Oakland, the city council of Santa Cruz passed the same measure which has been proposed in nearly 100 cities across the country.

The Society for Psychedelic Outreach Reform and Education (SPORE) is a non-profit organization that advocates for the legislative reform around psychedelics across the country. It was born out of the successful decriminalization campaign in Denver and has been referred to as the first “psychedelics lobby” in America. For the time being, SPORE is focused on public education about psychedelics as well as advising local communities like Denver on how to implement decriminalization once it’s been passed.

Should You Take Psychedelics While You’re Sick with COVID?

Some people are using psychedelics for their potential anti-inflammatory properties, while others are aiming to mitigate the physical and emotional symptoms once or if they contract the virus.

We asked filmmaker Donick Cary what it was like working on "Have a Good Trip" for over the past decade.