Donald Trump’s Distant Relative is Starting the “Amazon of LSD”

He claims it’s legal, but will it last?

The Torstrasse storefront is a continuation of work that began in September of 2020, a time when many were caught in the grips of pandemic fatigue. Trump, VICE reports, felt that demand for psychedelics grew as more Berliners were stuck at home in an isolated world. So, he started selling LSD online and via the messaging app, Telegram.

Earlier experiences with the drug inspired Trump’s mission. “LSD allowed me to put everything in perspective,” he told reporter Jessica Bateman, recounting past trauma. “And I thought, ‘This is something I want to share.’ I wanted somewhere you could meet other people and talk about this extraordinary experience.”

Love and connection, however, are not the only motivations behind the LSD Store. Trump’s website boasts that he intends to build the “Amazon of LSD,” saying “the plan is to spread love by making LSD derivatives a mass product like coffee.” (It turns out a proclivity for mega-business may run in the Trump family.)

Yet, regardless of the odd circumstances and grandiose dreams at the backbone of the shop, one lingering question remains: how is Trump able to openly sling LSD? And, perhaps more astoundingly, sell the psychedelic in an actual storefront?

Here’s the catch一Trump isn’t selling LSD per se. He’s selling 1CP-LSD, an unregulated analog of the classic psychedelic. An analog is a chemical compound that has a similar structure to another but isn’t quite the same. Yet, legally speaking? 1CP-LSD is a different ball game, or so a paper drafted for Trump by a lawyer argues.

“After seeing others selling it, I went to a lawyer and got a document written up stating it was legal,” he says.

Trump’s audacity draws attention to a larger phenomenon: the rise in popularity of research chemicals as novel psychoactive drugs一and the challenged attempts of policymakers to control the substances.

Designer drugs like 1CP-LSD are not exactly new. In 2013, the United Nations reported that popular demand for conventional drugs leveled off as novel synthetics became more accessible and familiar. The trend continues today. In 2020, the UN published a leaflet stating that at least 120 countries have reported finding one or more new psychoactive compounds in circulation. As a result, 60 different governments developed policies to control their circulation. The same year, the World Health Organization announced that 11 new psychoactive substances were to be recommended for international control.

In the United States, 1CP-LSD likely would be considered illegal. Legislators passed the Federal Analogue Act in 1986, an effort to blanket ban all compounds that are “substantially similar” to drugs classified as controlled substances, including LSD. But, even here, enterprising creatives attempt to make the case for a loophole of their own. The Federal Analogue Act bans analogs that are intended for human consumption. This loophole is exploited by makers of synthetic cannabinoids, for example, which are often marketed as potpourri or aromatic spice.

Policymakers around the world struggle to keep up with the new waves of research chemicals that continue to appear on the market. Thus far,  restricted access and prohibition are the primary tactics legislators use to control the spread of novel一and largely unstudied一designer drugs. Yet, despite these whack-a-mole efforts, a handful of new synthetics seem to appear with every piece of legislation that tries to control their proliferation.

Some of these unstudied molecules may come with deleterious consequences, although their overall health effects are largely unknown. Anne Zwartsen’s research offers an example. Zwartsen, a Ph.D. candidate at Utrecht University in the Netherlands, put some of these drugs to the test in experiments on neuronal and heart cells. Her research found that some of the substances had lingering effects on brain cells the day after exposure, yet the health implications of this finding are unclear. She also discovered that some of these drugs may elevate body temperature to as high as 106°F (41°C), making consumers susceptible to potentially fatal heatstroke.

Findings like Zwartsen’s may cause concern among public health officials, but thus far, prohibitory policies have done little to quell the spread of new psychoactive substances. Utrecht University reports that as many as 900 new synthetic drugs entered circulation in the past 15 years.

Unfortunately for Trump, Germany may soon join the U.S. in banning analogs. VICE reports that German legislators will likely ban 1CP-LSD as early as this week. Although, no reports on the ban were found at the time of writing. If a ban succeeds, however, Trump says he may move his business elsewhere, like Poland or Russia, countries which do not have specific legislation banning LSD analogs.

“Poland is a very conservative country, so the idea is to try and politicize the people through LSD, so they become more critical of institutions such as the church,” he told Bateman. 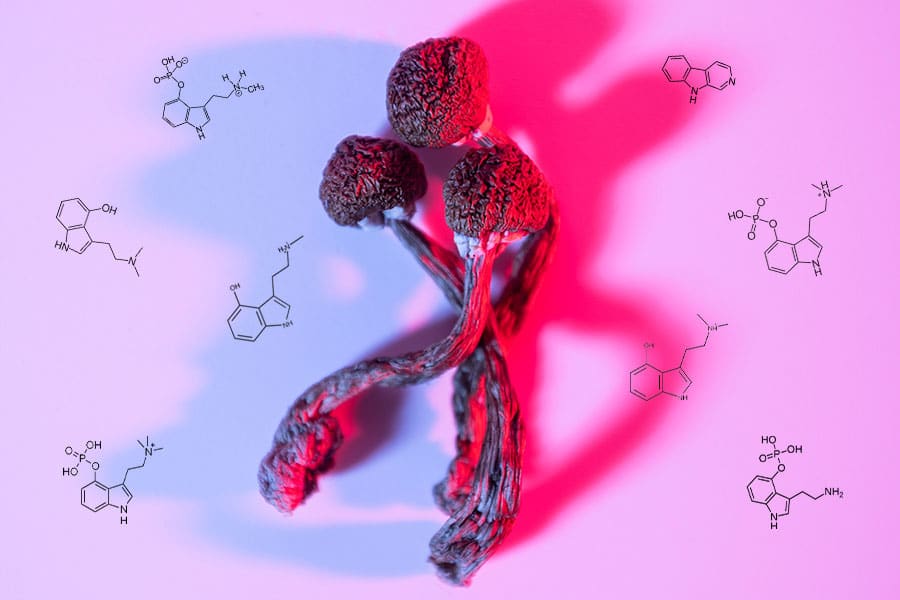 A survey of the alkaloids in psychedelic mushrooms Wavy Caps may grow by the hundreds on a pile of wood chips—but are they really as potent as they’re made out to be? A mycologist dives into the history and science of Psilocybe cyanescens.