Can You Develop A Tolerance to Shrooms?

Tolerance to shrooms develops faster than you think—you might be disappointed if you trip too often.

Whether you’re curious about trying shrooms for the first time or you’re an experienced psychonaut, you may be wondering about how building a tolerance to shrooms will affect your trip. Here’s something funny about this famous fungus: if you trip on Saturday, you’ll be disappointed if you try again on Sunday. Your brain won’t have it. Here’s why.

What is Psilocybin Tolerance?

Psilocybin tolerance is about how strongly you respond to the effects of shrooms. The term “tolerance” in health and medicine refers to the diminished response your body has to a substance—like psilocybin—when you consume it repeatedly. Over time, the human body can become desensitized to the experiential effects of certain drugs if you take them over and over again. When you build up a tolerance to a substance, you need more and more of it to experience the same effects as you did the first time you partook.

You may be most familiar with alcohol or opioid tolerance, as drinkers and people who use opioids need to increase their dosage as time goes on to achieve the same level of intoxication. Psilocybin tolerance is different. Unlike substances like alcohol and opioids, psilocybin is thought to have a low potential for abuse and is unlikely to cause compulsive use.

“One reason is that the intense experience, which can be physically and mentally challenging, may cause people using psilocybin to limit their frequency of use,” writes Drug Policy Alliance in their factsheet on psilocybin mushrooms. Drug Policy Alliance is a non-profit organization that advocates for drug policy reform and harm reduction. “Another reason is that the human body quickly builds tolerance to psilocybin, such that people require much higher doses after only a few days of repeated use, making it extremely difficult to have any effect after more than four days of repeated usage.”

Overall, however, the subject of psilocybin tolerance is not well studied—there’s still much we need to learn about psilocin’s effect on the brain. (Psilocin is the psilocybin metabolite that produces psychedelic effects.) Still, as Drug Policy Alliance suggests, building a long-term tolerance to shrooms is unlikely given the fungi’s powerful experiential effects. Instead, shroom tolerance is more of a question of how long it’s been since your last trip, according to psilocybin experts.

“If you finish a mushroom trip and you try to take mushrooms again, it won’t work,” Michelle Janikian, editor of Psychedelics Today and author of the book Your Psilocybin Mushroom Companion. “You can develop a short-term tolerance.”

Read: How Long Does it Take for Shrooms to Kick In?

How Does Tolerance to Shrooms Work?

If you were hoping to spend several consecutive days exploring psilocybin, you might not have the kind of success you’re looking for—even if you increase your dose each time. The short-term shroom tolerance that develops when you try to do a repeat on your trip too soon after your last trip is known as tachyphylaxis.

Studies into the question of tolerance and psilocybin are limited, but studies of LSD can be informative when it comes to psilocybin. It’s well understood in the scientific literature that shrooms and LSD affect the same receptors in your brain, 5-HT2A receptors. These receptors are also known as “serotonin receptors” because they respond to the neurotransmitter serotonin. Studies of LSD show that these receptors only respond to the drug up to a certain point, at which point they rapidly deregulate or stop reacting in the same way.

In other words, if your brain is exposed to an initial dose of psilocin (the chemical in psilocybin mushrooms that crosses the blood-brain barrier), tachyphylaxis kicks in, and your brain won’t undertake any additional response to the chemical compound for a little while. Although, researchers are not certain about the mechanisms of action behind the phenomenon. Tolerance also occurs if you try to trip on LSD right after a mushroom trip. From early studies of psychedelics, we know that cross-tolerance happens between LSD and psilocybin and mescaline and psilocybin—all drugs that also interact with serotonin receptors.

For that reason, Janikian says that at retreats she has attended where participants take mushrooms, it’s normal for there to be at least a 24-hour break between trips—sometimes longer. Outside of retreats, Janikian says she tends to take breaks of several months between trips. These pauses may allow your receptors to accept psilocin again. It also allows you to recalibrate after an experience that can be emotionally, intellectually, or spiritually intense for many people.

Shroom Tolerance and How Long Psilocybin Stays In Your System

The effects of shrooms typically last between four and six hours, depending on the size and potency of the dose you’ve taken. The effects of magic mushrooms often become noticeable within 30-40 minutes after ingestion, with peak effects occurring two to three hours later. After the peak of the psychedelic experience, the trip slowly winds to an end.

Psilocybin then gets filtered out of your body over about 24 hours. The body metabolizes and excretes psilocybin relatively quickly (thank you, kidneys) compared to the substances in other drugs, like cannabis. In contrast, about two-thirds of ingested psilocybin leaves your body within the first three hours after consumption—shrooms don’t stay in your system that long.

Still, it’s normal to feel a little unusual for a few hours or even days after your trip. So even if psilocybin has been fully metabolized and excreted from your system, and your tolerance for shrooms is back to normal in your brain, that doesn’t necessarily mean you’re ready for your next trip.

“Because mushrooms are so intense, you’re still kind of in this after-glow space,” Janikian says of the immediate days after a mushroom trip, “and I just don’t think you’d go as deep if you went in the next day.”

Microdosing and Long-term Tolerance to Shrooms

It may be possible for people who microdose—take a small dose a few times a week, usually according to a specific regimen—to develop a slight tolerance to psilocybin, resulting in the need to increase the dosage slightly over time. But research into this topic is limited, too. In one small study in Norway of men who microdosed psychedelics, some reported tolerance to the effects of shrooms, while others didn’t.

Without a wealth of reliable studies on the question of tolerance (and many other topics in the field of psychedelics that are still under investigation), it can be hard to say anything conclusively about microdosing psilocybin and tolerance. It may be worth considering what anecdotal evidence has to say. Some researchers have turned to online forums, blogs, and other sources of user-generated data for clues. For instance, in a review of microdosing testimonials on YouTube, researchers noted that some users recommended taking breaks from microdosing to avoid tolerance buildup.

A tolerance break is what it sounds like—when you stop taking a substance to reset your tolerance level. Tolerance breaks may be particularly important for those who microdose mushrooms, given that there is currently little information available about the long-term health effects of microdosing.

“It’s important for folks to be aware that if you find you’re upping your dose, it may be time for a break,” Janikian advises. Luckily, psilocybin mushrooms are not known to cause physical dependence, so taking a break shouldn’t make you feel sick or require any cutting back regimen.

In one interview with James Fadiman, creator of a popular microdosing psilocybin regimen and a preeminent researcher on the subject, he explained that after a month of microdosing, many people simply stop. Or, they decide to microdose only now and then. In Fadiman’s words: “What began to happen is by 30 days, their system had reorganized enough,” a statement he made in a 2020 video interview with the Microdosing Institute. Additionally, taking a break could save you money if upping your dose takes a toll on your budget. It may also be what you’re inclined to do, anyway. 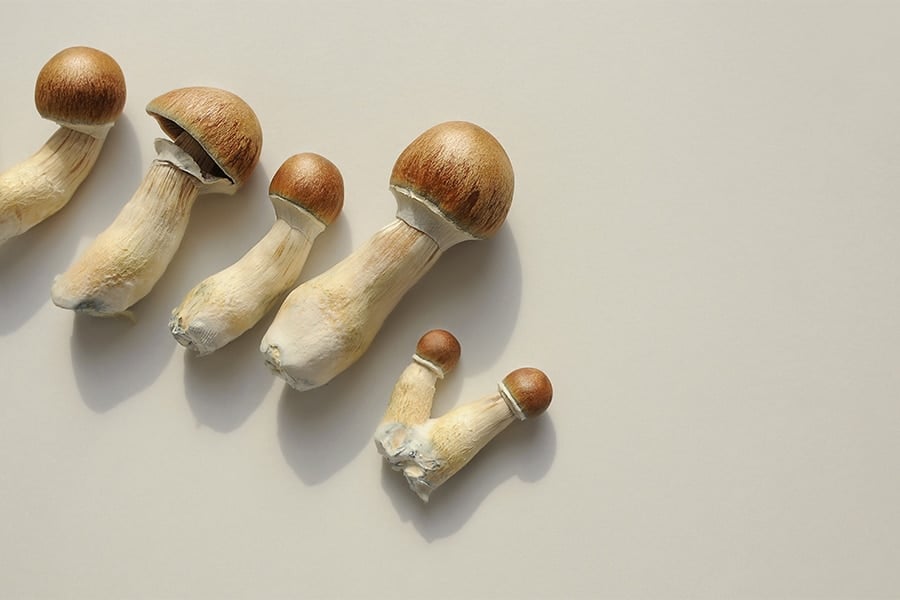 Shroom Delivery is Now a Thing

With psychedelics decriminalized, many entrepreneurs are taking advantage of grey market loopholes.