Researchers explore the potential of psychedelic therapies for people in minimally conscious states.

Psychedelic medicines have shown great promise in treating mental health conditions and helping patients see life from a new perspective, but their benefits may go even further in repairing injuries to the brain and, therefore, consciousness itself.

In June of 2018, neuroscientists Gregory Scott and Robin Carhart-Harris headed to the Royal Hospital for Neuro-disability in London to deliver an unprecedented proposal to roughly 50 clinicians and therapists, whose patients were in “vegetative” or minimally conscious states—conditions known as disorders of consciousness (DoC). Scott and Carhart-Harris proposed that psychedelic drugs, including LSD and psilocybin (the main psychoactive component in magic mushrooms), could help such patients by inducing transformative changes in brain function.

Scott, who lectures at Imperial College London, wasn’t sure how such an out-of-the-box idea would be received. But he soon found comfort in the audience’s intrigue. “The first thing was to think…‘Well you know, theoretically, that’s not a stupid idea, let’s have a look at it,’” said Sophie Duport, associate director of research at the Royal Hospital for Neuro-disability, who attended the talk.

In many ways, the hospital’s interest in the proposal stems from a lack of alternatives, says Scott. To date, tested therapies range from pharmacological to brain-invasive interventions, but none have had significant or lasting effects on restoring conscious awareness to patients in states of unresponsive wakefulness. “Clinicians and carers of these patients, their families, and so on, are quite desperate for anything,” says Scott. An estimated 2.5 million people a year sustain traumatic brain injuries in the U.S., predominantly caused by falling.

The proposal is founded upon a seminal study from 2017 led by Carhart-Harris, head of the center for psychedelic research at Imperial College London. Carhart-Harris and other neuroscientists investigated the extent to which LSD, psilocybin, ketamine, or a placebo render the subjects’ brains chaotic or “complex.” In neuroscience, “complexity” refers to how many different possible patterns of brain activity can happen over a specified period of time.

To illustrate this concept, Scott asks us to think of a healthy brain as a machine with the ability to run several different programs. This machine, he says, has high complexity. Conversely, a machine that can only alternate between two programs has low complexity. Similarly, a brain that can experience the whole realm of human emotions—from happiness and joy, to pain and suffering—has high complexity; whereas a brain that is fixed upon few or no emotions, as with DoC patients, has low complexity.

Complexity in the brain is tightly linked to a person’s level of conscious awareness. For example, patients in vegetative, minimally conscious, or anaesthetised states all have low complexity; whereas the waking brain shows very high levels of this complexity measure.

Until then, researchers thought complexity levels peaked during the waking state, but Carhart-Harris’ study proved otherwise. “We were fascinated because it was the first time we had seen the measure go above the normal baseline of just when people are awake,” says University of Sussex consciousness researcher, Anil Seth, co-author of the study with Carhart-Harris. In other words, psychedelics made the brain more complex than what’s typical in mundane, waking life.

But the precise how and why behind this finding remain a mystery, he says. While neuroscientists understand that psychedelics act on a specific serotonin receptor largely residing in the default-mode network (DMN)—a cluster of connected regions essential for conscious awareness—little is known about how these small-scale chemical events translate into broader transformations in conscious experience, says Seth.

READ: Rick Strassman on DMT and the Mystical State

The overarching question for Scott and Carhart-Harris was whether they could harness psychedelics’ power to boost the brain’s complexity level for patients in states of unresponsive wakefulness. Doing so, they speculated, could help restore conscious awareness.

But what “restoring” conscious awareness actually means for these patients’ quality of life and their carers is a difficult question, says Jenny Kitzinger, Cardiff University’s co-director of the Coma and Disorders of Consciousness Research Center, and a relative to someone who eventually regained some level of consciousness after a severe brain injury.

According to Kitzinger, people often form highly romanticized narratives about patients reawakening from unresponsive states. There’s a misconception, she says, that, “if you can find ‘the golden key’ and open it, they will be released and come back and be able to make choices and communicate.”

The truth is much bleaker: Patients never truly return to their former, fully functional selves, she explains. Instead, they often experience advanced dementia-like symptoms, such as confusion, disorientation, and general distress. Given this reality, Kitzinger is not convinced psychedelics would necessarily improve the lives of patients and their respective carers, even if they were to become available treatments in the future. Indeed, some families even reject all new treatments for fear of adding further stress to the already vulnerable patients, she says, although others will leave no stones unturned.

“If my son, Miles, were still alive and still in that condition, I would have wanted to do any single thing that could possibly have helped him,” says Lu Spinney, who spent five years caring for her son, who was left in a minimally conscious state following a snowboarding accident. She recounts the story in her book Beyond the High Blue Air.

Spinney tried various treatments to help her son, including a sleeping pill called Zolpidem, which, paradoxically, temporarily restored consciousness in a handful of cases around the world. But for Miles and many others like him, this “miracle drug” did not work. Instead, drugs are often used to help DoC patients improve their quality of life, such as with melatonin, which helps them rest. “[Melatonin] does exactly what it should be doing. It helps them sleep better, which means they’ll be better during the day,” says Duport.

Using psychedelics for DoC patients also raises a host of ethical questions that need careful consideration, writes Andrew Peterson, bioethicist at George Mason University, in a follow-up article to the original proposal, published six months later in Neuroscience of Consciousness. The most obvious of these ethical issues is these patients’ inability to provide consent. He also warns of the “self-awareness paradox”—a scenario where an intervention might successfully raise a patient’s conscious level, but also make them aware of their predicament. Scott recounts a frightening possibility where “you wake someone up to the reality that two years have passed, their wife has left them, they’re paralyzed, and fed through a tube everyday.”

But while these ethical considerations are serious, they are not specific to psychedelic interventions, explains Scott. Scientists have already conducted experiments using deep brain stimulation without patients’ consent; and any treatment seeking to change a patient’s conscious awareness runs the risk of inducing the “self-awareness paradox.” What is specific to psychedelic interventions, however, is the possibility of a “bad trip,” explains Peterson in an email. “If a ‘bad trip’ occurred, that patient would have a ‘nightmarish awakening,’ not a smooth recovery.”

Scott says he plans on carrying out a small-scale study to measure the levels of complexity in the brains of DoC patients of differing severities, while on psychedelics. For now, the team is still searching for funding and intends to apply for ethical approval. Even if the study is approved, Scott isn’t convinced psychedelics will revive DoC patients.

While psychedelics have a uniquely transformative effect on brain functioning, researchers are still far from understanding the neuroscience underpinning conscious perception, he says. Nonetheless, Scott says there are good reasons to try using psychedelics in DoC patients. “Like all these interventions, it might be the case that a small proportion of patients have benefits,” he says. “And that, in and of itself, is a good enough reason to pursue it.”

*This article was originally published in DoubleBlind Issue 3. 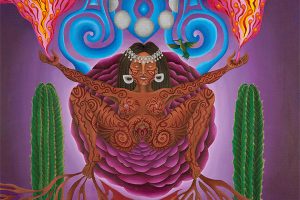 This Chilean-born painter explores her ancestral lineage, the spirit world, and all that glimmers in between