Psilocybe ovoideocystidiata: The Ohio Valley Shroom Taking Over the World

Well, two continents at least—but is it a good thing?

The wood-loving Psilocybe ovoideocystidiata was first named by mycologists Richard Gaines and Gaston Guzman in 2007, based on mushroom samples taken in 2003 from wood chips at the side of a trail in Evansburg State Park, Pennsylvania. Richard also reportedly got caught by the cops in possession of these mushrooms at Burning Man, before they had been given their scientific name.

It’s rumored that Richard Gaines was responsible for transferring Psilocybe ovoideocystidiata to the west coast of the USA, planting patches in wood chip landscaping where they then proliferated naturally, and can now be found on both sides of the country.

Psilocybe ovoideocystidiata was named after their ovoid (balloon-shaped) cystidia—the characteristic cells found on various parts of a mushroom, in this case on the gills which disperse the fungal spores. Due to the wide variety of shapes found across different mushroom species, cystidia are commonly used by many mycologists to get a good idea of a mushroom’s identity.

The caps of Psilocybe ovoideocystidiata are dome-shaped (convex), sometimes with a small bump in the middle (subumbonate), and can grow up to 1¾ inches (4.5 cm) across. Like many Psilocybe species, the caps change color as they dry out (hygrophanous), and as the mushrooms mature. The mushroom’s appearance can vary depending on age and location, with the cap color typically ranging from a pale yellow when dry, to chestnut or orange-brown when fresh. Some older specimens can even turn a beautiful blueish-green (presumably a result of psilocybin oxidation), drying out to a silvery grey.

The hollow stems can grow up to 3½ inches (9 cm) tall and are slightly club-shaped at the base (subbulbous). The stem’s off-white color can also be streaked with patches of yellow, brown, or blue. The partial veil, which covers the gill in young mushrooms, can remain stuck around the stem or almost disappear, leaving a barely perceptible ring (annular zone). Unlike other Psilocybe species whose veil remnants can be found just under the cap, in Psilocybe ovoideocystidiata, this feature is typically seen around halfway down the stem. The mushroom is said to smell like flour (farinaceous), sometimes with a touch of spice.

Apart from blue bruising, spore color is another key identification tool for Psilocybe mushrooms. Psilocybe ovoideocystidiata gills meet the stem at right angles (adnate), and range in color from whitish-brown when young, to purplish-black when loaded with spores. Like other psilocybes, Psilocybe ovoideocystidiata spores feature a purple-black coloration, which will be apparent in a spore print. P. ovoid’s spores are legal to buy online “for microscope purposes” in many places. Yet, germinating these spores may be illegal—unless you are cultivating in a decriminalized region.

In the eastern United States, Psilocybe ovoideocystidiata is most commonly found along the Ohio River valley, all along the east coast, as far inland as Missourito and as far south as Georgia. In the western part of the country, these mushrooms are rarer but are usually found closer to the coast, from San Diego to Seattle. Due to their deliberate introduction to the west coast, Psilocybe ovoideocystidiata is more likely to be found growing in urban landscaping than in wild patches in these regions.

Just as Richard Gaines was thought to have introduced Psilocybe ovoideocystidiata to the west coast in the early 2000s, in more recent years there is evidence that this mushroom’s range is spreading, extending further, likely through a mixture of deliberate human introduction and natural spore dispersal. Due to international trading and swapping of spore prints, Psilocybe ovoideocystidiata also now grows wild in Europe, where they have been found in outdoor wood chip piles in both Switzerland and Germany.

It’s important to note, however, that mushrooms—even magic ones—can become invasive species when moved into new habitats. As such, it’s important to look for and protect mushroom species native to your own region and climates, as well as remain mindful of containing non-native mushroom species you may be cultivating in your home. In the wild Psilocybe ovoideocystidiata mushrooms can be found growing in a few small clusters, or in patches of many hundreds.

Unlike other wood-loving Psilocybe mushrooms (such as Psilocybe cyanescens or Psilocybe allenii), the mycelium doesn’t need cold temperatures to produce mushrooms, and the peak Psilocybe ovoideocystidiata season tends to vary from region to region. In its native range of the Northeastern U.S., mushrooms can typically be found from late April to early June, and occasionally all the way through to November. Flushes of mushrooms are most prolific soon after a few days of rainfall.

As with many species of psilocybin-containing mushrooms, few scientific studies of potency exist for Psilocybe ovoideocystidiata. A chemical analysis of this species performed by John Allen and colleagues in 2009 found the following alkaloid contents:

If seeking to find a reliable dose of Psilocybe ovoideocystidiata for yourself, as with all new psilocybin mushroom experiences, it’s usually best to start a little lower than the dose you’re used to and add more if required. Keep in mind that potency can vary both between individual mushrooms and patches, so plan your dosage with caution if you have any doubts. As with other wood-loving Psilocybe species, there may also be the risk of wood lover’s paralysis. Additionally, possession of Psilocybe ovoideocystidiata is still illegal in many places.

Other non-psychedelic and potentially dangerous lookalikes include many of the “little brown mushrooms” (LBMs) that may grow near to, or even among, Psilocybe ovoideocystidiata patches. These LBMs are an informal fungal group named by mushroom hunters for their close similarity to one another and can include genera such as Galerina, Cortinarius, Hypholoma, and Leratiomyces.

As Psilocybe ovoideocystidiata can grow in large patches, if you happen to come across such a patch it’s important to resist the urge to go into a foraging frenzy, and instead carefully identify each and every mushroom you pick. When foraging out in the field, use these two key features to help identify psilocybe containing species:

Extra identification tips can be found from online sources like The Shroomery, Mushroom Observer, or iNaturalist, where an experienced user base can help you verify your finds. If you’re fascinated by fungi more generally, then consider joining a local mycology group in your area. These groups have various levels of tolerance for members with hallucinogenic intentions, so approach the discussion of psychoactive species with some caution until you’ve got a feel for the group. Keep in mind that foraging for Psilocybes is still illegal in many places.

If you’re ever in doubt of a mushroom’s identity, it’s best to avoid ingesting it. Even if you do identify correctly, having a high level of certainty will help you enter any psychedelic experience without any worries of misidentification—which can be amplified during the experience itself.

The ability of Psilocybe ovoideocystidiata to grow all year round outdoors makes them—perhaps surprisingly—a great potential species for growing indoors, which is generally more difficult with other cold-weather wood-loving species such as Psilocybe cyanescens, Psilocybe allenii, or Psilocybe azurescens.

If growing Psilocybe ovoideocystidiata indoors, cultures can be started on grain, but as with all wood-loving Psilocybe species, the bulk substrate of choice should contain a large proportion of wood chips or sawdust. This wood should be preferably sourced from hardwoods such as alder, oak, beech, or birch. Although softwoods from coniferous trees can be used, their sap can contain compounds that may slow or prevent the growth of mycelium.

Other substrate materials can include potting soil, river sand, and coco coir, which can be added to improve nutrients or slow water loss from the substrate over time. These ingredients can be mixed with colonized grain into cakes, jars, or tubs, and grown indoors in a terrarium. Like many wood-loving species, Psilocybe ovoideocystidiata is more contamination resistant than Psilocybe cubensis, and bulk substrates will often yield mushrooms with less attention needed to pasteurization and other sanitary practices. Due to Psilocybe ovoideocystidiata’s growing habitat range, it can also be grown outdoors in shaded tubs or beds and kept well watered for a continuous crop of mushrooms.

Finally—of course—it’s important to remain mindful that cultivating this species may be considered “manufacture” of psilocybin, and is thus still illegal in many regions. Always familiarize yourself with the laws in your area before cultivating psilocybin mushrooms. 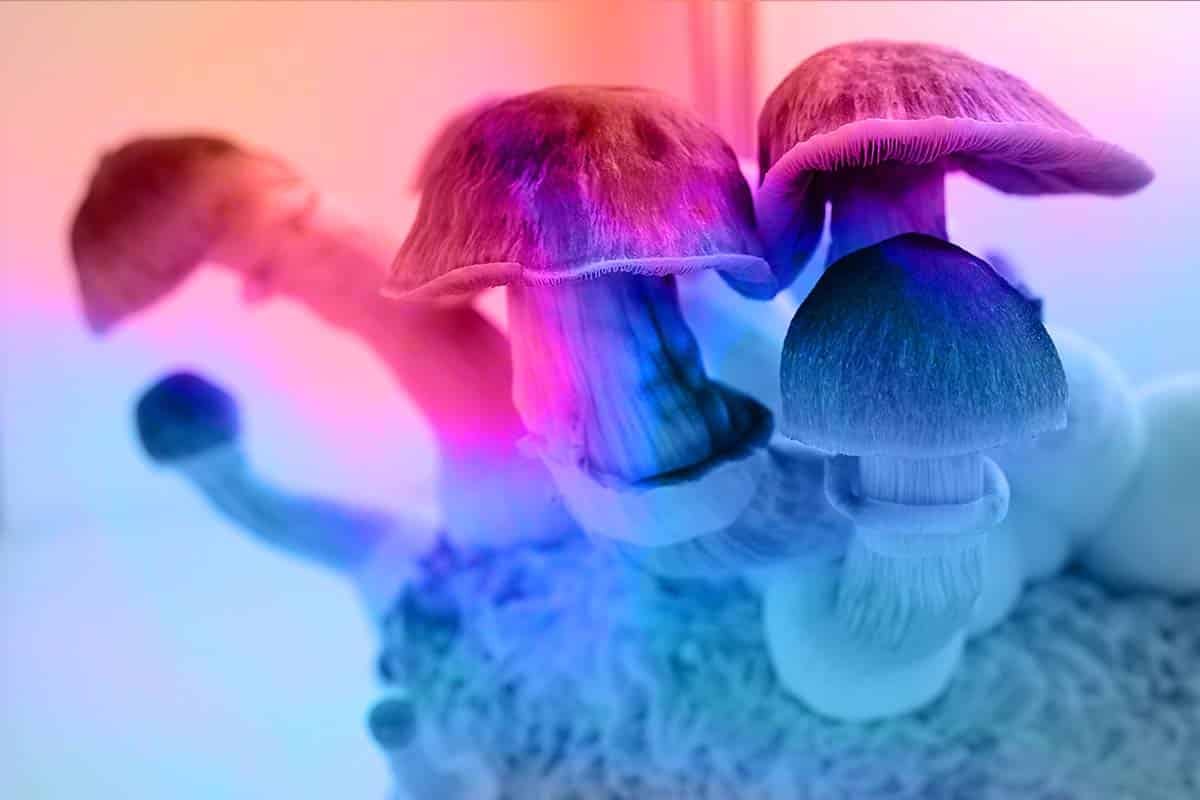 The origin of this fast-growing mushroom may be shrouded in underground lore—but cultivators still love reliable fungus.

The Psychonaut’s Guide to Kabbalah and Spiritual Journeying

What the ‘Four Worlds’ of Kabbalah can teach us about spiritual highs and lows.