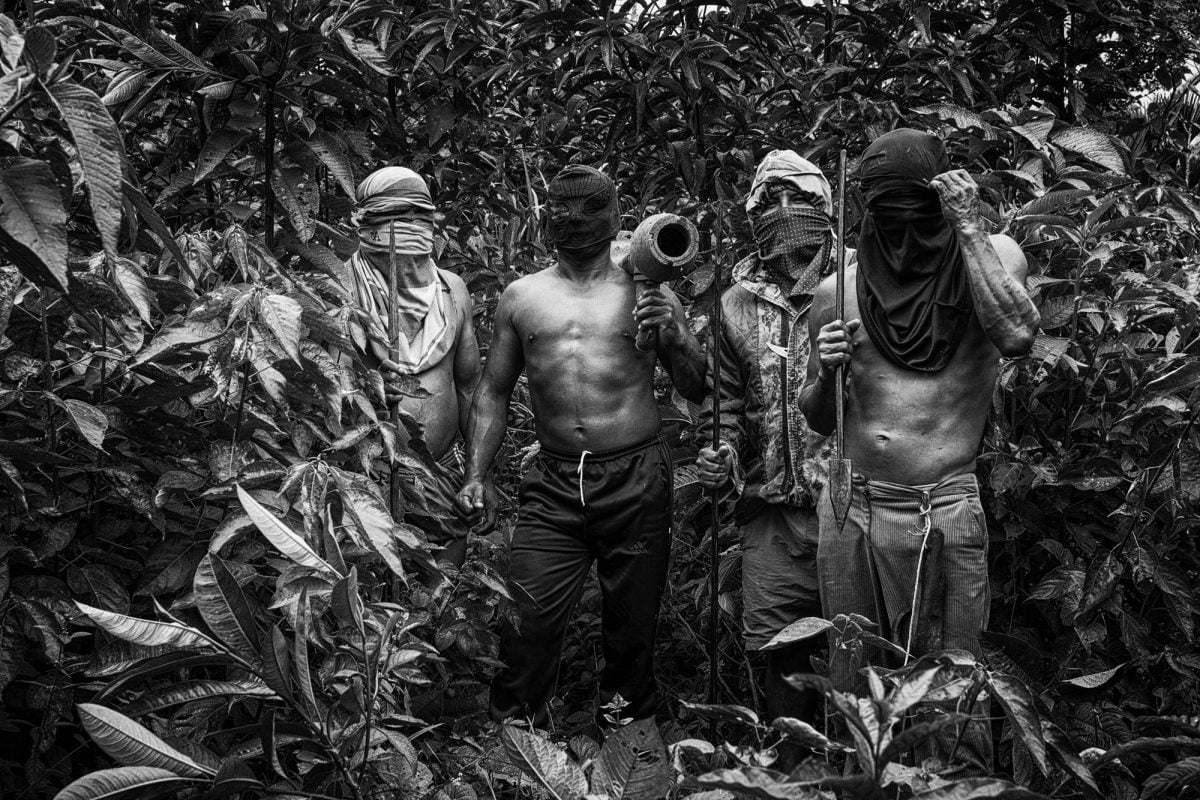 Indigenous communities in the Amazon predicted the destruction before a single bulldozer plowed through the rainforest. The origin story of the Sápara people speaks of the first Sápara man, Piatsaw, who prophesied the end of his community. The Sápara were once one of the largest indigenous nations in the Northwest Amazon Basin. Today, there are 573 Sápara left in Ecuador and only three of them speak their original language.

Among all the indigenous communities shot by photojournalist Nicola Ókin, this sort of forecasting—whether through dreams, plant medicine ceremonies, or community gatherings—continues to serve as an integral part of the resistance against threats to their territories. In the now decades-long fight against foreign companies extracting oil and mining, they are not only protecting their livelihoods, but they’re also protecting the Amazon’s ecosystem and all that’s contained within it. Leila Salazar-López, executive director of Amazon Watch, tells DoubleBlind these communities’ concerns about the environment range from “the most microscopic organism to the greatest Kapok tree.” The land they’re protecting is where their homes are located, but it also, in and of itself, contains a deep spiritual value and history that connects them to their ancestors and identity.

This was the basis for a proposal submitted by the Kichwa people of the Sarayaku, another one of the communities shot by Ókin, to the Ecuadorian government last year. The Living Forest proposal demands the state and the international community recognize their land as sacred as well as the connection between the wellbeing of humans, animals, plants, and the planet at-large.

“This vision is neither a quaint belief nor a simple conservationist ideal,” the proposal states. “It is instead a call to the people of the world to learn once again to feel this reality in their very being. This metamorphosis will only be possible once we learn to listen to and dialogue with these other beings, who are part of a cosmic conversation that goes well beyond the dialogue of the deaf until now carried out exclusively among us humans.” The proposal calls, specifically, for an end to all oil, mineral, and lumber extraction in their territories.

And yet, as Ókin chronicles in his ongoing project Piatsaw, the threats against indigenous communities in the Ecuadorian Amazon are still an everyday reality. He’s been documenting the resistance efforts—primarily among different Shuar communities as well as the Kichwas, Sápara, and A’i Kofán—since 2016.

At the time, Rafael Correa was still the president of Ecuador. He made large-scale mining and oil extraction deals with Chinese enterprises a pillar of his economic program, causing irreversible damage to the Amazon, violently repressing demonstrations, and criminalizing more than 700 people protesting his policies. In 2017, when the country’s current president, Lenín Moreno, was elected, he was praised by conservationists for saying he’d do more to protect the country’s delicate ecosystems. Instead, he’s made plans to ramp up the extraction.

“It was just a speech,” Carlos Mazabanda, Ecuador Field Director for Amazon Watch, tells DoubleBlind. “In reality, his actions have been completely different.”

Currently, Moreno plans to follow Correa’s agenda to extract oil in 21 new areas of the Ecuadorian Amazon, which, in total, will affect 90 percent of indigenous territories in the country. Each area is roughly 568,000 acres, rich with flora and fauna.

Mining projects are also planned for ten percent of the Ecuadorian Amazon, all in areas where indigenous communities live. These communities are, for now, successfully resisting new mining projects, except for one, called Mirador, run by Chinese capital company Ecuacorriente SA (ECSA).

In reality, these extractive activities not only result in the eviction of people from their homes, but also leave a wake of annihilation in their path. One of the first steps typically taken by oil and mining enterprises is massive deforestation to make way for roads and machinery. Once the extraction begins, it pollutes the air and rivers, poisoning plants, animals, and the communities who rely on the water for drinking, bathing, and fishing. The pollution causes skin issues, stomach infections, and, in some areas where it’s particularly high, even cancer.

The Sarayaku write in their proposal that these extractive activities are the result of a flawed perspective that views nature as merely “a landscape for aesthetic appreciation” and “a resource for exploitation.” A shift in perspective, they say, is not only essential for the protection of the Amazon but for the preservation of the entire planet.

Nicola Ókin is a freelance photographer who works in the areas of reportage photography, editorial, photojournalism and portraits. Over the last 14 years, he has traveled through Northern Mexico, India, Pakistan, Kashmir, and Sardinia. Widely published, Ókin’s work can be seen in National Geographic (Germany), Time Magazine, The New Yorker Magazine, The Guardian, and Vanity Fair, among others.

Alex Grey on His Journey to Finding God

"We need to quickly understand that this is a sacred world. That is the message of psychedelics."