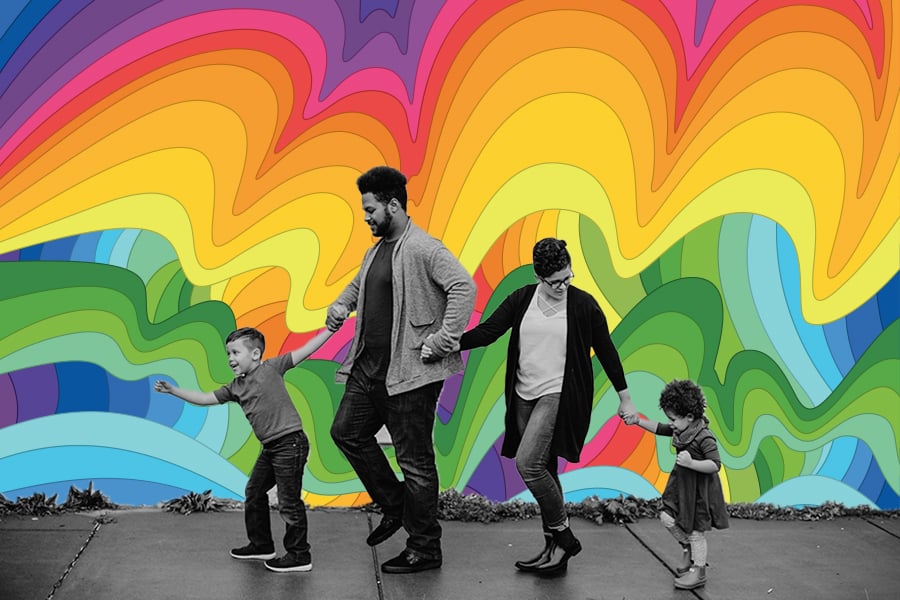 DoubleBlind Mag is devoted to fair, rigorous reporting by leading experts and journalists in the field of psychedelics. Read more about our editorial process and fact-checking here.
Table of Contents
1 DoubleBlind: Should parents speak to their kids about psychedelics?
2 DB: If it’s possible for parents to safely discuss psychedelics with their children, why do you think it’s important to do so?
3 DB: When is the right time to start talking to kids about psychedelics?
4 DB: Should parents disclose their own psychedelics use to their children, or should they keep the conversation focused on harm reduction?

Rebecca Kronman is a New York-based psychotherapist, a mother of two, and the co-founder of Plant Parenthood. In her private practice, she helps clients work through psychedelic experiences and is trained to administer ketamine-assisted psychotherapy. When Rebecca, a longtime yoga and mindfulness practitioner, realized that her experiences in the altered states were closely tied to those and other contemplative practices, she began to professionally explore psychedelic harm-reduction and hasn’t looked back. “It took over my private practice in a great way,” she tells DoubleBlind.

Through Plant Parenthood, a digital (and sometimes in-person) community for parents interested in psychedelics, Rebecca and co-founder Andrew Rose, offer regular integration circles for parents and non-parents to talk about psychedelics and family life. “Our intention,” she says, “is to create a safe container to have really challenging discussions—and often ones that are being brought up for the first time in people’s lives.”

She and Andrew also write and speak about psychedelics and families in order to destigmatize the subject and to challenge what she calls “the Western framework for what is possible in this space.” In addition, Plant Parenthood hosts webinars to educate parents on including their children in the integration process in non-medicinal ways.

“While communities around psychedelics have existed for a while,” says Rebecca, “more niche communities are now starting to form,”—including for parents, BIPOC communities, people who identify as LGBTQ+, and other groups. While larger psychedelics communities serve an important purpose, gathering with people who’ve had similar life experiences, Rebecca says, “helps us feel alignment, attunement, and resonance.”

We sat down with Rebecca to deepen our readers’ understanding of the still-taboo subject of talking to kids about psychedelics:

DoubleBlind: Should parents speak to their kids about psychedelics?

RK: It depends a lot on a person’s individual circumstances and their risk profile. I inhabit this world with a ton of privilege as a white, able-bodied, financially secure person. For me to talk about my psychedelic experiences or run a group about psychedelics—I don’t fear any legal repercussions or the involvement of Child Protective Services. But it can be a concern. For people who don’t possess the same level of privilege, disclosing this information to their kids may not be a wise option. Something else to consider is when there’s a contentious custody situation: bringing up a topic like this when you might risk losing your child—no, then you don’t bring it up. There’s a risk-reward calculation that people have to make.

DB: If it’s possible for parents to safely discuss psychedelics with their children, why do you think it’s important to do so?

RK: There is still really piss-poor drug education in our school systems—it’s mired in misinformation, disinformation, and stigma from the war on drugs. So, for any parent who is informed about drugs, it does become their responsibility if they want their kids to receive accurate information.

The other thing is that our kids will access these substances at some point in their lives—whether it’s that they’re taking it, or it’s around them. Most people don’t get a choice as to whether their kids will ingest this stuff or not; prohibition—as we know—just does not work. It’s important for us to help our children prepare for those experiences because some of them can be really intense.

We want to make sure they are aware of things like set and setting, and of ensuring they know that what they think they have is what they actually have—in other words, testing their substances. [When parents bring this information to their children], it’s a way to open that channel and make it safe and available for them to remain in dialogue.

The psychedelics conversation can also be an invitation to a number of different important discussions.

Another conversation that I think is peripherally related, but also important, is the substances’ history, and the history of using altered states for therapeutics in indigenous lineages. [That can lead to a discussion] about the whitewashing of this field, cultural erasure, and recognition of the land that we’re occupying. It’s important in this space that’s becoming so medicalized and Westernized—when really, the roots of this work did not begin in a lab in the 1940s.

DB: When is the right time to start talking to kids about psychedelics?

RK: Part of the beauty of the harm-reduction model is that it follows people’s intuitive wisdom about what’s the right way, and when is the right time, for them. In an ideal world, the discussion about psychedelics precedes the exposure to them. But that doesn’t always happen, and it’s not always plausible.

With younger children, a way to destigmatize this topic is to talk about substances and addiction as a broad topic. [For instance, you can point out how] we ingest substances like sugar and caffeine every day and can use them in ways that are moderate and supportive of our wellbeing—or in ways that are harmful to us.

When we categorize these things more broadly and talk about our own struggles with things that grab a hold of us—like screens, as another example—I think it allows us to talk about these things in a destigmatizing way, and also with a compassionate lens. It’s easier said than done, but saying things like ‘I know hard it is for me to get off my screen because I’m addicted to it, so I recognize that it’s really hard for you to get off your screen.’ Or another example would be to say, “this is coffee and you can have a tiny sip right now, but you can’t have it regularly until you’re older. If Mommy doesn’t drink coffee, I’ll get a really bad headache because I’m addicted to this substance.”

We can talk about this stuff in a very matter-of-fact way. It is in their world, and in their lives.

And I also think about this toggle between information that isn’t asked for and information that is asked for. I’m always wrestling with this question. As an example, for my son, who’s seven, cannabis is not exactly in his world in a very direct way; there are no second graders smoking doobies on the playground. Yet he can smell it, and he knows that it’s in his family, that his parents take it. So, is it relevant for him to have lots of nuanced information on cannabis? Probably not. But we talk about it a little.

In Plant Parenthood we talk to a lot of families with older children who are maybe opening up this discussion for the first time. For them, an interesting way to enter the conversation can be asking, “what do you know already about this topic?” Ask them to share where they’re at so you can respond to, or perhaps correct, any information that they have.

DB: Should parents disclose their own psychedelics use to their children, or should they keep the conversation focused on harm reduction?

RK: The answer to that question depends on who you are and your level of monitoring by law enforcement and Child Protective Services. But I think that parents can communicate something important about values while sharing about their own psychedelics experiences. We were talking about this value of equity and fairness earlier; there are also the values of looking at oneself, of continual self-improvement, as well as the freedom to alter one’s consciousness.

In addition, I think it’s important to be mindful that we are communicating from a place of ‘what serves our children?’—not offloading something that might be too much for them. The altered state can be a very profound, intense experience, and our children are not there to hold us.

A lot of people who we interact with are coming to this space with a sort of evangelist mindset–really excited about sharing this—and that is wonderful and exciting, but when it comes to disclosure, we want to be mindful of how much and how we communicate to our kids. And we also want to honor the fact that these experiences aren’t for everyone, maybe including our own children.

This interview has been edited for brevity and clarity.

Will California Legalize Psilocybin in 2022?

California is already considering a psychedelic legalization bill in the legislature, but citizens may have the opportunity to vote on a psilocybin-specific initiative next fall. Here’s the 101 on what the Initiative is all about.

How To Vet Your Psychedelic Guide

Get references, ask critical questions, and most importantly, follow your gut.