Blue Meanies Mushrooms: A Guide to the Potent Panaeolus cyanescens

There are few psychedelic mushrooms as potent as Blue Meanies—or with so many names.

“Blue Meanies” is the common name for Panaeolus cyanescens. The name says a lot about this species; they turn dark blue when picked and can certainly pack a punch. Panaeolus cyanescens are one of the more potent psilocybin-containing mushrooms, despite their unassuming stature. P. cyanescens produces small medium-sized brown to white mushrooms that are easy for amateur enthusiasts to overlook.

Mushrooms from the genus Panaeolus are very common; they grow globally in tropical and temperate environments. Panaeolus cyanescens is a tropical/subtropical grassland species, often found in dung—just like another familiar mushroom we know. If you were not aware of Blue Meanies, you could easily miss a patch while foraging for the more popular Psilocybe cubensis. The former is believed to contain two to three times the psilocybin found in cubensis.

What Are Blue Meanies Mushrooms?

Panaeolus cyanescens come from the genus Panaeolus. Mushrooms belonging to this widespread genus are generally small, have black spores, and often grow on dung.  But, not all Panaeolus contain psilocybin—a fact we will come back to later in this article. The Panaeolus genus contains thirteen species that produce psilocybin, including Panaeolus cyanescens and Panaeolus cinctulus. Panaeolus mushrooms are called “mottlegills” due to the irregular spots or patches of color on their gills.

But, there’s something else worth noting about this particular species: Panaeolus cyanescens is a mushroom with many names. So many, in fact, that knowing what to call this particular species can be confusing. To start with the basics, the name “Panaeolus” in Greek means “all variegated,” descriptive of the fungi’s spotted texture. The species name, cyanescens, is derived from “cyaneus,” meaning blue, for the color the flesh becomes upon bruising.

Yet, the naming confusion doesn’t stop there. Taxonomy enthusiasts may recognize this mushroom’s previous name—now a synonym—Copelandia cyanescens. And if things weren’t already convoluted enough, Panaeolus cyanescens is also often confused with another psychoactive mushroom, Psilocybe cyanescens. Both mushrooms are abbreviated the same way, as P. cyanenscens. Yet, these two species are very different mushrooms: The first is a dung lover, the other a wood lover. (Although each has comparable levels of psilocybin.) Finally, this mushroom is called “Pan cyan,” after its new Latin name.

The taxonomic conundrums began early for this mushroom. It was first described in Sri Lanka as Agaricus cyanescens by Berkeley and Broome in 1871. A few years later, it was described by Bresadola from the Philippines, who named it Copelandia papilionacea; it was then named Copelandia cyanescens by Singer in 1951. The species was named Panaeolus cyanescens by Saccardo in 1887, which is now its official formal name. The genus Copelandia was deprecated, meaning that it’s no longer valid.

Panaeolus cyanescens is thought to have originated in Asia. This fungus belongs to the family Coprinaceae, the same family as the common mushroom Coprinus comatus, known as “Lawyers wig.” Yet, mushrooms in the Panaeolus genus have some unique characteristics: the gills of Panaeolus do not melt away (deliquesce) as do the members of the related genera Coprinellus and Coprinopsis, which are regarded as lookalikes.

In the field, Panaeolus cyanescens tend to be light grey or off-white at maturity. When young, the caps are light brown and then fade to off-white or light grey. Occasionally, they have yellowish or brownish tones. The caps (pileus) are approximately 0.5 to two centimeters in diameter, at first hemispheric, then expanding to bell-shaped (campanulate) or convex. The cap margin is incurved when young. The caps are slightly hygrophanous, losing their color as they dry out, often developing cracks in dry weather.

The gills have a broadly adnate to adnexed attachment. To clarify these terms, an adnate attachment means the gills are mostly attached to a stem, adnexed means only slightly. Panaeolus cyanescens gills are close, black or grey, and have a spotty, speckled, or cloudy appearance caused by the way the spores ripen together in tiny patches on the gill surface. The different patches darken at different times, causing a mottled appearance.  As the spores mature, the gills turn black. All species except for Panaeolus foenisecii have a jet black spore print.

The stem (stipe) tends to be seven to 12 centimeters long and two to three millimeters thick. The width is equal along the length and slightly enlarged at the base. The stem is colored like the cap and covered in a fine white powder. The mushrooms have a flour-like (farinaceous) smell and taste. As with other psilocybin-containing fungi, when damaged, the mushrooms bruise greenish or blue.  This coloration is often seen on the cap or the stem with Blue Meanies mushrooms.

Where Do Blue Meanies Mushrooms Grow?

Panaeolus cyanescens is a tropical and sub-tropical species. In tropical regions, the mushrooms grow year-round. In the subtropics, they grow from late spring to autumn, depending on rain and humidity. They are known to occur in temperate zones during wet and humid parts of summer. Blue Meanies are mostly found growing on cattle or horse dung in pastures and fields, growing singly and in groups. They appear in spring or during rainy seasons.

Their range in the United States is from Florida and along the Gulf Coast, where it fruits virtually year-round on “cow pies.” It is thought they were introduced to other countries by the movement of livestock; it is assumed Panaeolus cyanescens was introduced to the islands of Hawaii during the early 1800s when cattle were imported from the Philippines. Now, they occur throughout the tropical and subtropical regions of the Northern and Southern Hemispheres. In addition, Blue Meanies mushrooms are commonly found in Mexico, South America (Colombia, Bolivia, Brazil, and Peru), Eastern Australia, India, Bali, Southeast Asia, South Africa, France, and Italy.

Is Panaeolus Related to Psilocybe?

Psilocin is thought to protect the developing fruit body from predation either through a toxic effect on the predator’s nervous system or affecting their ability to eat.  The ability to minimize predation has ecological advantages. Through close contact with Psilocybe, some Panaeolus have also gained the ability to protect themselves with psilocybin.

Albert Hofmann analyzed Panaeolus cyanescens, then known as Copelandia cyanescens, in the early 1960s after reports of “intoxications” caused by dung-loving fungi from southern France. Hofmann found psilocin in higher concentrations after analyzing the fruiting bodies, yet there were only slight quantities of psilocybin. Although the origins of these samples were mysterious to Hofman, their true origins eventually came to light: they were growing from the dung of horses bought from Indonesia to take part in a horse race.

As mentioned above, this species is quite potent. The effects of Blue Meanies mushrooms may come on quickly due to higher levels of psilocin than psilocybin. Panaeolus cyanescens is often reported to be two to three times the strength of cubensis. Yet, there is little published data to support claims about the potency of these fungi. Erowid reports that these mushrooms have a combined psilocybin and psilocin content of between 0.5 to 2.95 percent dry weight. Stivje in 1992 identified they were variable in their potency 0.17 to 0.95 percent psilocin and 0.16 to 0.19 percent psilocybin!  Psilocybe cubensis, by comparison, have been reported to have concentrations of psilocin and psilocybin between 0.14 to 0.42 percent and 0.37 to 1.30 percent dry weight, respectively.

Read: How Long Does It Take for Shrooms to Kick In?

How To Grow Panaeolus cyanescens

You can cultivate Blue Meanies mushrooms, but they are known to be more challenging to grow than Psilocybe cubensis.  In a suitable climate, they can be easily grown outdoors. They can be grown indoors with the proper setup but require patience and lots of care and attention. They are thought of as a more intermediate and advanced project—having prior success with cubensis is recommended before cultivating Blue Meanies.

As with all mushroom cultivation, a couple of unsuccessful attempts may happen, but be persistent. Panaeolus cyanescens do not grow as fast as cubensis and generally take twice the amount of time before forming pins after exposing the mycelium to fruiting conditions. The longer mushrooms take to cultivate, the greater the risk of contamination. So, cleanliness is an important component of cultivation for these particular mushrooms. It is also recommended to have experience with using casing layers.

When foraging for any species of mushroom, it is essential to know the look-alike species. A “look-alike” species is a mushroom species that may be confused with your target species. The most common lookalike species are Protostropharia semiglobata, Conocybe spp, and possibly Deconica spp. Others include Pholiotina rugosa and Tubaria furfuracea.

With Panaeolus, some of the most common lookalikes are other Panaeolus themselves, as many look similar. Panaeolus antillarum, for example, is a macroscopically similar mushroom that was once thought to be the same species —Panaeolus Antillarum has a thicker cap and is lighter in color.  There are some simple ways to tell this species apart from others.  While not a definitive way to tell the difference, the bluing reaction of psilocybin is a good indicator. Panaeolus cyanescens also have dark purple to black spores.

Galerina spp. is not necessarily a lookalike, but it is important to be aware of it as it is deadly if eaten. Fortunately, it grows in a different habitat; this toxic mushroom prefers decomposing wood and moss to dung. It has a rusty brown/orange spore print and has an orange to dark brown stem rather than the white/grey stem that bruises blue-green like Panaeolus cyanescens. Another species, Pholiotina rugosa found in the Pacific Northwest, is also important; spores are rusty orange to brown. Both species are known to contain amatoxins, the same toxins found in Death Caps (Amanita phalloides.)

Some species considered lookalikes grow on different substrates. Tubaria furfuracea, for example, is similar to Blue Meanies mushrooms, but it grows in wood chips and not dung. It has a hygrophanous cap—like Panaeolus cyanescens—and fades in color. They are more delicate and not as flexible as Panaeolus cyanescens, with a light orange to brown spore print. Psathyrella can also be mistaken for Panaeolus; this species often grow on wood or lignin-enriched soils and has a brittle stem.

When foraging, be sure to take a field guide for your area, and have a couple of forums handy on your phone.  Shroomery has the “Mushrooms Hunting and Identification” subforum. The iNaturalist app is also handy and can provide identifications when photos of the mushrooms are uploaded. There are numerous Facebook groups: Join one local to the area you are foraging; members will be aware of local lookalikes. Check all the mushrooms as you collect them; try to avoid picking those that don’t fit the description. It is also best to not trespass; always seek the permission of the landowner. A friendly tip: the gift of a bottle of wine or six-pack of beer can go a long way and may provide extra advice.  Also, keep in mind, being found in possession of psilocybin-containing mushrooms is illegal in most parts of the world. 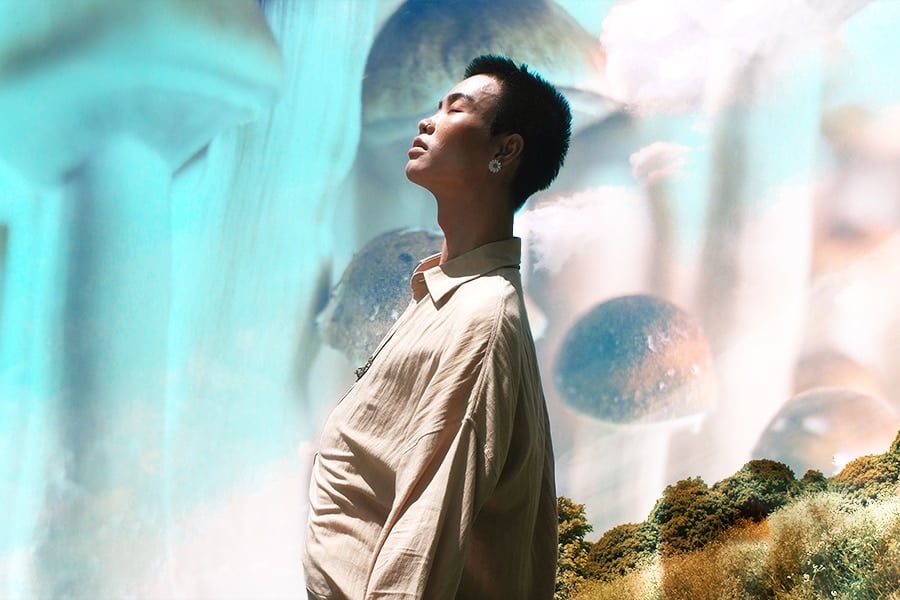 Psilocybin Therapy and the Rise of Existential Medicine

Does psilocybin therapy mark the dawn of a new era in mental health? A psychedelic researcher talks the future of existential medicine. 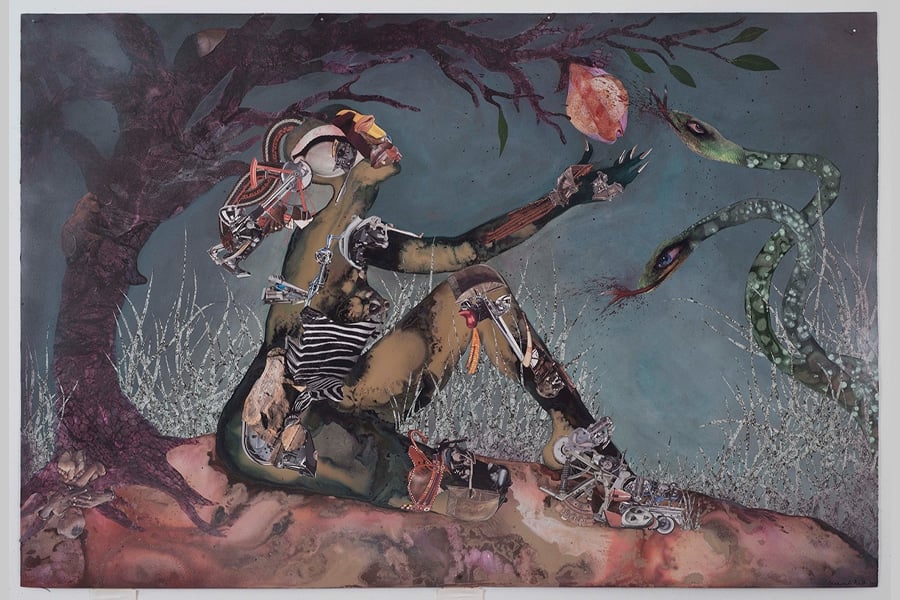 Wangechi Mutu: Between Palimpsest and Prayer