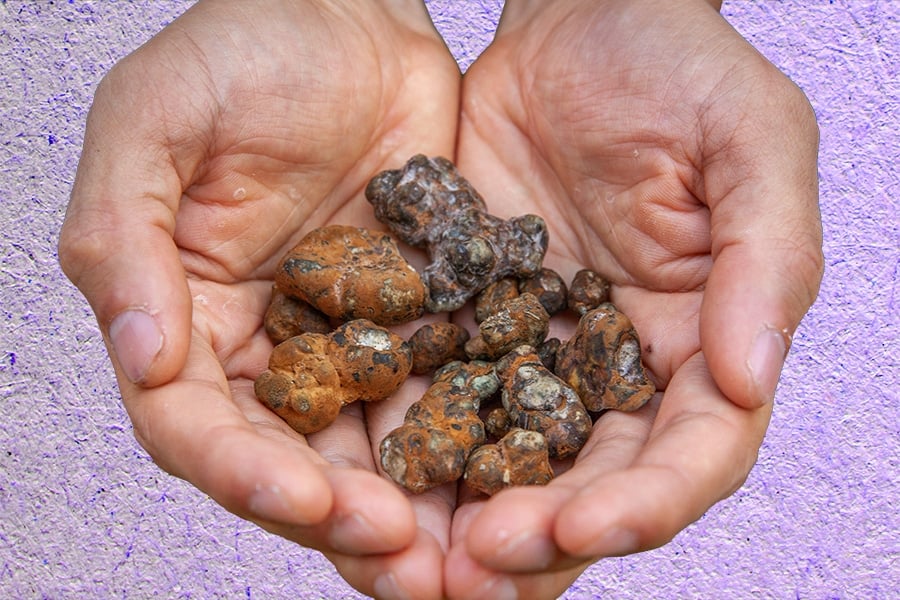 The Tragic Story Of Magic Truffles: The Elusive Wild Psilocybe

Nothing is less psychedelic than unsolved crime.

DoubleBlind Mag is devoted to fair, rigorous reporting by leading experts and journalists in the field of psychedelics. Read more about our editorial process and fact-checking here. Editorially reviewed by Madison Margolin.
Table of Contents
1 The Curious Origins of Magic Truffles
2 Where Does Psilocybe Tampanensis Grow?
3 What Do Philosopher’s Stone Mushrooms Look Like?
4 What is a Magic Truffle?
5 Psilocybe tampanensis Cultivation
6 Are Magic Truffles Legal? Yes—In Amsterdam

Steven H. Pollock discovered something quite unusual in 1977. The then thirty-year-old physician and mycologist frequently collected mushroom samples to study in his mobile laboratory, which he drove from Texas to Tampa, Florida late that summer. Yet, Pollock could never have anticipated the surprise that one of his newfound specimens had in store.

The scientist had been cultivating an unidentified mushroom for a few weeks when he noticed the formation of several small lumps growing on the mycelium. Mycelium normally look like whisper-thin cobwebs spread throughout soil; these lumps looked more like kefir grain. In time, the lumps grew larger. Pollock’s curiosity piqued. He described, dissected, and sampled the lumps in a bioassay. The results of his experiments revealed the true treasure that Pollock had in his possession: a new species.

And a psychoactive one to boot.

When talking about psilocybin, we often mention “magic mushrooms.” But mushrooms are not the only psychoactive parts of psilocybin-containing fungi. Mycelium, or structures composed of mycelium, can also contain psychoactive compounds. In some cases, fungi produce a dense ball of mycelium called a sclerotium (plural sclerotia), which can survive drying out during dry periods and store nutrients.

What Pollock found was the sclerotia of the psilocybin-containing mushroom Psilocybe tampanensis, better known in popular culture as “magic truffles.”

Upon his discovery, Pollock quickly let his colleague, Gary Lincoff know their find was something special—so special that Pollock gave the species several choice nicknames. “The rock of ages,” he called them, along with: “the cosmic camote,” “the superfantastic mega-galactic camotillo,” and “the philosopher’s stone.”

The last is the only one that stuck.

Read: The Definitive History Of Psilocybin and Magic Mushrooms

The Curious Origins of Magic Truffles

The story of Psilocybe tampanensis is, ultimately, a tragic one. In many ways, Pollock was a prodigy in the mycological sciences. He spent years researching how to cultivate various Psilocybe species, compiling his work into a book that contained numerous ways of cultivating magic mushrooms: Magic Mushroom Cultivation. One of these methods included brown rice, later demonstrated to produce mushrooms containing high levels of psilocybin. Pollock’s book, alongside Oss and Oeric’s (a.k.a. Terrance and Dennis McKenna) Psilocybin Mushroom Growers Guide, marks one of the turning points in psilocybe cultivation.

Pollock was in Tampa attending the Second International Mycological Congress, which took place over the last weekend of August in 1977. One of the lectures was by Mexican mycologist and Psilocybe authority, Gastón Guzmán, who gave a talk titled “The Hallucinogenic Species of the Genus Psilocybe in the World”. (Likely a great lecture; Guzmán authored The Genus Psilocybe in 1983.)

Pollock traveled cross-country to reach the conference, with his mobile mycology lab and a collection of his newly published cultivation guide in tow. On the final afternoon of the congress, Pollock invited fellow mycologist Lincoff to skip the lectures to go mushroom hunting—particularly for local Panaeolus spp. That afternoon, crawling around a secluded field, Pollock noticed a single specimen of an unusual mushroom he didn’t recognise. Later that day, he cloned the specimen and, in time, produced a pure culture.

He named the unusual specimen Psilocybe tampanensis, after the locale where it had first been found: Tampa. The species was scientifically described in 1978 by Pollock and Guzmán.

Pollock was a mix of entrepreneur and visionary, with plans to create the first legal, medical mushroom research laboratory. With colleague Michael Forbes he founded a company called Hidden Creek to sell P. tampanensis sclerotium by mail; he advertised his enterprise in the monthly counterculture magazine “High Times” in 1979.  That same year, Pollack discovered three more species of Psilocybe—Psilocybe armandii, Psilocybe wassoniorum, and Psilocybe schultesii—during travels in the Amazon and Mexico. The latter is named in honor of the legendary botanist and expert on entheogenic plants and fungi Richard Evans Schultes.

Pollock’s work came to an abrupt and devastating halt in 1981: the now 33-year-old was murdered during a robbery of his home and lab. The mystery surrounding his death was never officially solved. The same year, Pollock was granted a US patent for his method of producing sclerotia—another of his many accomplishments in the field of mycology.

Where Does Psilocybe Tampanensis Grow?

The eastern half of the United States consists of two broad climatic regions. Each region can be broken up into smaller climatic zones: humid continental and humid subtropical. The range of P. tampanensis fits neatly within the humid subtropical southeast part of the continent, from Florida and along the Gulf Coast to Texas, and extending into Mexico.

Psilocybe tampanensis, is a subtropical species, and very rare in nature; there are very few records in iNaturalist or MushroomObserver. It features a solitary or scattered growth pattern in sandy soils and meadows. Due to its scarcity, however, its habitat preferences are not known with certainty. What is known with certainty, however, is that the mushroom is saprotrophic; it grows on decomposing plant matter, like all Psilocybe species.

Little information is available about the potential outdoor cultivation of this particular mushroom. The type locality (where the first collection was taken from), southeast of Brandon, Florida, was the only place P. tampanensis was known for almost two decades. It was Guzmán who spotted this mysterious mushroom again in 1996, in a habitat similar to the type location: a meadow with sandy soil in a deciduous forest in Pearl River County, Mississippi.

If you’re lucky enough to find Psilocybe tampanensis, you may be underwhelmed by its appearance: It looks like many other little brown mushrooms. It has an ochraceous brown to straw brown cap, 1 to 2.4 centimeters (0.4 to 0.9 inches) in diameter. The cap shape is convex to conic with a slight umbo—an umbo is the nipple-like structure that most Psilocybe spp. share. The caps are hygrophanous, so as they dry out the color of the cap becomes buff to yellowish-grey. The cap expands to become flattened with age, and sometimes features a slight depression in the center. The surface is smooth, and becomes sticky when wet.

The gills have an adnate attachment, which means that the gills are mostly attached to the stem. They feature brown to dark purple-brown coloration, with lighter edges. The mushroom’s spore print is purple-brown. During development, the gills are protected by a partial veil: a cobweb-like layer that peels away, and the cap expands and soon disappears, a feature common to many Psilocybe.

The Tampanensis stem (stipe) is two to six centimeters (0.8 to 2.4 eight inches) long, one to two millimeters (0.04 to 0.08 inches) thick. The stem is equal in width throughout, though sometimes slightly enlarged near the base. The flesh is whitish to yellowish and bruises blue when injured. The taste and odor are somewhat similar to freshly ground flour—an aroma referred to as farinaceous.

What is a Magic Truffle?

A “magic truffle” is not an actual truffle. Rather, they’ve earned their nickname after their vague resemblance to truffles produced, most notably, by the fungal genus Tuber, which forms dense underground spore-bearing structures. The magic truffle lacks the heady aroma and subtle flavors of the Perigord truffles, due to their different biological functions, but “philosopher’s stones” appeal to humans for other reasons. In nature, sclerotia are produced by the fungus as a rare form of protection from wildfires and other natural disasters; if disaster strikes, sclerotia ensure that the mycelium can remain safe and protected underground.

A few Psilocybe species are known to produce sclerotia: P. mexicana, P. caerulescens, and P. semilanceata. Unlike the culinary Perigord truffle, which requires a mycorrhizal symbiosis with trees to survive, sclerotia are readily produced when the species is grown in culture. What results is a hardened mass of mycelium, with reported levels of psilocybin ranging from 0.31 percent to 0.68 percent dry weight. The levels of potency are dependent on the substrate in which the “magic truffles” were grown.

It is possible to grow P. tampanensis and reap the bounty of its mushrooms. Yet, most of the focus is on growing this species for magic truffles. Sclerotium forms as a way for the fungi to survive dry periods or fire, but developing these structures takes time.  Growing Philosophers Stones can take some time, up to 12 weeks to form dense nut-like structures.

The techniques used to grow Magic Truffles are not that different from how other fungi are grown.  From spore or tissue culture, onto grains, and then grown on a bulk substrate—skills learned in most mushroom cultivation courses. Psilocybe tampanensis mycelium is allowed to grow through rye grains; when colonized, the grains can be mixed with straw or manure, with a casing layer of coco-coir, and left for the sclerotium to form and develop.

It is worth noting that collecting Psilocybin-containing mushrooms is a potential felony enforced by local law enforcement agencies. The cultivation of Psilocybe spp. is illegal in many countries and is considered “manufacture.”

Psilocybin and psilocin are scheduled drugs in many countries. They’ve been given Schedule 1 status in the United States, Class A in the UK, and Schedule 9 in Australia. By extension, this makes psilocybin-containing mushrooms and their cultivation illegal. But, things are changing. Some cities and states in the United States have already passed—or are considering—decriminalization. Apart from spores, most countries control all parts of the fungus, including the mycelium.

The same cannot be said for the Netherlands. The current laws in the country only cover mushrooms, and as sclerotium is technically not a mushroom, this loophole means they are a legal product.

Mushrooms were not always illegal in Europe. While many countries made psilocybin illegal, several European countries—including the UK and The Netherlands—remained relatively tolerant of the use and possession of psilocybin-containing mushrooms until the decade of the 2000s. In late 2008, all European countries changed their laws to make psilocybin-containing mushrooms illegal, including the Netherlands.

Before December 2008, psilocybin-containing mushrooms were legal to possess and were not covered under the opium law in the country. Numerous varieties of Psilocybe mushrooms were available from “smart shops” which specialized in ethnobotanicals. Availability changed with the new laws. Yet, perhaps happily for many psychonauts, vendors quickly found a legal loophole, allowing the commercial sale of psilocybin-containing sclerotium.

Amsterdam’s cannabis cafes and over-the-counter mushroom shops have been iconic attractions in the city for decades. Now, however, it’s magic sclerotia that take the limelight. As of September 2019, these psychedelic sclerotia are fully taxed, legalized, and available over the counter—no matter if you call them Magic Truffles, Philosophers Stones, or Cosmic Camote. 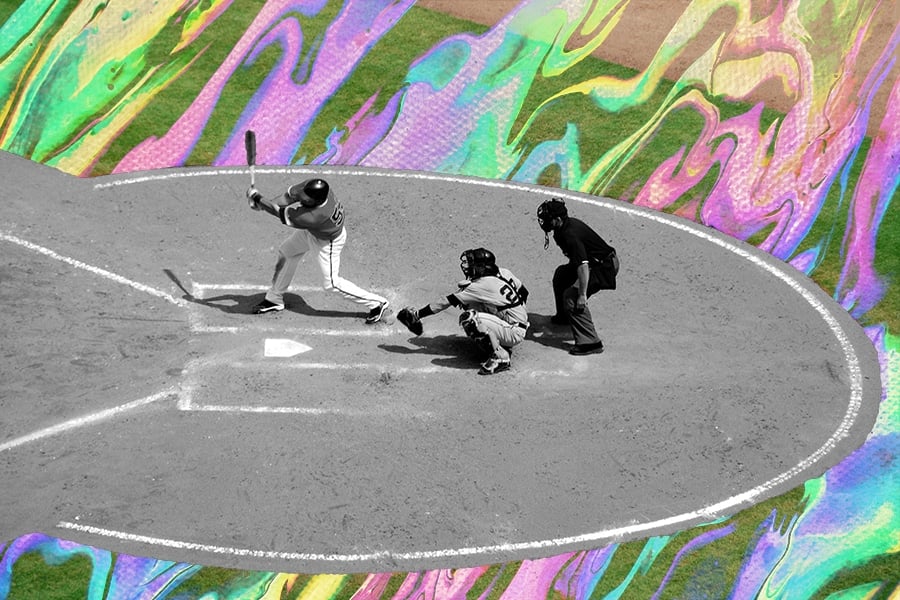 How Dock Ellis Made Baseball History on LSD

The science, the theory, and the complicated unknowns of Dock Ellis’ acid- and amphetamine-fueled baseball achievement. The Stamets Stack: Can Microdosing Really Change Your Brain?

The Stamets Stack is a dosing protocol designed to enhance cognitive ability—but what do we really know about it?