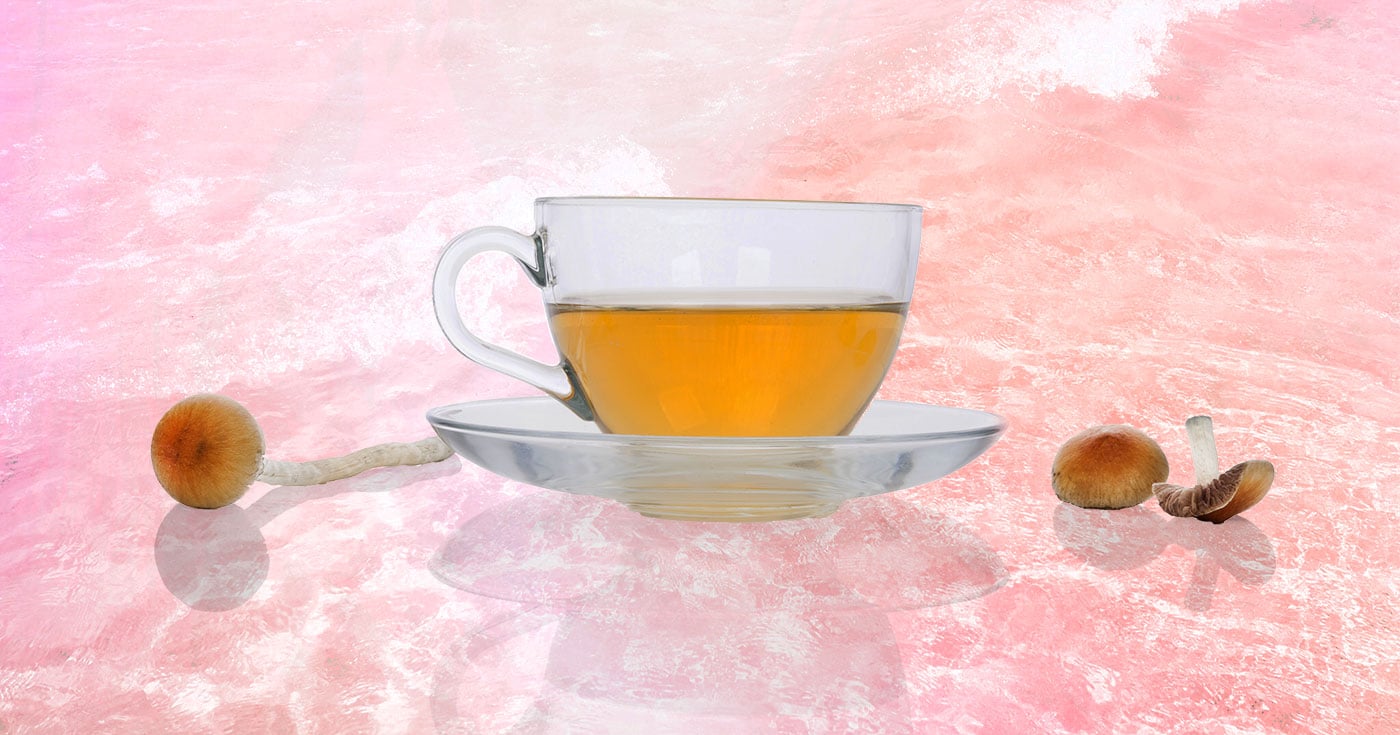 How to Make Shroom Tea: The Ultimate Mushroom Tea Guide

Mushroom tea is easy to make, but what are the benefits of drinking psilocybin extract rather than eating shrooms whole?

Staring into the inky indigo depths of a psilocybin mushroom tea is exhilarating. Breathing in the earthy steam as I let my shroom tea steep, I mentally prepare myself for what lies ahead. Drinking magic mushrooms as a tea has become my go-to method of consumption and one I recommend in my book, Your Psilocybin Mushroom Companion. The reasoning is two-fold: The tea is definitely more pleasant to consume than chewing dried mushrooms and it’s much easier on my stomach. And, the time it takes to prepare the psychedelic brew has evolved into a precious ritual that focuses my busy mind and gets me in the mushroom mood.

Is there really a difference between making mushroom tea and eating shrooms? For the more than 50 people who filled out a survey I created on magic mushroom tea, there was an important distinction: Shroom tea is much easier on the stomach than chewing and swallowing raw magic mushrooms. And I can attest personally as someone who gets nauseated easily, mushroom tea really does reduce nausea and the possibility of vomiting, at least for a large majority of people.

That’s because making shrooms into tea is in essence cooking your raw mushrooms and making them into a homemade psilocybin extract. Part of the reason mushrooms make us nauseous is all the hard to digest, raw mushroom material we’re consuming, such as chitin which makes up fungi’s cell walls. But by letting them sit in hot water for 10 to 15 minutes, the chitin and other components of the mushroom begin to break down while the psilocybin is extracted into the water, making a tea that’s both psychedelic and easier on the stomach.

But similar to lemon tek, mushroom tea can make the trip come on faster, causing it to be a bit more intense, and have a slightly shorter overall duration. However, lemon tekking goes an extra mile by potentiating the magic mushroom experience with the addition of citric acid, while a shroom tea won’t intensify the trip as much.

For both a mushroom tea and lemon tek, if you’re grinding down your mushrooms into a powder first, part of the reason it absorbs faster and feels stronger has to do with surface area. “Basically the way your gastrointestinal system and intestines that absorb drugs are set up is to maximize surface area,” says board certified psychiatric pharmacist Benjamin Malcom, a.k.a. the Spirit Pharmacist. “So if you have ground it down into a fine powder or put it into some type of aqueous solution like hot water, then it’s probably more evenly dispersed and able to be absorbed more rapidly.”

On the other hand, when you chew and swallow dried mushrooms, you’re simply not creating as much surface area as powdered mushrooms, and so it takes your stomach longer to absorb and digest all the psychoactive content. While many people who filled out the survey found the increased strength and shorter come-up to be a benefit of making mushroom tea, some folks found it a bit intense and learned they needed a smaller dose with the tea than consuming raw mushrooms the old fashioned way.

Another downside to chewing and swallowing dried mushrooms is the taste. To many, it’s not the most pleasant experience in the world and it can be hard to get down without gagging. But to side step this, many folks make their shrooms into a tea and add other tea bags to mask the earthy mushroom taste.

While I recommend adding ginger and honey for taste and digestion in Your Psilocybin Mushroom Companion, many of my survey participants are taking mushroom tea fusions to new flavorful levels by adding things like hibiscus and licorice root. Popular household favorites also include green or chamomile tea bags, and many folks reported adding lemon, lemon peel, a splash of orange juice, or other citrus for both the taste and the extra kick. A 65-year-old who filled out the survey and has taken mushroom tea “hundreds of times” reported they mix mushrooms with “Berry Red Zinger” tea bags and “never had anyone dislike the taste.”

Aside from making shrooms easier to digest, many of my survey participants reported they also enjoy the ritual of making their mushrooms into a tea. The process of breaking up their shrooms and brewing them has become its own ceremony to many, one that helps them prepare their mindset and set intention for the upcoming journey.

“Preparing something to drink is a ritual. Any technique that requires just a little bit of attention to a few variables focuses one’s awareness,” explained a 32-year-old who’s had mushroom tea around 20 times. “It’s part of a process of creating a space for an experience… [and can function] as a grounding exercise to allow the person to ‘be in the now’ for the duration of their drink.”

Besides making the magic mushrooms come on a little faster and possibly stronger, some folks report that the type of tea bag, herbs, or fruit they mix with their shroom tea can also have an effect on their mushroom experience.

“Anytime you drink a tea it changes your subjective experience,” says James W. Jesso, host of the Adventures Through the Mind podcast and author of Decomposing the Shadow: Lessons from the Psilocybin Mushroom. He explains that when you drink a tea, it has a certain effect on your experience: Whether that’s a calming sensation from lavender or an arousal effect from Catuaba bark,” says Jesso, “the art of tea is the art of herbal alchemy.”

Jesso also brings up psilocybin’s ability to change one’s “feeling state” to one where “feeling is an act of perception.” And that, perhaps, we’re extra perceptive to how our herbal teas are affecting us when we mix them with psilocybin. Lindsey Bartlett, cannabis industry writer and editor at Green Entrepreneur reports something similar: “I add in other tea ingredients for digestion and happiness, like tangerine, turmeric, white tea, marshmallow root, or peppermint.” Bartlett also says that she’ll add some seasonal fruit to her brew, and the trip itself can feel seasonal in turn. “In winter I was using blood orange juice and peels. The tea turned this deep, deep red and the trip was equally deep.”

Read: How to Take Shrooms

Jesso also takes this idea one step further, that psilocybin-containing mushrooms are intelligent and speak to us in a way. Therefore, by combining psilocybin mushrooms with other plants in the form of a tea, we’re essentially opening up a line of communication with the intelligence of these other plants.

“If I’m working and living with a plant, if I’m consuming ashwagandha every day, for example, and I’ve been really trying to bring its effects into my body and change myself on some deeper level by having a relationship, then at some point, it might make sense to explicitly combine it with psilocybin to more deeply explore what that impact is,” explains Jesso. “Because I’m able to think and feel into myself in a deeper way [on psilocybin]. And like I said before about the intelligence of psilocybin, I think there’s a deeper capacity for the psilocybin to facilitate a dialogue between myself and the ashwagandha that otherwise wouldn’t be there, because ashwagandha doesn’t talk in human language the same way psilocybin seems to do when you take it.”

There are lots of different mushroom tea recipes online, but I like to keep it simple. I’ve followed the recipe below many times with great results and no loss of potency as far as I can tell. In fact, the majority of my survey respondents also reported a similar method with some minor alterations.

Optional if nausea is your main concern: Strain out mushroom bits with a strainer and only consume the tea.

In the end, making your magic mushrooms into a tea can slightly alter the experience and make consumption a little easier on your taste buds and digestive system, but be prepared for it to come on a little faster and possibly stronger than eating raw mushrooms. And remember, for the safest psilocybin mushroom journeys, always take safe use practices into consideration like we outline in our guide to taking shrooms. Enjoy and safe travels!

In the early 2000s, Johns Hopkins University began conducting rigorous double-blind, randomized clinical trials investigating the potential of psilocybin—the psychoactive component in magic mushrooms—for end-of-life distress, or anxiety and depression in terminally ill patients. Prior to administering psilocybin to terminally ill patients, they had to conduct studies, required by the FDA, to ensure that psilocybin was safe for healthy adults. Since then, there’s been numerous studies at prominent institutions such as New York University, UCLA, Imperial College London, and others, that have confirmed that psilocybin is not only not addictive, but that it actually holds promise for treating substance use disorders, including alcoholism, nicotine addiction, and cocaine addiction.

Risks of Shrooms and Psilocybin Tea

When drinking shroom tea, it’s important to recognize that your trip will likely be stronger and kick in sooner. Make sure that you are in an environment where you feel safe and supported if it’s your first time drinking shroom tea. In general, as mentioned, studies have found that psilocybin is relatively safe, but there are exceptions. People with schizophrenia, bipolar, a personal or family history of psychosis, or a heart condition should not do shrooms, unless they’ve consulted with a psychedelic integration therapist or physician first.

As mentioned before, the qualities of the tea you choose—whether it’s relaxing, energizing, clarifying—will combine with the effects of the mushrooms and shape your trip. So be mindful about the type of tea you choose. There’s also a few different ways, in addition to our basic recipe above, that you can do this, depending on how ritualistic you want to get.

Of course, psilocybin mushrooms aren’t the only kinds of mushrooms with which you can make shroom tea or tinctures. Indeed, ancient Chinese and Tibetan medicine, for instance, integrate other fungi varieties like Cordyceps in combination with herbs like ginger. Traditional healers recommend C. sinensis species like Yarsa gumba or Keera jhar for disease treatment alone, or with other herbs. Other medicinal mushrooms like shiitake, reishi, or maitake have also been used in cancer treatments, in combination with lemon juice, coconut milk, green tea, vanilla, and more. 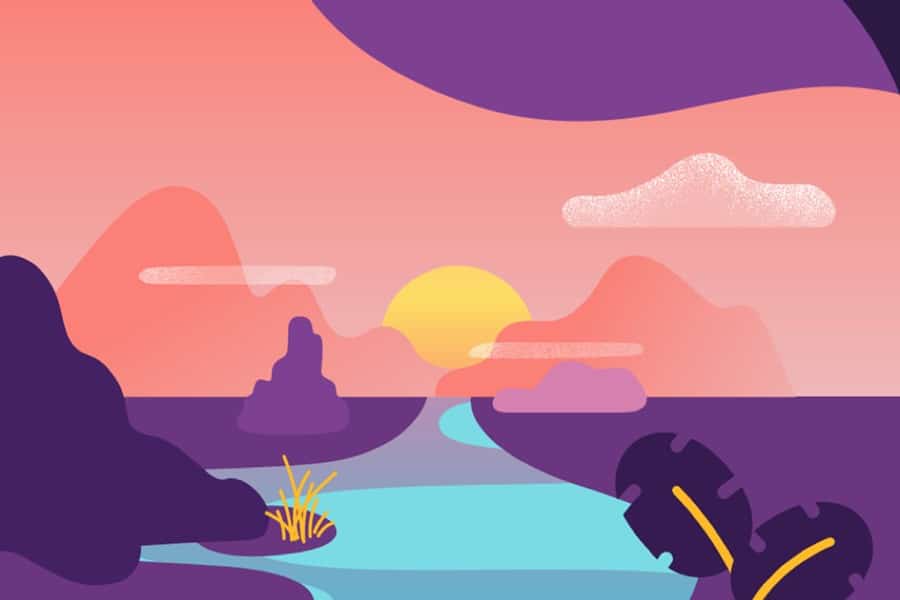 This App Guides You Through Tripping

"Trip" helps users dive into their consciousness—whether with psychedelics or mindfulness techniques like meditation.