There’s Now a Shroom Dispensary in the US

With gummies, powders, and capsules on sale, this Florida shop says they’ve found a legal loophole

The shroom boom continues to spread across North America as psychedelic entrepreneurs test the appetite of law enforcement to extinguish it. But, in Florida, one hemp dispensary found a creative workaround. Chillum, close to downtown Tampa, is selling Amanita muscaria, the red and white spotted shroom depicted in a popular emoji. It can be sold legally because it does not contain the prohibited psilocybin.

Chillum now advertises itself as a “mushroom and hemp dispensary,” and it is seemingly the first of its kind in the US. Since garnering a wave of media attention, founder Carlos Hermida claims his store has seen an upshot of visitors after the dream-inducing, psychoactive shroom went on sale in August.

“This is a very misunderstood mushroom,” he tells DoubleBlind. “But the fact that hardly anyone in the Western world paid attention to it meant that it was never made illegal because it never became a ‘problem.’ It’s almost a blessing in disguise.”

A. muscaria, commonly known as fly agaric, contains the psychoactive compounds muscimol and ibotenic acid. It is illegal in Louisiana, which has particularly tight laws on tripping. Often falsely thought of as deadly due to the likelihood of vomiting and diarrhea after consumption—especially raw consumption. From raw consumption, it is also prohibited in Holland, the UK, and Romania. But it is not controlled in the vast majority of the US.

The iconic mushroom has a long history of usage in Siberia, specifically in the Kamchatka peninsula around where the word shaman derives. Tribes “collected amanita, dried it in the sun, and consumed it either whole, in a water or reindeer milk extraction, or mixed it with plant juices to sweeten its flavor,” says ICEERs, a psychedelic advocacy nonprofit.

“Many individuals report that the fly agaric experience can be a positive one, with feelings of euphoria, and a sense of being within a dream-like space,” according to Third Wave. “After an hour or two, some people awake to a sense of having awoken to a different world—things appear the same, yet undeniably different in an inexplicable way … down the rabbit hole and into wonderland!”

Yet, it’s important to mention that the A. muscaria experience is not the same as psilocybin—or other classical psychedelics, for that matter. Muscimol, Amanita’s primary active compound, engages the same pathways in the brain as alcohol and has sedative, hallucinogenic, and deliriant properties that can take you out of reality. Amanita and psilocybin mushrooms are also prepared and dosed differently.

And while the Amanita experience holds personal and spiritual significance among several cultural traditions and individual explorers, trips can be challenging and uncomfortable in ways uncharacteristic of classical psychedelics. Accidental injury, distress, and physical illness are well-known risks of Amanita, particularly with high doses. Advocates recommend having a sitter to help prevent accidents—like walking into traffic or falling asleep in the cold. (We encourage you to read DoubleBlind’s full guide before partaking.)

Read: The Trippy Truth About Amanita muscaria, The World’s Most Famous Mushroom

Some believe the mushroom has been used across the world since ancient times. “The fungus grows naturally in the highlands of Mesoamerica and some mushroom myths and sculptures suggest the use of Amanita muscaria in Guatemala and southern Mexico at the time of creation of the Mayan civilization, around 1500-1000 BC,” adds ICEERs. Indigenous usage in both northern Canada and around Lake Michigan, where it was known as miskwedo, has also reportedly been documented.

Now, regulators in both the US and Canada are considering legalizing psilocybin mushrooms for medicinal use. The US federal government is preparing for the legalization of psilocybin in conjunction with therapy within several years, while a special access program is underway in Canada for those in emergency medical need.

A gray-area domestic industry is also mushrooming in Canada. A number of shroom dispensaries have popped up in both Vancouver and Ottawa this year in protest against “unjust” laws. “We’re out here protesting every single day,” Jordan Armstrong, operator of The Golden Teacher magic mushroom shop in Ottawa, told CBC. “And laws that are unjust don’t change unless you go out and you make a statement about it. So we’re looking to change laws that we believe are outdated.”

While the mayor of Ottawa called for the stores in his province to be shut down, cops in British Columbia have indicated they see little public interest in busting the outlets. “[We] continue to target violent and organized criminals who produce and traffic harmful opioids, which fuel gang violence and contribute to the ongoing health crisis of illicit drug deaths,” a police chief told CBC.

For his part, Hermida has no plans to work outside of the law, although he does sell legal mushroom grow kits that clients must sign a form pledging not to use for psilocybin-containing fungus. “I would sell psilocybin if it was legal, but I don’t have the balls,” he says. “I’m an activist, I will work to change the laws. We’re going to create the mushroom revolution. But I’m here to comply with laws.”

Hermida, who campaigned to legalize medicinal cannabis in Florida, hopes that other businesses in the state—which is yet to sanction recreational weed—will follow his lead and start selling fly agaric so that the industry is of such a size that lawmakers would find it more difficult to shut down. “I want this mushroom out there as much as possible,” he declares. “So please copy me. There’s already been a few people in Tampa that have renamed themselves mushroom dispensaries: I’m flattered and I encourage it.”

Outside of the sunshine state, the possible influence of the enigmatic hallucinogenic mushroom cannot be underestimated. The Super Mario mushroom and the Smurf houses bear a striking resemblance, and children’s literature is filled with illustrations of fly agaric. In 2017 a New York Times columnist controversially wrote that it was not far-fetched “to propose that the story of our modern Santa Claus, the omnipotent man who travels the globe in one night, bearing gifts… is linked to a hallucinogenic mushroom-eating shaman from the Arctic.”

Read: Where Are Magic Mushrooms Legal?

The writer noted that “the shamanic rituals of the Sami people of Lapland, a region in northern Finland known for its wintry climate and conifer forests, bear an uncanny semblance to the familiar narratives of Santa and Christmas that we have come to know.”

“Shamans’ psychotropic journeys are believed to be related to the idea that Santa Claus travels with his sleigh and reindeer through the skies to deliver gifts,” says the Fungi Foundation, a mushroom advocacy nonprofit. “The gift given by the shamans was the knowledge that the mushroom gave them, in addition to sharing portions of it among those present.”

Another popular yet flawed theory is that the modern conception of Santa was based on Coca-Cola’s brand. Even zanier, renowned philologist and Dead Sea Scrolls scholar John Allegro claimed in his best-selling book The Sacred Mushroom and the Cross that a fertility cult which sacramentally consumed fly agaric was central to the creation of early Christian theology.

“They may not come down the chimney, but they’re sent to us via courier delivery,” adds Hermida of his mushrooms. He procures the supply from a wholesaler in Las Vegas that sources from a company working with foragers in Lithuania. The mushrooms are treated to reduce their toxicity and make them consumable as a mixture of gummies, capsules, and powders which, Hermida says, can be smoked or swallowed. “I’m not a spiritual man, I identify as an atheist,” says Hermida. “But I do feel more spiritual when I take this mushroom: I just feel more connected.” 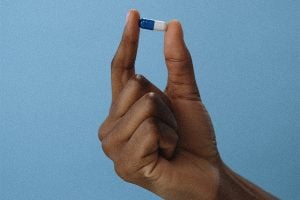 MDMA Therapy is Almost Legal—But Who Will Have Access?

MDMA for post-traumatic stress disorder will likely be legal in the next two years. This is what we know about what it will look like.

There are few animals as frightening and as fascinating as the snake. So why exactly have we obsessed over them for 70,000 years?