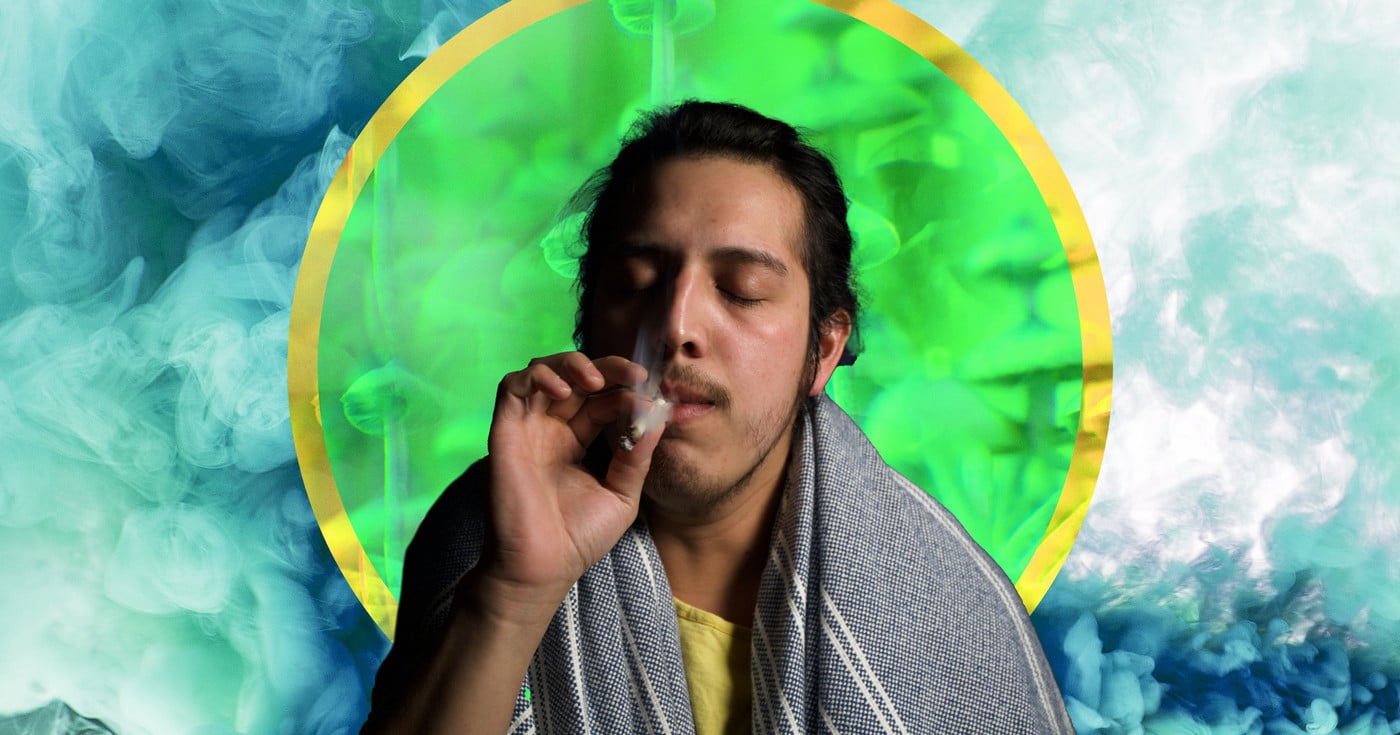 Can You Smoke Shrooms?

Yes and no—but should you actually try?

Table of Contents
1 What Are Shrooms?
2 The Magical Mushroom Experience
3 So Can You Smoke Shrooms? What the Internet Had to Say
4 Health Concerns Front and Center of Smoking Shrooms Debate
5 How to Consume Mushrooms—Instead of Smoking Them
6 When It Comes To Magic Mushrooms, Keep It Simple

Psychedelic culture is continuing to evolve, leading to all types of new and exciting questions. “Could microdosing ease chronic pain?” “Can having an orgasm literally make you trip?” “Will plant medicine end the opioid crisis?” These are questions with complex answers, but some may be asking more simplistic queries, like this one that’s currently making its way across the interwebs: Can you smoke magic mushrooms?

The short answer: Sure, technically. But is it a good idea? And if not, what are the best ways to take shrooms?

DoubleBlind breaks it down.

The term “shrooms” refers to any mushroom containing psilocybin, a compound known for its psychedelic effects (the psilocybin is what makes them magic!). There are nearly 200 known varieties of psilocybin mushrooms on the planet with the most prevalent being psilocybe cubensis. Used in rituals and as a sacrament throughout history, psilocybin has been touted in modern times as a potential treatment for a variety of mental health disorders including depression, post-traumatic stress, and addiction.

While psilocybin has been considered a Schedule I narcotic on the federal level for nearly 50 years, there is a growing movement taking place to end prohibition of this compound, while research continues to mount, showing evidence of psilocybin’s abilities to treat a number of mental health conditions from depression to addiction and even eating disorders.

The effects of shrooms vary depending on the dose and variety, but the psilocybin journey has been deemed by science to have downright mystical potential. It may include light visual hallucination, feelings of euphoria (although anxiety can occur), “ego death,” and the sense that time isn’t what it seems. Shrooms typically kick in within 30 minutes to an hour with the trip lasting up to eight hours or so.

The spectrum is vast in the emotional coaster that is a mushroom trip, with giddy laughter leading to tears in a manner of minutes. I like to call it an exercise in mindfulness, for when unpleasantness arises, one must simply shake out the sillies and bring the mind back to the present moment.

So Can You Smoke Shrooms? What the Internet Had to Say

The typical method of consumption for magic mushrooms is oral ingestion (more on that later) but can you smoke them? Is it even a good idea?

A popular thread on Reddit with the title “People out here tripping balls after smoking shrooms” discusses the possiblity of smoking ground-up mushrooms, often as a companion to cannabis inside joints or on top of a packed bowl. While no one self-reported their exact dosage, it can be assumed based on the typical size of a bowl and joint that the amount of ground material was somewhere between 0.05 and 0.3 grams — which is already considered a microdose of psilocybin and not quite enough for most people to “trip balls” so to speak.

Nearly all of the anecdotal reports of those who did experience psychoactivity indicate a mild high when compared with eating mushrooms. One Redditor, who has since deleted their account, had this to say:

I’ve smoked a pack of weed with shrooms ground on top and I definitely experienced a mild trip. It was pretty subtle and lasted only about half an hour, no visuals, just weird headspace. I did it with other people too and they all described similar experiences. You could argue placebo, but idk… felt real to me.

To this Redditor’s point, the perceived effects may be more of a placebo than an actual psychedelic experience, especially due to the fact that psilocybin starts to deteriorate rapidly when exposed to high heat, majorly reducing the potential for psychoactivity.

User Valmar33 also claimed to experience a bit of psychoactivity from smoking mushrooms but with nowhere near the typical effects of a traditional psilocybin trip:

I’ve smoked a bit of dusted shrooms and got a small buzz. A better, cleaner, clearer high than weed, that’s for sure. I didn’t trip, but felt a lot of mental clarity.

Aspergillosis, a respiratory infection caused by exposure to fungus, is one of the greatest risk factors and could lead to severe illness including blood vessel damage. Other symptoms include wheezing, shortness of breath, fatigue, headache, and skin lesions. Treatment for aspergillosis will vary depending on the severity of the case but may include antibiotics or surgery for those with serious infections.

Bottom line: Smoking mushrooms simply isn’t worth it. Between the respiratory health risks from fungal exposure and the fact you’ll likely burn up the active ingredients, there’s simply no legitimate argument in favor of the practice. Sorry, Redditors!

How to Consume Mushrooms—Instead of Smoking Them

The best way to take shrooms is to eat them, allowing the psilocybin to enter the body via the digestive process. You can munch them straight up, with the average recreational dose being somewhere between one and two grams (although some people take more or less). Since the flavor and dry texture may not be appealing to all, there are options.

Mushroom tea is an extremely popular and potent way to take psilocybin. Ginger tea is a fantastic base since the root is a natural way to prevent nausea (a common side effect when coming up on shrooms). Lemon tekking is another prominent method of consumption, which sees the mushrooms soaked in lemon juice for 15 minutes or so, after which the whole concoction is downed like a shot. Both of these approaches are recommended for experienced psychonauts, since they can lead to stronger trips.

Chocolates containing ground shrooms are also a great choice since they’re tasty and simple to dose. Cacao and psilocybin mushrooms were actually used in conjunction during ceremonial rituals by the Aztecs, both considered to be gifts from the gods. This ancient interconnectedness makes this method that much more attractive as it speaks volumes to the true powers of both ingredients.

When It Comes To Magic Mushrooms, Keep It Simple

Psilocybin mushrooms have been consumed for centuries for a variety of spiritual and wellness-based reasons—and heck, even some fun. As interest in the compound grows, it’s only natural to wonder whether we’re missing out on something by only taking them in one way (well, one way with several variations).

When considering whether you can smoke shrooms, the answer is not “yes” or “no”—it’s “why would you?” After considering the risks as well as the lack of potential effects, this author’s judgment is a resounding “hard pass,” Reddit be damned. Microdosing Mushrooms: Everything You Need to Know

From dosage to effects, and everything in between, here's the ultimate guide to microdosing psilocybin. How Long Do Shrooms Last?

When considering the effects of shrooms, don’t just account for the length of the trip, but the integration period after.